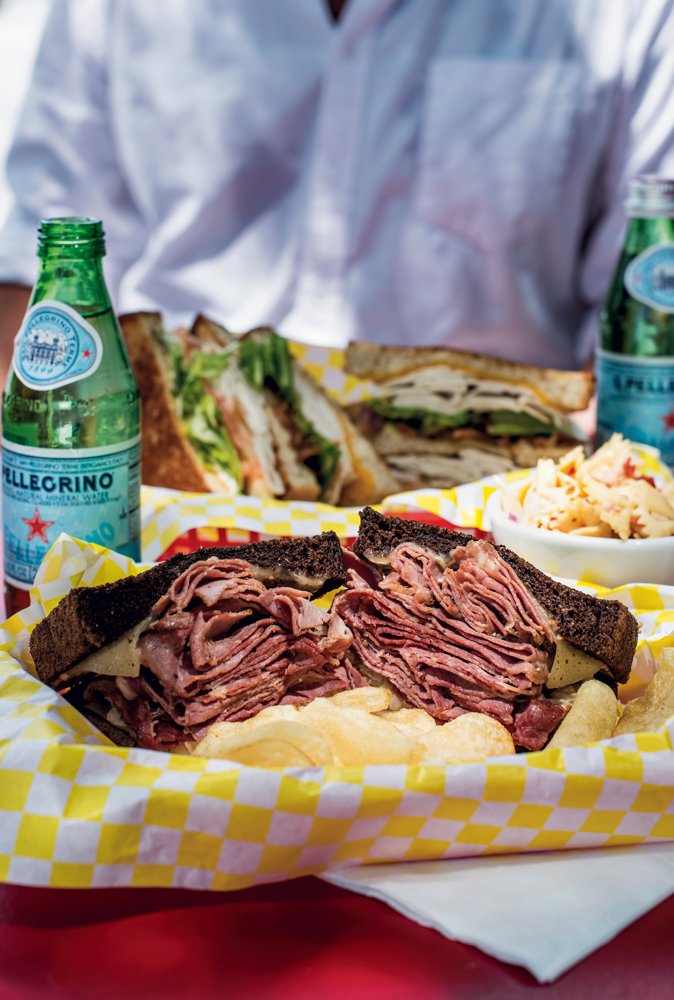 I had never eaten a Reuben before I visited Toonerville Deli. As a kid, this type of sandwich intimidated me. Maybe the flavors were too complex for my naïve palate. I wasn’t stuck on chicken fingers and French fries like some other youngsters, but what kid wants smelly sauerkraut on their sandwich? Not me.I bring up my previous aversion to the Reuben, a grilled sandwich traditionally made of corned-beef brisket, Swiss cheese, the aforementioned sauerkraut and Russian dressing on rye bread, because this sandwich is the Toonerville Deli’s specialty. It would have been wrong to bypass the Reuben because of my childish hesitation, especially when there are 10 versions of the sandwich at Toonerville.

I quickly learned that there is much more to the Toonerville Deli than its Reubens, one of which made me a convert to the joys of this grown-up sandwich. Toonerville Deli’s extensive selection of sandwiches (28 in total, ranging from $4.50 for a breakfast egg and cheese to $13.50 for a “3 A ‘Meat’ Os) makes this new establishment a welcome addition to the Old Louisville restaurant scene.

Most of the Reubens go for about $10, with most other sandwiches a buck or two less; all include bag of chips and some include a side dish. Toonerville’s focus on creativity and quality, especially when it comes to a Reuben, makes a sandwich from this deli a worthwhile treat.

Toonerville Deli occupies a quaint space at the corner of First and Oak streets in Old Louisville that was formerly Ermin’s French Bakery and Cafe. There are just a handful of tables in the restaurant, which makes this deli ideal for a grab-and-go lunch. At night, the deli transforms into Old Louisville Pizza Co. and serves pizzas, salads, flatbreads and a few sandwiches from the Toonerville Deli menu (in July, the owners will join the two restaurants). The owners of Toonerville, Daniel Borsch and Scott Lukemire, have already established themselves as a formidable duo in Old Louisville. The two co-own Old Louisville Tavern at Fourth Street and Gaulbert Avenue, which is undergoing repairs after an arsonist damaged the building in 2014. Borsch also operates Burger Boy, a 24-hour diner at Brook and Burnett streets.

As a fan of both the Old Louisville Tavern and Burger Boy, I expected hearty food and reasonable prices from the Toonerville Deli.  And I discovered that the deli knows how to serve a savory, filling sandwich that can last for two meals, or at least hold you over through dinner.

The Toonerville Deli creates hearty sandwiches for breakfast and lunch with inspired topping combinations that include flavored mayonnaise, plenty of flavorful cheeses and preservative- and nitrate-free deli meats. Some of the most interesting sandwiches include the Pigs Will Fly ($11) with chicken, salami, pepperoni, pesto mayonnaise and sun-dried tomatoes or the Scotty Doesn’t Know ($10), a concoction of roast beef, bacon, habanero jack and Gouda cheeses and chipotle-bacon mayonnaise.

Like a simpler sandwich? Toonerville Deli has that covered, too. For example, you can opt for a grilled cheese on Texas toast, which is $6 and comes with tomato-basil soup. The ham and cheese ($8) sounds plain, but the sandwich comes with applewood-smoked ham, Gouda and house-made honey mustard.

But the true star of the Toonerville Deli menu is the Reuben. The Reuben selection is great for a newbie like me. There are nine varieties, including a traditional Reuben called the Toonerville, that allow you to stick close to the original or venture out in search of toppings more in line with your preferences. For example, the Southern Expansion ($11) uses chipotle corned beef, jalapeno sauerkraut, cheddar cheese, slaw and barbecue sauce all on top of jalapeno cornbread to give the Reuben a hot, straight-from-Dixie twist. And the General Tso What? ($11) seems to dare Reuben lovers not to like this compilation of barbecue chicken, corned beef, sauerkraut, slaw and cheddar cheese on sourdough bread. These Reuben remixes might bemuse a purist, but the variations make this classic sandwich more approachable and fun. And it’s nice that these well-stuffed sandwiches come with chips and a small side.

For the $10 Challenge, I recruited my husband, Rob, to help me cover more of the menu than I could on my own. I grabbed the Czar ($11) from the Reuben menu and a turkey club ($9) for a weekday lunch for two.

One of the Toonerville employees said the turkey club is a customer favorite. My husband agrees. The club has three pieces of moist bread that holds thinly sliced turkey, cheese, crumbled bacon, tomato, lettuce and a truffle and tarragon mayonnaise that makes this sandwich stand above its peers.

The turkey club was good. But the Czar stole my affection that day. A huge pile of corned beef and pastrami is loaded onto black Russian pumpernickel and topped with tangy sauerkraut, Swiss cheese and a layer of Russian dressing. The saltiness of the meat complimented the sauerkraut well. The bread, which comes from Rotella Bakery in St. Louis, was soft, dense and provided a slightly sweet note to bring the whole thing together. Rob scoffed that this wasn’t a “real” Reuben. But I didn’t care. This sandwich was delicious and made me hungry for more corned beef. Add a bag of chips and a small side of pasta salad dotted with sun-dried tomatoes, and I was a delighted woman. Both sandwiches were large enough to eat half for lunch and save half for dinner.

The Toonerville Deli is sure to become an Old Louisville favorite with its interesting variety of sandwiches and hearty helpings. I know I’m eager to get back to make my way through the Reuben menu, now that I find that sauerkraut is not really all that smelly.

To  read  more  of  Ashlee  Clark-Thompson’s  work,  visit  her  blog
at  www.AshleeEats.com!

Letter from the Editor: On the backstretch (maybe) near the far turn