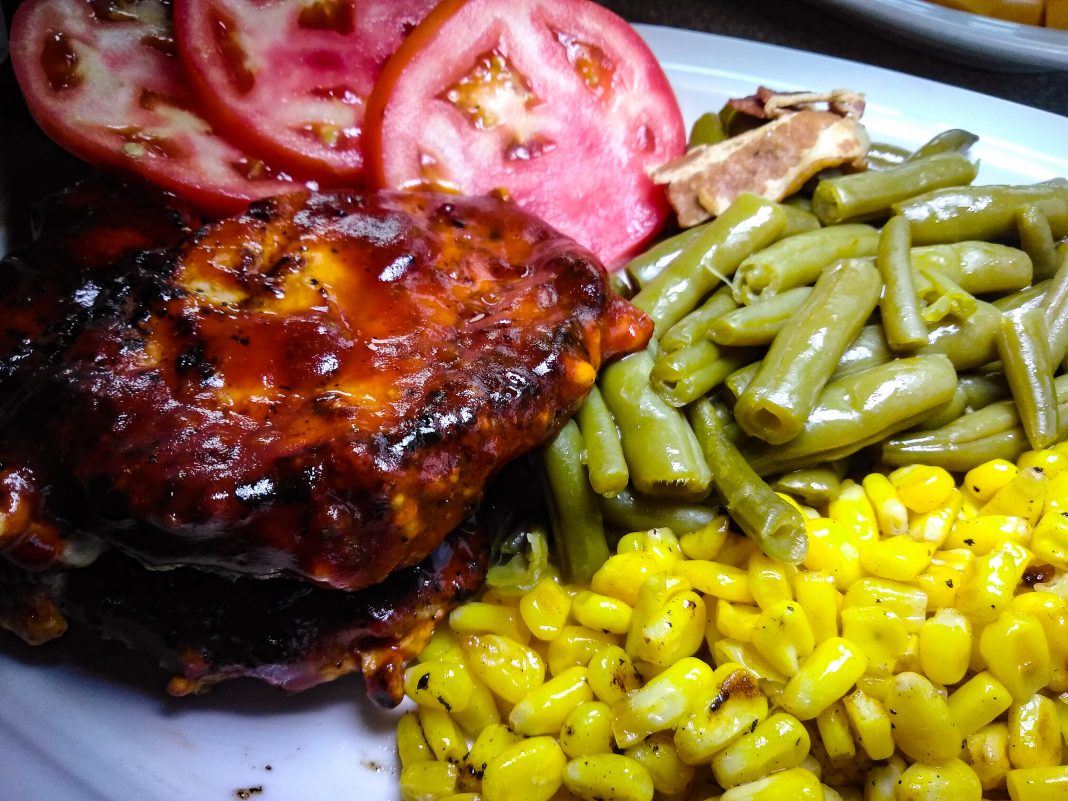 We’ve been following the Taste of the Bluegrass Culinary Trail to a lot of remote destinations throughout Kentucky this summer, but we recently pulled up to the beautiful lodge at Barren River Lake to enjoy our next stop and found it to be the most centrally located to a plethora of cool indoor and outdoor things to do. It makes it worth more than just a day trip from Louisville as you could easily spend a few days or even a week taking it all in.

One of the coolest things about this park is an outdoor sporting area as you drive in. It’s home to the Glasgow Highland Games, an annual festival celebrating the heritage of Scottish and Celtic people (the weekend after Memorial Day every year).

The drive up to the lodge from there is lined with beautiful trees, and the lodge itself has a very open feeling as you enter and pass a modern bar to the left and a gift shop (stocked with tourist items and locally made goods) or conference room down the hall on the right. We passed under a second-level reading area with shelves of books and chairs to get to Driftwood Restaurant, where we met Head Chef Brian Jones.

Jones started his culinary journey as a dishwasher and prep cook in an average American cuisine kitchen on a golf course in California, where he was born and raised. His boss quickly elevated him into cooking, because the elder chef saw he had a knack for it. Jones eventually ended up revamping the menu there and was pretty much running the kitchen by the time he was 18-years-old.

After that, he decided to relocate with nothing but a couple duffel bags to attend culinary school at the Art Institute in Nashville, Tennessee. Once he graduated, he wanted to be closer to family in Kentucky and discovered a position open at Barren River Lake where he worked his way up to be the head chef.

“I love it here,” he said. “Everything is a lot slower. I grew up in San Francisco, and I love the slower pace here.”

This meal (meant to represent the region of Caves, Lakes and Corvettes) rivaled the unbelievable amount of food we had at Kentucky Dam Village, although the meal price was $4 higher and did not include an alcoholic beverage. It did include a huge plate of two cheese types from Kenny’s Cheeses with crackers and sugar coated grapes for an appetizer before the arrival of another huge plate with two barbecue pork shoulder chops, sweet corn and green beans with ham hock. I easily made three small meals of these two dishes alone (including the lunch and then leftovers), but they were followed by a whopper dessert: a bowl sized scoop of vanilla ice cream on top of either blackberry or peach cobbler. My friend and I each chose one, so we could sample both. They were both delicious thanks to Gwendolyn Ennis, who Jones said is known for cobbler and has been making them for the park for 25 years. She’s about to retire, though, so you better make the trip if you want to taste this delight. I’d say this meal truly reminded me of a Southern picnic or potluck.

Aside from the heritage meal, Jones said that rib eye steaks and his chicken tortilla soup (black beans, hominy, tomato, chipotle, and green chiles with little fried tortilla pieces on the side) are very popular at the lodge. He also admitted that he likes cooking Southern food, but his favorite food to cook and eat is Japanese, which was his focus in culinary school.

“I’ve always been fascinated with Japanese culture and like visiting Shogun in Glasgow. It’s kind of funny I ended up somewhere like here, but I also like Southern food,” said Jones. “I love to make tempura. Tempura sweet potatoes are probably my favorite.”

Speaking of cool things and good eats in surrounding areas, you can find plenty to do with a 20 to 45 minute drive. Arts and antique shopping in nearby Glasgow, a whole slew of attractions in Cave City ( Kentucky Down Under, The Alpine Slide, Dinosaur World and Mammoth Cave), or the Corvette Museum or Underground boat ride at Lost River Cave in Bowling Green all make this perhaps the best state park to lodge at if you want a vacation with a lot of variety for the whole family.

Jones also told us about the legendary Dovie’s Burger in Thompkinsville, which has been around since 1940 and still uses the same oil since they started with. “I’ve eaten there and it’s great,” he said. You can get your burgers squeezed or unsqueezed.”

I also thought this was the best beach so far, though the park features a variety of other activities. We were able to drive right up and park near the pristine beach and changing rooms/bathrooms, which featured clean and centrally located outdoors shower rinse off areas. The beach also featured unmanned lifeguard stations with a stock of emergency rescue supplies. After that, we headed to Bowling Green to finally visit the Corvette Museum, which both my friend and I had been passing for years when always on a schedule and saying “one day.” However, we were still far too stuffed to enjoy any more than a coffee at the diner there — and even that was tough to cram in.