Home MAGAZINE ARTICLES FEATURE STORIES 8UP — Starting Out On Top 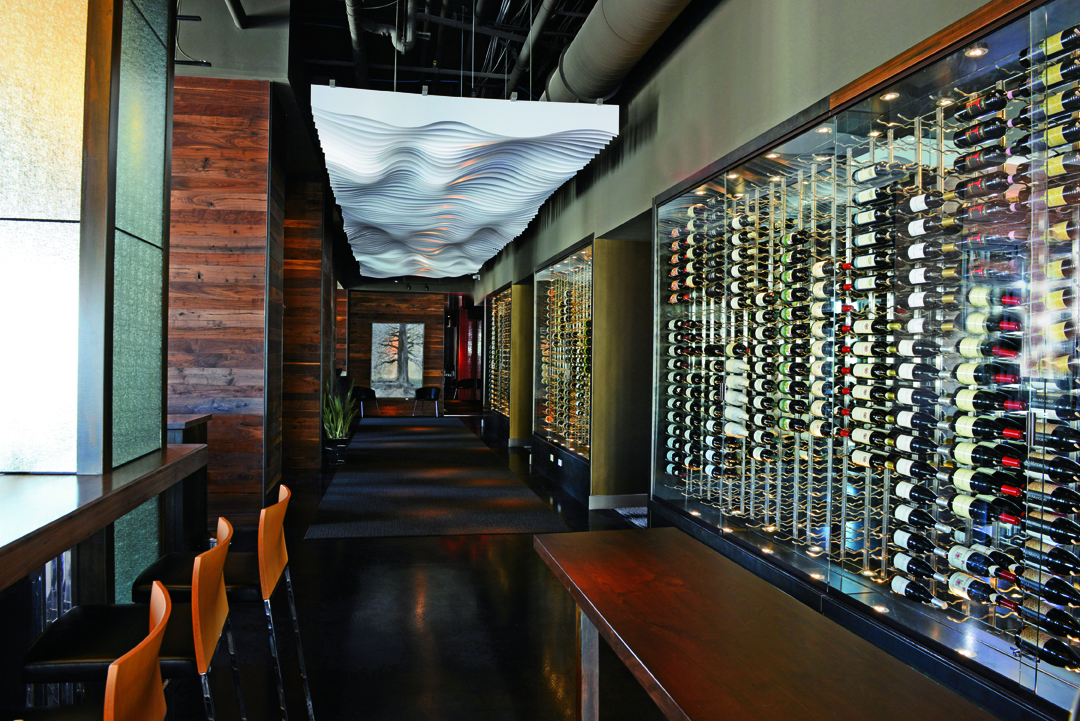 Located atop the Hilton Garden Inn at Chestnut and Fourth streets, the striking dining spaces of 8Up offer several ways to enjoy a brand-new view of the city, from the intimate fine dining room to the vibrant lounge to the breathtaking open patio — all with maximum enjoyment in mind. As developing partner Todd Rushing says: “We do fun well.”

As a big-city restaurateur looking for new opportunities, Todd Rushing knew from research that Louisville had the essential ingredients for success: A burgeoning food culture. Talented chefs. Legendary traditions. 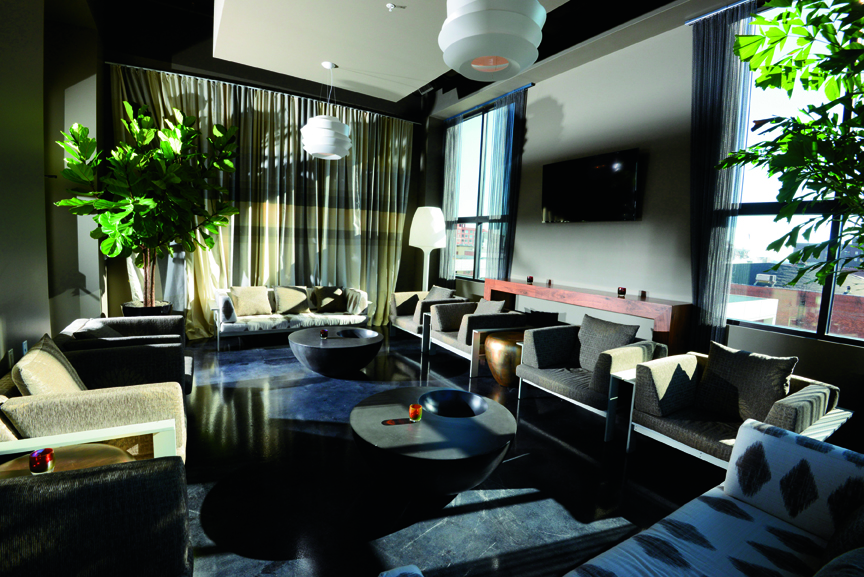 But when Rushing, a partner in Atlanta-based Concentrics Restaurants, first visited here two years ago, he found something distinctive and special: Louisville’s charm.

“Louisville is growing into a bigger city, but it has this wonderful appeal of being able to make you feel at home,” he said. “I don’t want to call it a town; it’s not that. But it does have that sort of homey-ness. Living in Atlanta, we don’t have that. …I thought, ‘This is something I want to be a part of.’”

To use the Southern colloquialism, you could say that Rushing was “ate up” with Louisville. Or, to be more accurate, 8Up with it.
That’s the name of the indoor-outdoor rooftop bar and restaurant that Rushing and Bob Amick, owner and founder of Concentrics Restaurants, opened in November on the eighth floor of the new Hilton Garden Inn at the corner of Fourth and Chestnut streets. (The restaurant operates independently of the 164-room hotel but does serve breakfast and provide in-room dining.)

Reached by an elevator that only goes to 8, the 10,000-square-foot space has been divided into four intimate areas that include a lounge and a fine-dining restaurant, each with its own kitchen, menu and staff. Between them, a Board Room equipped with wi-fi and screens may be reserved for business meetings or opened to enlarge either dining area via folding glass walls. The plush Garden Room, which may also be reserved, leads to the 4,500-square-foot patio that will open in the spring. The glass-paneled wall between the lounge and the patio can also be folded back in fine weather.

With space that can morph,” Rushing said, “you can have different experiences – you can be outside on a beautiful day; have just dinner; have just a bar experience; or be part of a private party.”

Concentrics owns and operates seven restaurants in Atlanta and two in Charlotte, N.C. Acting as a consultant, the company has created and developed more than two dozen restaurant concepts for other clients. Concentrics also designed and manages Juniper and Ivy in San Diego and three restaurants in St. Louis, including Three Sixty atop the Hilton St. Louis at the Ballpark, which overlooks Busch Stadium and the Gateway Arch.

In 8Up,  Amick and Rushing are again partnering with FHG, the hotel management company behind The Wit Hotel in Chicago, where the three dining concepts they created include a rooftop restaurant called, appropriately, Roof. 8Up is Concentrics’ fourth rooftop concept – but no two of its restaurants are alike.

In expanding to Louisville, the Atlanta company joins what appears to be the next evolution of the city’s dining scene: investment by national backers who want to create unique restaurants, rather than just open another iteration of a chain concept. Indianapolis-based Cunningham Restaurant Group (CRG), which owns 14 restaurants in Indianapolis, Cincinnati and Lexington, is scheduled to open Mesh this spring on the site of the old Azalea on Brownsboro Road, for example, and celebrity chef and restaurateur Bobby Flay is scouting locations in Louisville.

Marty Rosen, who has covered the local restaurant scene extensively for F&D and The Courier-Journal, traces this trend to the opening of St. Charles Exchange in 2012 by a partnership involving the operators of two well-regarded restaurants and bars in Philadelphia. “There are no other places called ‘St. Charles Exchange.’ They came in and created something new,” he said. “These new investors are trying to emulate some of our locally grown concepts. They realize that Louisville is a food-rich city.”

Because of that, Rushing and Amick have been careful not to come off as the “big-city boys” coming in to tell the locals how it’s done. They respect the local culture and want to become part of it.

“You can’t be successful if you go in and tell people you are going to show them,” Rushing said. “Every city has its own culture, its own way of doing business. If you don’t want to be a part of that, you become an outsider. We have a responsibility to be a good steward of Louisville. We are hiring people from Louisville and becoming part of the community, understanding it and making friends with it.”

Bourbon, of course, is a big part of the Louisville scene, and the amber nectar will be the focus of 8Up’s beverage program, Rushing said. The bar already stocks 80 to 90 brands, and he intends for 8Up to join the Urban Bourbon Trail.

Concentrics tapped Sean Thibodeaux, who spent the past year at St. Charles Exchange, to be 8Up’s beverage director. Thibodeaux is “working very hard to train his staff to be able to talk about bourbon, something Louisville is very proud of,” Rushing said. “We will certainly be seeing hotel guests from other parts of country and the world – we want to be able to paint that picture for them.” Several of the cocktails ($8-$12) include bourbon or have names that reference the area, such as the Downtown Derby, with Old Forester Signature, and the Cherokee Triangle, which includes Bulleit bourbon and brandy from Louisville’s Copper & Kings.

8Up will also have a robust wine program. The three climate-controlled glass wine walls that patrons pass on their way into the space can hold more than 1,400 bottles.

The contemporary American menu was developed after the owners spent some time in Louisville, learning the city’s flavor profiles and meeting local suppliers. As much as possible, Rushing said, “we are buying from local farmers and other artisans, whether that’s buying bread or buying china.”

In the lounge, which can seat 100-120 people and where the vibe is high energy and comfortable, the menu focuses on small plates – pizza from the exposed wood-fired oven ($12-$14), tapas such as chorizo-stuffed dates ($9), duck nuggets with umami sauce ($10) and pickled shrimp ($11). “The idea was creating things that people would like to have while drinking or socializing – lots of sharable items,” Rushing said. “We don’t course them; we have them come out as they’re ready. It creates a convivial atmosphere.”

The 90-seat fine-dining room is more structured and upscale, a place where “we take care of you, whether it’s a first date or a celebratory birthday or anniversary or a business dinner,” he said. Items prepared in this space’s open kitchen come in Small (mac and cheese with Spaetzle, Gruyère, mahon and bacon, $10), Medium (chicken-fried quail with sweet and sour squash and red wine gravy, $13) and Large (Gulf red snapper, $27, hanger steak, $28). There are also two Extra-Large options meant for two: a 24-ounce rib eye steak ($52) and a bacon chop ($38), a two-pound pork chop with the bacon still attached.

With mahogany walls, the dining room has a dark, intimate feel at night, but pinpoint lighting above each table means that diners never have to strain to see their menu or their food. Chandeliers covered with red fabric and a wall of banquettes along one side of the space help absorb noise, and bar and wait staff travel along a pathway hidden behind the banquettes so they aren’t constantly moving through the dining room.

That’s all the work of Amick, who is known for his obsession with space and light and his ability to transform atypical locations into appealing restaurants. His attention to detail and sense of whimsy are evident throughout 8Up, where each space has its own personality. The design is clean and sleek and punctuated by pops of red – like the oversized, pod-like upholstered chairs in the lounge, whose décor has been described as “Alice in Wonderland” meets George Jetson.

Even the restrooms are clever: When the door of each of the seven individual rooms – two women’s, three unisex and two men’s – is closed and locked, a red light illuminates a panel in the floor in front of it to show it’s occupied.

“It’s all about giving a space a unique sense,” Rushing said. “The food and beverage, the look of the menus, the look of the staff, they all blend together to create the experience. That builds the energy of the space and gives it a soul, so that you have that lasting memory when you leave. There are lots of very great restaurants that don’t have a great look. Some have a great look but may not be very good. We want to tie that all together. Eating out is all about memory.”

The patio was finishing construction in early February. When complete it will have a four-sided bar with two TVs on top, a video wall, seating areas and tables with fire features down the middle.
But even on a chilly overcast day, its best feature was already evident. The views, more than anything, are what set each of Concentrics’ rooftop restaurants apart, Rushing said. “In Chicago, it’s Lake Michigan. In St. Louis, it’s the Arch, and looking into Busch Stadium. In Louisville, it’s a view that really makes Louisville feel like a city – that can touch the heartstrings of folks who grew up here.”

He was on the patio recently with such a fellow, Rushing continued, “and he said, ‘I’ve never seen the city this way. It makes me feel good.’ Especially at night, it’s beautiful. And it can make someone who was born and raised here think, ‘What a city.’ ”