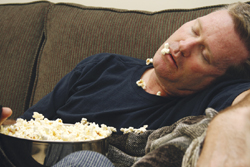 Opinion is divided regarding the Food Network on cable television these days.

Some complain that it has gotten away from its roots. Instead of a real chef in a real kitchen cooking real food, critics grumble, we get Rachael Ray scrunching her nose at the camera as she dumps a can of mushroom soup over a frozen chicken breast and exclaims “Yum-O!”

Others object that Food Network shows lately are increasingly oriented around entertainment value rather than their instructional merits. While George Duran from Ham on the Street makes a good case that a professional laundry’s steam press can indeed be used to make a great supersized Cuban sandwich, the practical value of such knowledge seems limited to extremely hungry members of the national dry-cleaning community.

Personally, I’ll be the first to admit that I’m a fan of the entertainment factor. I’m kind of tacky that way; I prefer to be entertained than to actually learn things. But I do understand why serious food enthusiasts are concerned.

I can see parallels between this and what happened with MTV in the 1980s. When MTV launched, it was all about the videos. But as the station matured it began diversifying its offerings, offering scripted shows alongside its original fare. Over time, these shows almost pushed the music out of the picture entirely. The great 120 Minutes faded into a late-night timeslot as The Real World: Wherever climbed over the prime-time slots like kudzu.

Eventually MTV-2 was born, with the mission of showing the music videos that used to be MTV’s bread and butter. Or so I am told, anyway. I can hardly peel myself away from the T-Rowe Price retirement investing commercials on VH1, which, depressingly plays the kind of stuff I listened to in college.

I propose, then, a similar solution for Food Network! For Food Network’s equivalent of MTV-2, they could slough off the actual, instructional cooking shows like Molto Mario, and maybe fork over a ton of cash to buy the rights to all things Julia Child from PBS. Viewers who actually wish to learn how to cook things could watch this channel. Meanwhile, for the sensationalistic, tacky, lowbrow hyenas like me, the Food Network could amp up its scripted entertainment offerings with new shows like these:

$1,000 a Day with Paris Hilton: Paris hits the mean streets of SoHo with only $1,000 to spend at Balducci’s. Can she put together a tasty, nutritious meal of Cosmopolitans and Twinkies on time and under budget? Will Tinkerbell turn his nose up at the take-out sushi? Will pet kinkajou Baby Luv be jealous and initiate the battle of the pocket pets? Stay tuned …

The Sopranos’ Kitchen: The show might be over, but the spinoff is just heating up. Paulie Walnuts goes postal when Olive Garden fails to “honor” its offer of unlimited salad and breadsticks. Italian import Furio, already pushing his luck with Carmela, traps and eats the ducks from Tony’s swimming pool with frightening repercussions. Find out what happened to Artie Bucco’s meatballs.

Pimp My Kitchen: Sure, Food Network already has Kitchen Accomplished, but let’s kick it up a notch with this pitch: Rapper Xzibit pairs up with Ming Tsai to trick-out run-down kitchens with an extreme signature style. Be the first guy on your block to own a Wolf cooktop with a neon kit, triple-stack spoiler, and retractable griddle. And with the Nitro injector tied into the main burner line, you can boil water in less time that it takes a ZR-1 to smoke a ¼ mile.

Feasting with Felt: Alton Brown pairs up with The Swedish Chef of Muppet fame to recreate classic Norwegian dishes like lutefisk and pickled herring. The host’s witty banter includes such classic exchanges as this:

Alton Brown: Now chef, let’s show our viewers how they can create their own reindeer jerky using nothing but a common hairdryer and some fiberglass air conditioning filters.

American Smoker: What’s more American than cars and barbeque? Nothing. So here’s a show that blends the two pastimes. The mustachioed Paul Teutul Sr. teams up with Bobby Flay to outfit classic American muscle cars with custom-built smokers. The only thing finer than a 1968 Pontiac GTO would be a 1968 Pontiac GTO with a Lang Smoker Cooker welded through the fastback. Competition BBQ can now be street-legal, and your pit can smoke the quarter mile along with the pork butt.

Rachel Ray vs. Giada De Laurentiis: (Pay-Per-View Only) Thunderdome-style cage match between the two culinary starlets. Two Women Enter, One Woman Leaves! From the bars of the cages hang a wicked assortment of immersion blenders, potato ricers and rolling pins. Who will win? Giada is Italian, but I bet Rachel Ray fights dirty. My money is on her.

Truffle’s Landing: A soap opera set in the Périgord region of France where money, sex, and underground fungi combine in an explosive mix of passion and mushrooms.

Anyway, these are just a few starter ideas. I’m sure the creative folks at the network that came up with Rachael Ray and made Paula Deen famous can handle a concept like this. Now, if you will excuse me, I have to get back to VH1. The term life insurance commercial is over and they’re playing my song.