Home DRINK Abol Cafe: “Ethiopia is the most caffeinated country in Africa” 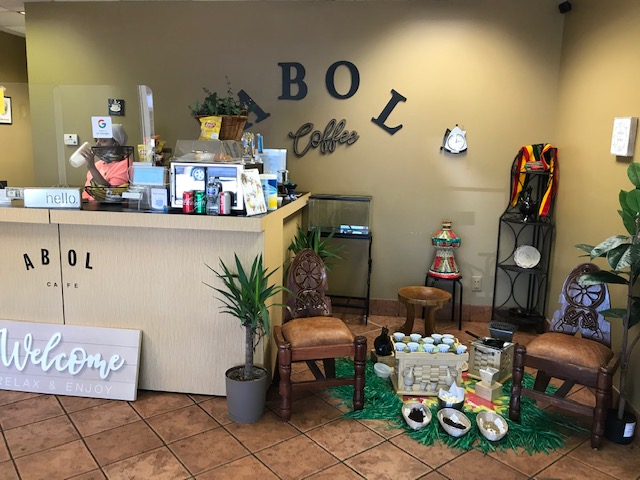 You might be curious to know what “ABOL” means. Abol is a word commonly used in the Ethiopian coffee ceremony process and it means first coffee brew. The first cup in every coffee brew is called Abol and it is very bold and with the best aroma. Ethiopian coffees are the best in the world with zero or minimal acidity level.

Abol Cafe opened in summer last year, and if not for a reader’s tip, I’d still be unaware; consequently, let’s play catch-up.

The Abol coffee shop is located at 102 Cannon’s Lane, by Frankfort Avenue, in space formerly occupied by Danish Express. In October, the Courier Journal’s Dahlia Ghabour charted the definitive back story: ‘Coffee is everything’ for this immigrant duo running Louisville’s new Ethiopian cafe.

You can visit Abol Cafe and grab your usual espresso drinks — lattes, cappuccinos and macchiatos are all on the menu, as well as regular coffee, tea and a few smoothies. But the stars of the show are the most traditional drinks, highlighted in bright yellow on the menu: the freshly-roasted and brewed Ethiopian coffee, Tosign herbal tea and the extremely popular whipped and iced Dalgona coffee.

Questions? Abol’s phone number is 502-384-9430, and the e-mail is info@abollouisville.com. For a deeper dive into the importance of Ethiopian coffee culture, visit The Spruce Eats.

One common Ethiopian coffee saying is “Buna dabo naw“. This literally translates to “Coffee is our bread”. It demonstrates the central role that coffee plays in terms of diet and illustrates the level of importance placed on it as a source of sustenance.