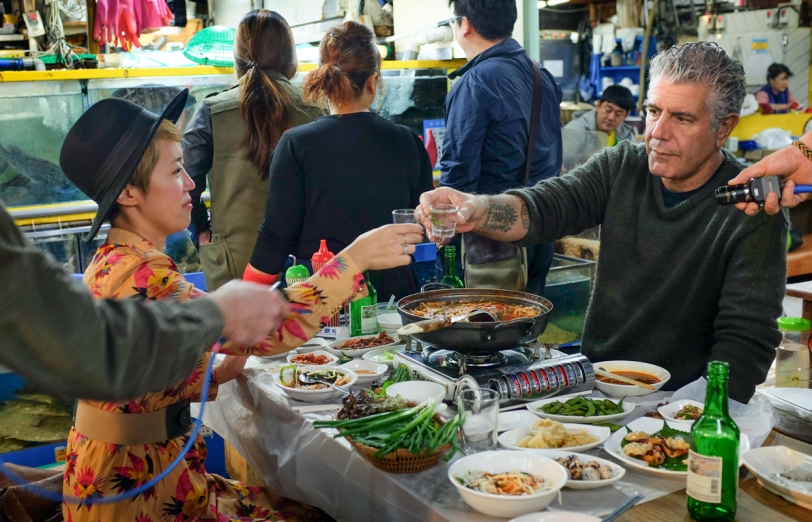 Anthony Bourdain’s birthday is June 25. Bourdain took his own life in 2018, and we remember him for various reasons, all of which combine to remind us that there is so very much to learn.

A thousand tatted bad boy chefs picked up (Bourdain’s) banner, but not his sensibilities. His politics bubble up in Kitchen Confidential when he tells aspiring chefs to learn Spanish, to learn “the distinct cultures, histories and geographies of Mexico, El Salvador, Ecuador and the Dominican Republic,” to eat their food, and to show respect. Years later, he confronted Americans with their hypocrisy for depending on Mexican workers and loving Mexican food, Mexican beverages, “Mexican music, Mexican beaches, Mexican architecture, interior design, Mexican films,” but not Mexico itself.

And, so very little time to learn it.

We all know that Bourdain inspired a generation to step into the kitchen, come what may, and now that he’s gone suicide prevention has rightly become part of his legacy. Beyond this, contemplating his life and work, it’s difficult to resist speculating about how Bourdain the journalist would be interpreting 2020.

Obviously 2020 has been a challenge to most bedrock assumptions. At a time when a mysterious pandemic clashes with awakening social justice consciousness in a partisan presidential election year, the food service industry often is being asked, in effect, to choose a team.

Some have, others not; the considerations are labyrinthine. As an example, LEO Weekly’s Danielle Grady has written an insightful essay: “Mixing business and politics: Restaurants promote racial justice.”

To see Bourdain completely as a wholly-formed thinker and doer rather than a source of food and drink inspiration alone is to have a good idea of where he’d be in 2020.

Writer Arun Gupta’s 2018 essay in the wake of Bourdain’s passing is the place to begin. Some will disagree with Bourdain’s point of view, but the worldview was an essential component of the man, as it is with us all. It’s who he was, and as with any such recounting, we’re free to form our own opinions about these facts.

Anthony Bourdain’s genius was not in the kitchen. His genius was in never mincing words and knowing which side he was on. Asked what he would serve at a summit between Kim Jong-un and Donald Trump, Bourdain said, “Hemlock.” He told David Duke, “I’d be happy to rearrange your knee or other extremities.” After visiting Cambodia, Bourdain wrote of Henry Kissinger — “that treacherous, prevaricating, murderous scumbag” — “you’ll never stop wanting to beat [him] to death with your bare hands.”

Journalists are not supposed to talk like this, at least ones hoping to retain a coveted network show like Parts Unknown. That CNN series nabbed Bourdain four of his five Emmys, and the sixty-one-year-old chef and author was in France filming an episode for the twelfth season when he hung himself June 7.

The obituaries and reminiscences about Bourdain miss who he was. He was more than a celebrity chef, a Hunter S. Thompson of the kitchen, a roguish culinary adventurer, or part Epicurean, part everyman. Bourdain was simply a journalist. And journalists can’t recognize him because they can’t recognize what real journalism is anymore. Bourdain was a chronicler of societies, of cultures, of people, of stories, of emotions. Food was his reporter’s notepad and pen …