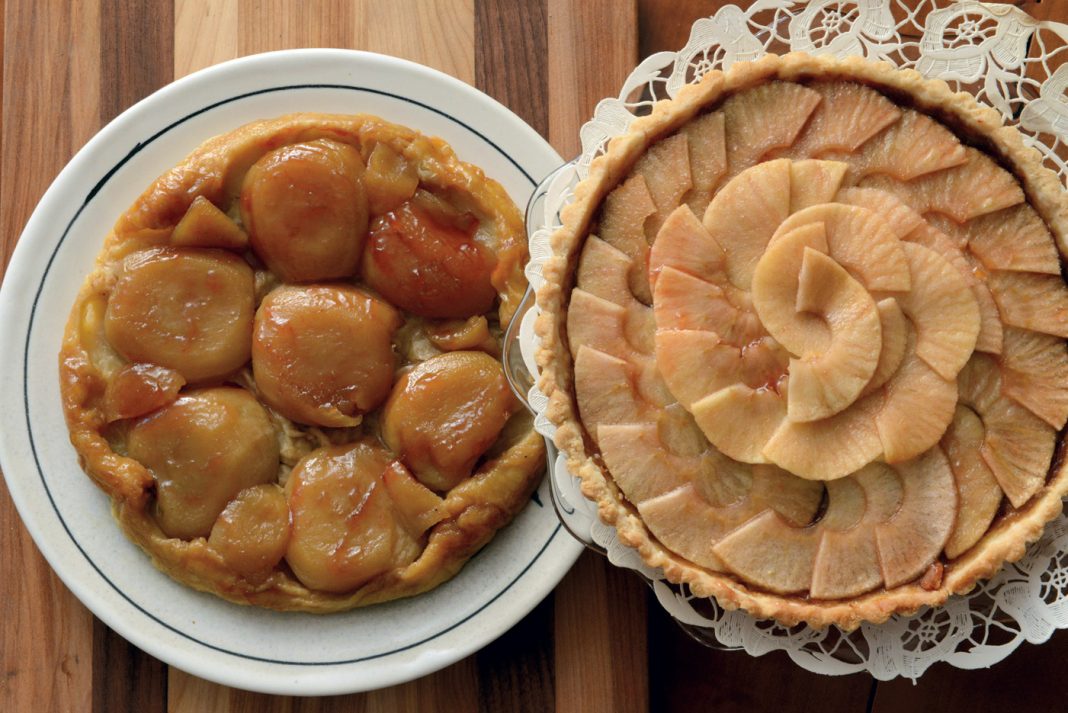 As Ron Mikulak explains, the two-crust apple pie familiar to generations of Americans can trace its origins to the European single-crust fruit tart.

An earworm from the past has haunted me lately, a 50-year old ad jingle that irritatingly popped into my head, but one, upon reflection, that offers an insight on how things have changed in America. The chorus of the jingle ran, “Baseball, motherhood, apple pie and Chevrolet,” evoking a lost era when all those images were icons of American wholesomeness.

Now, as the 21st century zooms onward, football is arguably the defining American sport, Honda and Toyota vie for making the best-selling passenger cars, and motherhood is seen as an impediment to steady career advancement.

And apples are not even an indigenous American fruit.

Plant botanists have traced the genetic trail of apples to origins in Central Asia, from where Silk Road caravans spread the fruit east and west. Hundreds, perhaps thousands, of varieties of apples have been bred out of the complicated genetic stock of those ur-apples. European colonists brought apples to America, where they have been interwoven with American history, as Michael Pollan documents in his book, The Botany of Desire. John Chapman — Johnny Appleseed — was a real person, not a merry sower of seeds, but a hard-working nurseryman and salesman who sold orchard stock throughout the Midwestern frontier.

The two-crust apple pie became iconic of the American heartland by the time Mad Men copywriters were tasked with making Chevys iconic too. But the two-crust high-filled pie has its roots in European single-crust fruit tarts, which remain an easier approach to pie baking.

The French have two characteristic ways of turning apples into a lovely baked dessert. For the classic tarte aux pommes you have to be patient enough to arrange the apple slices attractively, but the end result is visually rewarding, and quite delicious. I like to make this as a way to show off my home-canned applesauce, but commercial applesauce will work just fine as a base.

Pie crusts can be tricky to roll out and to handle. Although I think I can usually master pie dough (and am not too proud to use ready-made grocery store refrigerated crusts when I am too lazy to make from scratch), I was happy to find a no-rolling press-in crust that is easy to manipulate and pleasant to eat. It worked fine for this tart.

The story behind the origin of tarte tatin is, like most origin stories, mostly apocryphal. I like this pie because it can be sort of sloppy, and it requires both a cast iron frying pan and a strong wrist to flip it properly. So if you suffer from carpal-tunnel syndrome, get help in decanting this.

(Originally published in the Winter 2014 issue of Food & Dining)

To make crust, place melted butter, sugar, salt and flour in a bowl and mix well with a large fork to make a dough that’s moist but not sticky. Press together with fingers, and if sticky, add more flour a tablespoon at a time until dough is soft, workable, but not sticky.

Put a 9-inch tart pan with removable bottom on a baking sheet or pizza pan (this will make a removable bottom pan easier to handle). Press the dough into the pan, first pushing it evenly along the sides, and then covering the bottom. Prick bottom of crust several times with tines of a fork. Lightly press a sheet of aluminum foil onto crust, and up against the dough on the sides, fill with pie weights and refrigerate crust in pan for 30 to 60 minutes.

Heat oven to 375 degrees. Place pan with lined and weighted crust in oven and bake 10 minutes. Remove foil and weights, return crust to oven and bake another 5 minutes or so until crust is lightly browned on sides and bottom. Remove and let cool.

When crust is cooled enough to handle, spread a thin layer (less than a half-inch) of applesauce across bottom of crust. Arrange sliced apples in a decorative pattern on top of applesauce, starting along the edge and working around, overlapping apple slices, the then starting new rows as needed, moving into the center. Place tart in oven and bake 30 minutes, or until apples are tender and crust is nicely browned. Remove and let cool.

In a small saucepan melt the jelly over medium-low heat while stirring. When jelly is melted, brush on top of apples, glazing them lightly. Serve at room temperature.

In concept, this is not unlike a pineapple upside-down cake, and therefore a cast iron skillet is the ideal baking tool.

8 or so nice pie apples, peeled, cored and sliced in half
Juice of half a lemon
3/4 cup sugar
4 tablespoons unsalted butter
1 sheet puff pastry dough, defrosted

Cover peeled, cored and halved apples with water in a bowl, and squeeze in juice of a half lemon, and toss in the lemon.

Place 10-inch skillet over a medium-low heat and add sugar. When sugar begins to melt, start stirring until all the sugar is melted and turns a rich golden color. Remove from heat.

Drain apples and discard lemon. Arrange the halved apples cut side up in the pan in a pattern that appeals to you and fits as many in the pan as possible. Cut butter into small pieces and scatter over the apples. Return pan to medium heat and continue to cook until sugar turns a rich brown color, shaking pan slightly now and then, but do not disturb placement of apples.

Roll out the puff pastry dough to an 11-inch circle. Place dough over top of apples, and tuck edges of dough as far down over the apples, between sides of pan and apples, as you can manage. Place pan in oven and bake about 30 minutes, until crust is puffed, browned and crisped. Remove from oven and let cool 10 minutes or so.

Run a small knife around the pan to loosen the crust. Place a serving plate over the skillet, and carefully, using pot holders, flip the pan over so the plate is on the bottom. Carefully remove the pan and readjust position of any applies that stick to the pan. Scrape any caramel still in the pan over the apples. Serve warm, with vanilla ice cream if desired. F&D