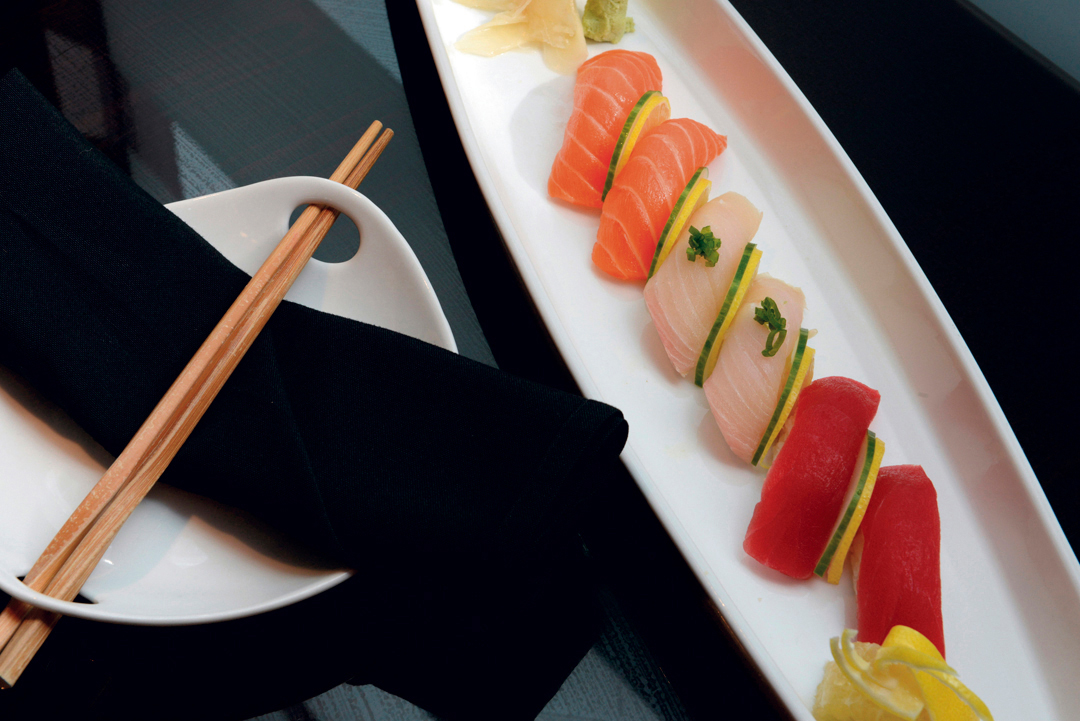 One of the more recent dedicated sushi bars making a name for itself is Arata Sushi on Louisville’s East side in Prospect. Opened in 2011 by Paras and Detak Tiwari, experienced investors with a string of eating properties around town, Arata distinguishes itself with an unwavering focus on quality food prepared by experienced chefs in an upscale, modern setting.

It’s nestled in a strip development along a busy highway so one has to be careful turning in, but once there you enter a setting — put together by local restaurant design maven Dennis Tapp — more typical of cosmopolitan centers like Los Angeles, New York, or South Beach.

In the intimate dining area seating 52, a few large screen T.V.s (thankfully without sound) can comfort sports-fixated clientele, but the overall ambience is relaxed, intimate, and focused on the dining experience.

“Personally, sushi is my favorite food, and I’ve experienced it on five continents,” said Paras “Puru” Tiwari. “We don’t serve fried rice here. My concept was to keep focused and put what we saved in labor and ingredients (from a broader menu) right back into the quality of our food. We serve a special product and a quality of service not often available in Louisville.”

Tiwari, 30, was raised in a family of entrepreneurs which found success building a portfolio of franchise outlets. But 10 years ago, he convinced his father, Depok, to let him branch out into independent eateries, which led to partnerships with Billy Fox for J. Gumbos and Saul Garcia with a Sol Aztecas. Seeing another opportunity, he began developing his concept for Arata in 2010, fueled by personal tastes and the creative wave sushi was experiencing around the world but especially in the United States.

To execute his vision, Tiwari sought out talented chefs, like current lead chef Paul Pel, who has 25-years’ experience, including 20 in Atlanta before coming to Louisville five years ago. When asked about the creative profusion of sushi dishes in America as if it were something new, Pel replied, “It already happened 20 years ago. It’s just new to the Louisville area.

“Sushi has very much evolved from simple to sophisticated,” Pel continued. “Sushi now incorporates everything to meet Americans’ broad taste — fried shrimp, soft shell crab, these are not simple, traditional rolls. So part of the experience is how clever the chef is. One learns from experience and goes with what they believe is good.”
That special quality of the seafood used in sushi also becomes obvious.

“Bluefin tuna is the top. It is better, softer and doesn’t have the muscle and sinew of yellowtail,” Pel said. “We check all our fish for color, texture, freshness. We look at the backing of the blood line — the darker it is the poorer — and at the eyes and gills. Additionally, different handling is required for what is farm raised or wild caught to ensure there is no contamination from parasites.”

In the maki category, Arata serves 36 rolls unique to the restaurant, but all the choices remain consistent with the owner’s philosophy, “What makes sushi is fish,” Tiwari said. “The trick is adding flavor without overpowering it.”

The Volcano roll, a combination of fresh tuna with tempura asparagus inside topped with avocado and baked spicy crab that is then torched for ten to twenty seconds, offers a dense, chewy fish-forward flavor.

The Tokyo roll is a little more complex, combining spicy tuna and cucumber inside with a topping of smoked salmon and unagi (eel) drizzled with spicy mayo, and chile flakes. It satisfies as a balanced taste with smoky overtones.

The Sea Breeze, originally made for a group but now a popular menu item, is “a Hawaiian seafood tartare with two fish ingredients mixed with a variety of fruit,” Pel said.

Lighter rolls with fruit in them are not uncommon at Arata, and might even serve as a dessert offering for those so inclined.

“We serve six rolls with fruit in them — mango, strawberry, kiwi, etc.,” said Tiwari. “We even have one, the Ozeki, with a tempura-battered banana. And for those who shy away from raw fish, we have many cooked fish offerings, like the completely cooked Las Vegas roll, and vegetarian offerings that contain kampyo, a dried, sweetened gourd, tempura-fried vegetables, or pickled radish.”

Arata also offers a broad range of appetizers, soups and salads, traditional house rolls and nigiri and sashimi. There is similarly a broad selection of sake, ten imported and domestic beers, and a remarkable 100 wine offerings from which to select.

“The best part of this business is seeing people take that first bite, push their personal envelope, and then lean back with a look of wonder and satisfaction,” Tiwari said. “We are tucked away and our challenge is to let people know we are here. But I know that once we get them in the door, we’ll be their sushi restaurant of choice.”