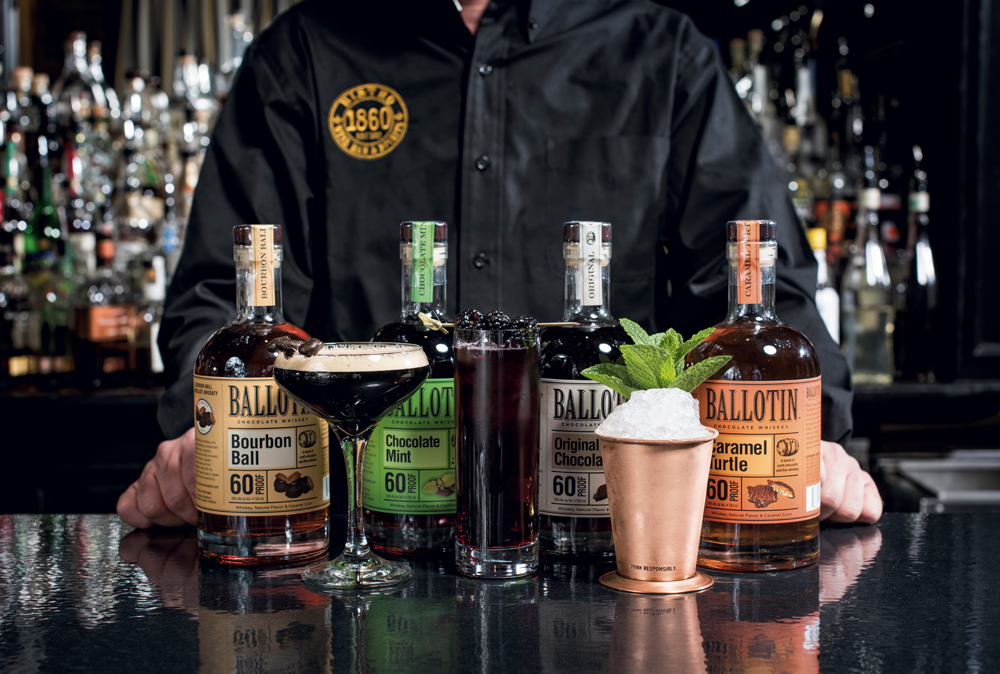 People who know me won’t be surprised by the analogy that came to mind as I sat down to sample Ballotin Chocolate Whiskey, a new product from a veteran of the local distilling industry. What jumped into my head was the rabbit-duck illusion, an ambiguous 19th-century German drawing depicting a rabbit that, if you look again, looks like a duck, or a duck, if you blink, that resembles a rabbit. Which creature is it?

It all depends on one’s perspective, and points of view can be weighty matters, indeed. The eminent philosopher Ludwig Wittgenstein was so enamored of the rabbit-duck illusion that he cited it as an example of the different ways people see the world.

When I set out to sample the four varieties of Ballotin Chocolate Whiskey — Original Chocolate, Bourbon Ball, Chocolate Mint and Caramel Turtle, each at 60 proof — there were elements of rabbits, ducks, adventure and confusion crowding my mind.

Would these libations strike me as whiskey-flavored chocolate, or chocolate-flavored whiskey?

The tumblers were allowed to speak. Sipped neat, these four expressions of Ballotin Chocolate Whiskey struck me as impeccably balanced, tasting exactly as billed and, most significantly, with the character of the whiskey fully in evidence.
So much for the rabbit-duck illusion.

A marriage of equals

Meet Paul Tuell, the founder of Ballotin Chocolate Whiskey. He always begins with the whiskey.

“We use Light Whiskey made with a traditional Bourbon mash; 51% or more of corn, with wheat and barley making up the rest. It has all the flavor range of more traditional ‘Bourbon,’ but without the depth of oak and char that Bourbon’s new and charred barrels impart on Bourbon.”

Tuell is a passionate and articulate former Brown-Forman brand manager, eager to tell the story of how his whiskey came into being.

He is not a distiller. Rather, in fashioning Ballotin’s expressions, Tuell acts in the capacity of a rectifier, purchasing stocks of Light Whiskey from established distilleries, then blending and adding his chosen flavorings. At present, this process takes place at Challenge Bottling, an offshoot of Flavorman, Inc., a Louisville company.

When misconceptions arise, Tuell corrects them, striving to be a fair broker of information. For instance, as Bourbon is legally defined, it cannot be flavored.

“We are very careful not to blur this distinction,” Tuell says. “People err in referring to us as ‘flavored Bourbon,’ and I always correct them. We are a flavored whiskey. Having said that, we are 100% whiskey. No grain neutral spirits or other ‘filler’ spirits are added.”

Ballotin Chocolate Whiskey’s flavors derive from the most logical source, the essence of the base spirit itself.

“My flavored whiskeys are conceived of the flavors that naturally, organically and somewhat magically occur in fine whiskeys — caramel, nuts, vanilla, mint and, yes, chocolate,” emphasizes Tuell.
“I will never support Froot Loops whiskey; but bringing those lovely, subtle flavors to the fore feels fine and right.”

When it came to establishing the four distinct expressions of Ballotin Chocolate Whiskey, Tuell did not rely on his artistic sensibility alone. Rather, he sought to quantify it.

“With our flavored whiskeys, we have stayed within the relative confines of the whiskey Flavor Wheel,” he explains. “It is an articulation of all the complex, nuanced, lovely, and far-ranging flavors that naturally occur in the Bourbon and whiskey-making process.”

The Flavor Wheel referenced by Tuell is a soon-to-be-patented aid for whiskey understanding developed by Woodford Reserve, invaluable for novice and veteran alike.

There are five main components, varying in intensity and emphasis according to a whiskey’s design and individuality, and including numerous potential sub-categories (partial examples in parentheses):

Amid these combinations and many more, there are spaces and shadings. As in music, sometimes the stress is on the note one doesn’t play. Possibilities are infinite, although for the moment, Tuell is content to stop at four expressions of Ballotin, which suit his muse.

“We think the Ballotin drinking occasion mirrors any occasion in which a consumer would enjoy a nice Bourbon cocktail, a glass of wine, a craft beer, or a flute of champagne.”

The possibilities of flavor, presentation and combinations

Puritans always find modernism challenging, and these days, so must purists.

Store shelves sag beneath the weight of flavored alcoholic beverages, and in the realm of whiskey alone, there are variations adding smoked maple, chipotle peppers, peaches, hops and sarsaparilla root.

Why not? Craft beer has grown exponentially by being unafraid to shatter boundaries and to push flavors and presentations previously rejected. With Ballotin Chocolate Whiskey, Tuell offers similarly well-considered flavor choices to a market eager for options and unencumbered by fuddy-duddy.

I completed my examination by reconnecting with my friend Stephen Dennison, whose description of his own line of work is typically nonchalant: “I’m a bartender or a mixologist, whichever we’re calling ourselves now.”

From his station at the back bar of Louisville’s estimable Bistro 1860, Dennison personally crafted three cocktails using Ballotin that showcase the line’s versatility; one with a spirit (Bourbon), one with wine and the other with beer.

“These could be served at a composed dinner,” he observes. “The Bourbon cocktail serves well as a apéritif, while the wine cocktail pairs well with the salad and seafood courses. The beer cocktail accompanies beef, game meats and dessert, and serves as a nice digestif.”

In a thin Collins glass filled with ice, add
all ingredients and top with soda. Stir and
garnish with berries. 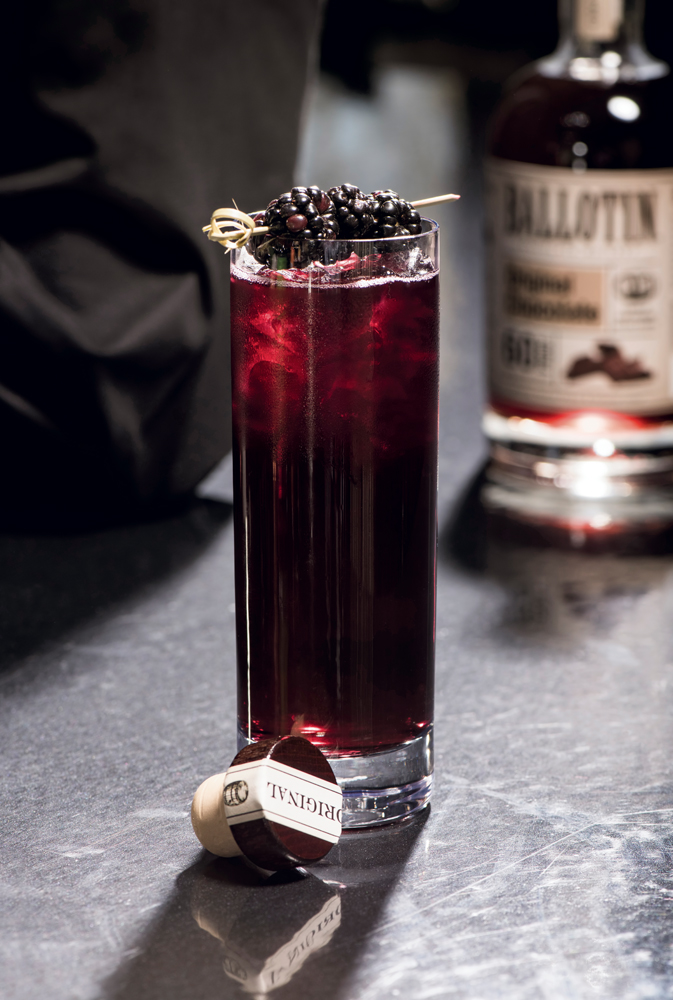 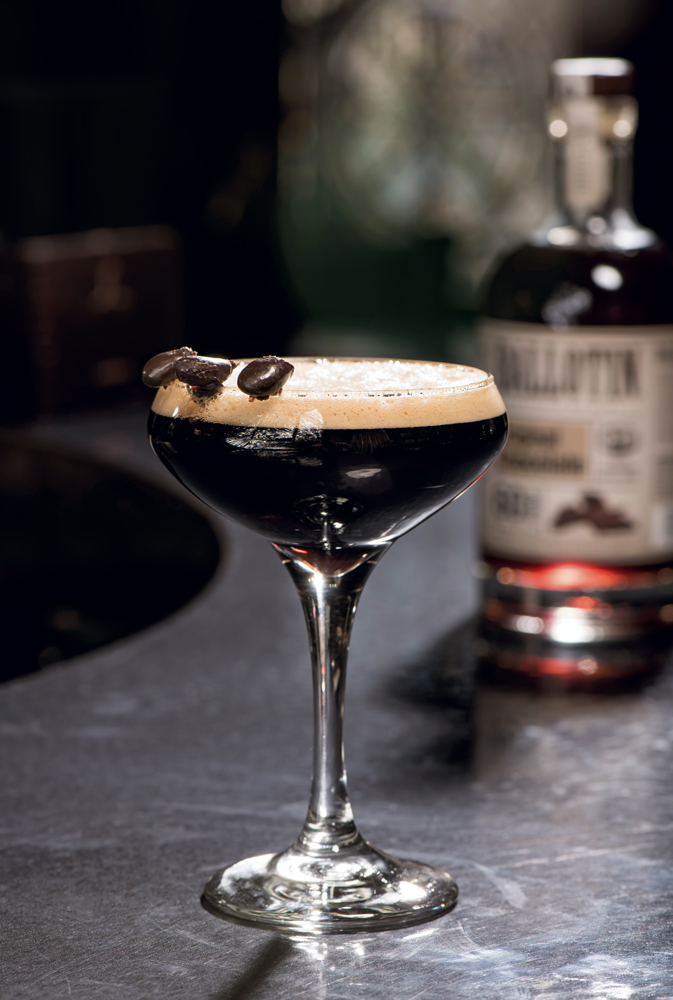 Add crushed ice to a Julep cup or Highball glass, forming a snow-cone styled top. Pick
the mint from the stem and muddle, just until bruised. In a shaker with ice add muddled mint, Ballotin and Woodford Reserve. Shake briefly. Slowly pour down the side of the glass. Garnish with the mint sprigs. 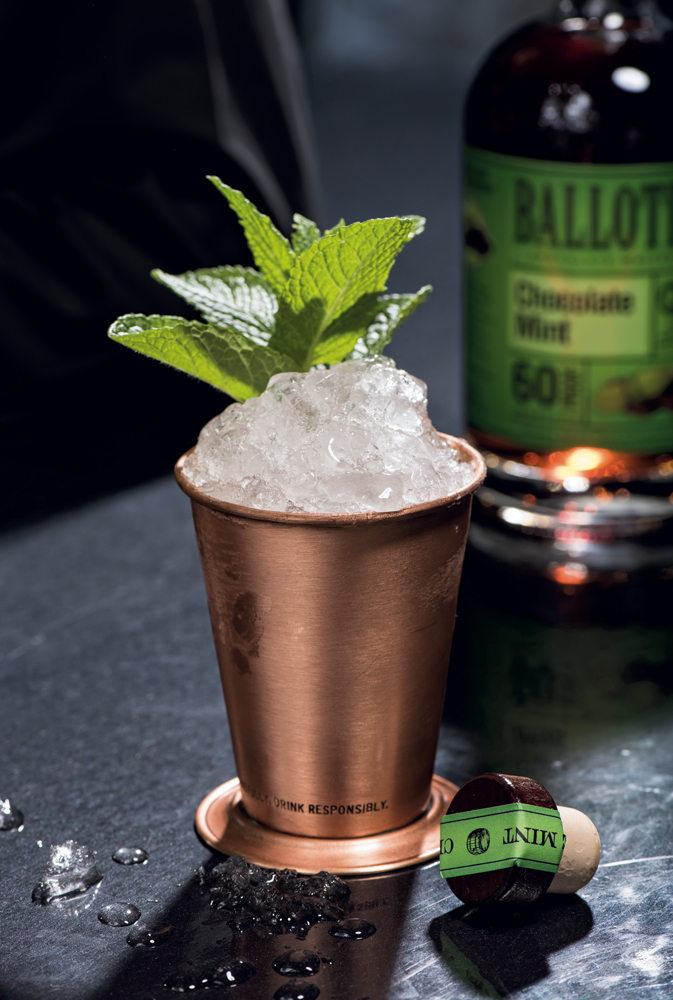 IUS presents “Bourbon — An Introduction for the Inquisitive Drinker,” with Susan Reigler