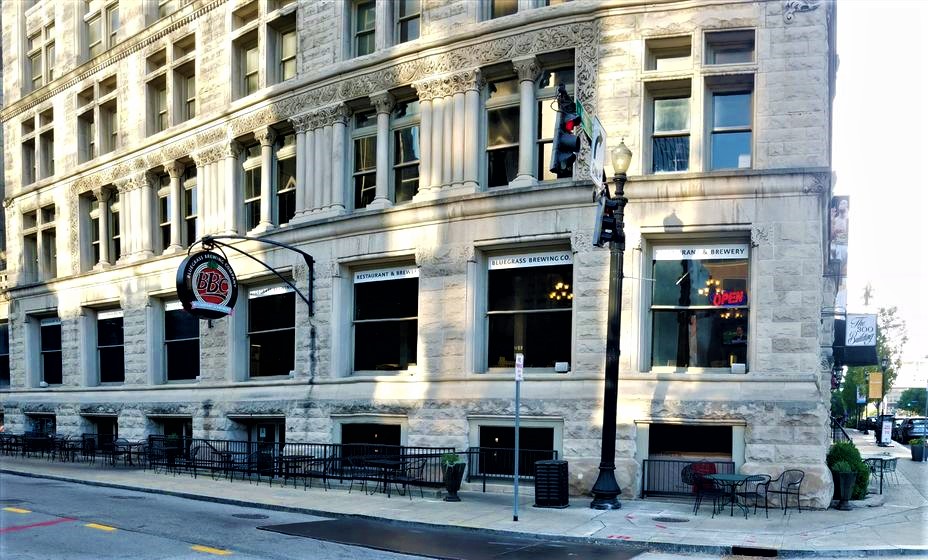 We're back!!! Stop by and say hi! We've worked really hard to give you a safe social distancing environment. We are looking to forward to seeing you! We have a $3 beer special running now to welcome you back.🍻

The Four Roses Bourbon Barrel Loft upstairs has resumed operations, too: “After a few months of taking a break from booking private events in the loft, we are now open and ready to start booking again. If you are looking for an upscale, unique space for a tiny wedding, rehearsal dinner, celebration of life, shower or birthday party, we have you covered!”

Way back in 2010, BBC’s 3rd Street location was just coming into being as the KFC Yum! Center prepared for liftoff just across the street. Food & Dining Magazine looked at the local food and drink scene nearby. Here’s a snippet.

In 1993, Bluegrass Brewing Company became the second Louisville brewpub of our contemporary era, following just a year after the now defunct Silo Brewery broke ground. Back then, the first task facing BBC’s owners, the Hagan family, was to renovate an existing restaurant building in St. Matthews to serve as BBC’s primary brewing and dining facility.

For the new Arena BBC (300 W. Main), directly south of the KFC Yum! Center, the ever industrious Hagans took on their most labor-intensive start-up project to date, and in a truly venerable structure. Dining, drinking and brewing space to the tune of $1.4 million now occupies the basement and first floor of the seven-story Louisville Orchestra Building, formerly known as the Kentucky National Bank, a splendid 120-year-old example of Richardsonian Romanesque architecture that is listed on the National Register of Historic Places.

It has been a tumultuous four years for BBC. The original, iconic Shelbyville Road brewpub ceased operations in January, 2017, and BBC’s 4th Street location (founded in 2006 at the former Theater Square) returned in April, 2018 after a three-year hibernation for construction of its new home, the Kindred Healthcare Building. However, note that the 4th Street BBC remains temporarily closed.