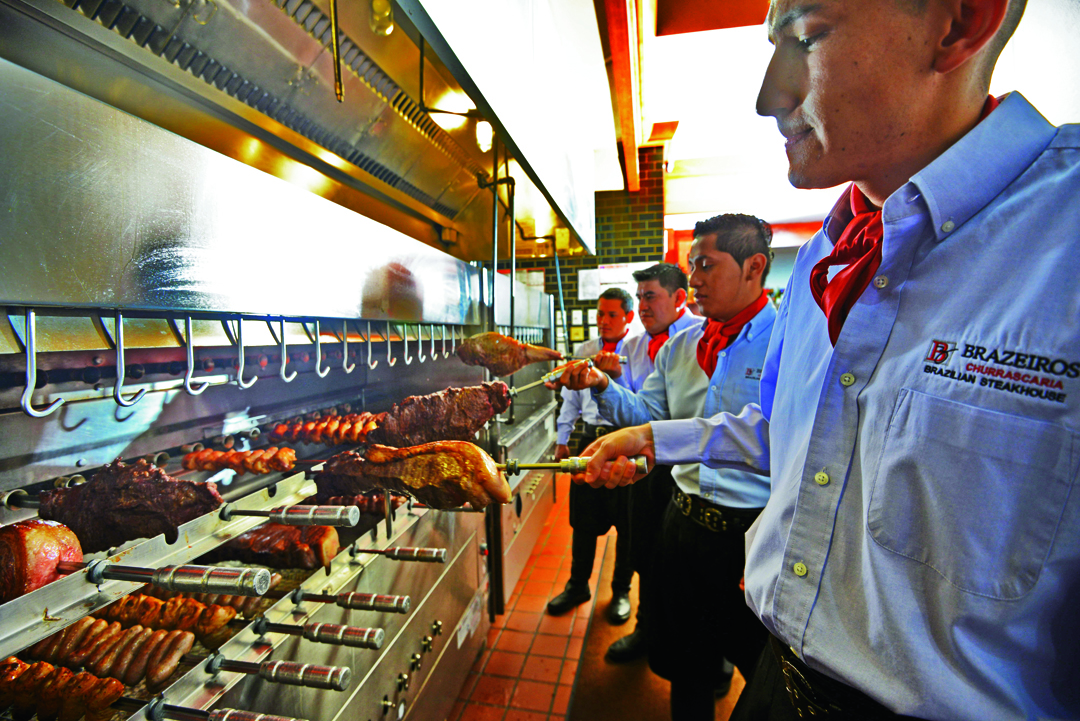 The opening of Brazeiros, a traditional Brazilian churrascaria–or steakhouse–in the heart of downtown’s 4th Street Live is auspicious as Brazil expands its international profile with World Cup soccer and the 2016 Olympics. Taking over the space at 250 S. Fourth vacated by Quattro, Brazeiros brings to Louisville a unique dining experience from a country and culture that has a lot to offer.

Brazil, like America, is a geographically huge country which melds a diversity of cultures—Amerindian, European, African, even Middle Eastern and Asian, influences—into a culinary kaleidoscope. All are in rich display at Brazieros with its relaxed but elegant décor. 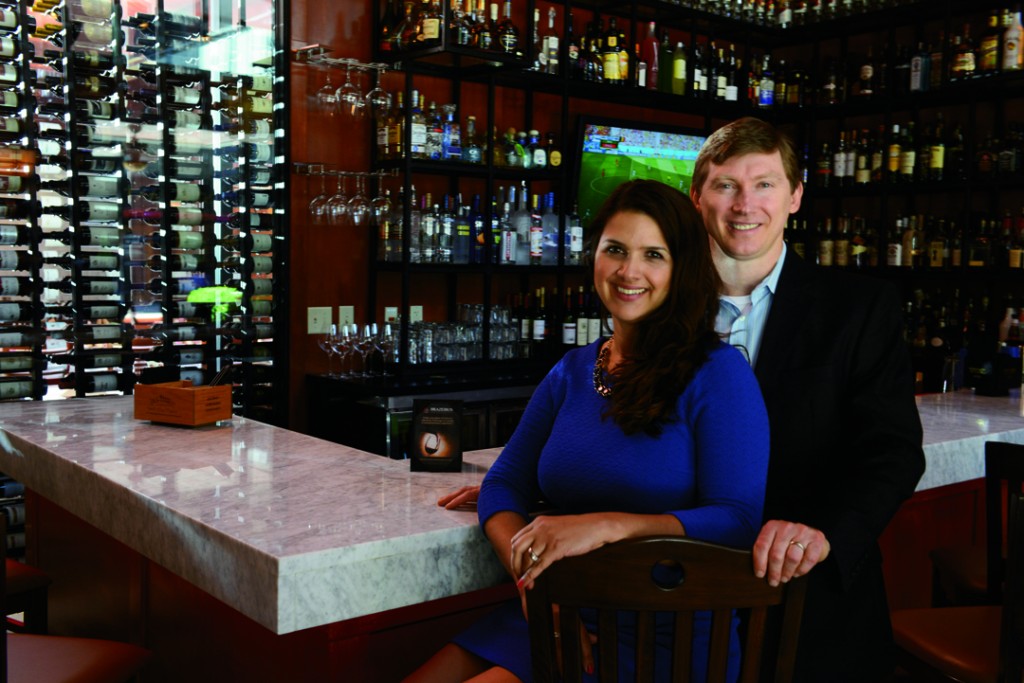 The restaurant is the creation of VilmarZenzen and Renata Lopes-Zenzen, two Brazilian natives who worked extensively in the food and hospitality industry before opening in 2010 the first Brazeiros in Knoxville, Tn. When exploring new opportunities, Renata and Vilmar (who goes by his nickname “Zenzen”) discovered a welcoming environment in Louisville.

“We were impressed with the variety of cuisines here, both national and international, and that people enjoy eating out,” Renata Lopes-Zenzen said. “City officials were very helpful. Even the mayor met with us and was delighted this would be the first Brazilian steakhouse in the state of Kentucky.”

Vilmar is native of Rio Grande do Sul, Brazil’s southernmost state bordering Uruguay and Argentina and the center of gaucho culture in Brazil. Gauchos, the cowboys of the pampas, immense grass prairies in that region, invented the churrasco-style which involved burning range wood to embers over which they then would slow roast cuts of beef on skewers. 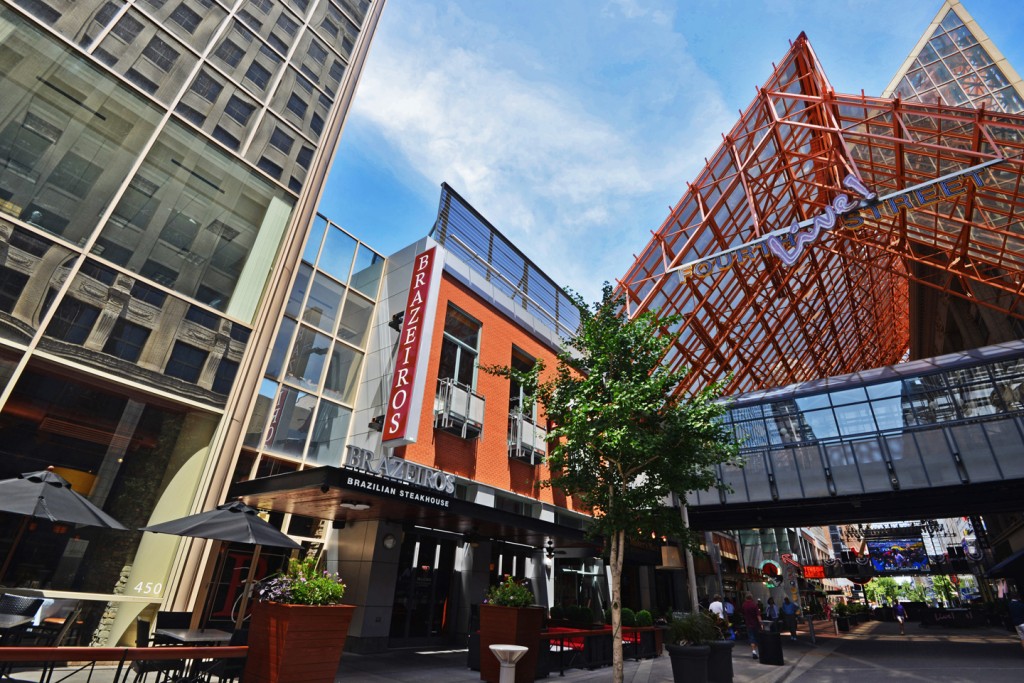 While the chief attraction of a churrascaria is pit-roasted meat, and a lot of it, its modern iteration comes with an impressive variety of vegetables, fresh greens and traditional side dishes, or salgadinhos. If you approach it as an “all-you-can-eat” meat buffet, you might be technically right but will miss the heart of the experience, which is to slow down, balance your choices, and savor your leisure, your company and the abundance of options.

To facilitate this approach, both lunch and dinner at Brazeiros is a fixed price. Each diner is also given a disk, green on one side and red the other, to signal the roving gaucho servers. Flip the green side up to request service, and the red to show you are just fine with what you have. The fixed price gives access to absolutely everything available — called rodizio style in Brazil, meaning “dining in the round,” a style that assures the maximum freedom of choice. 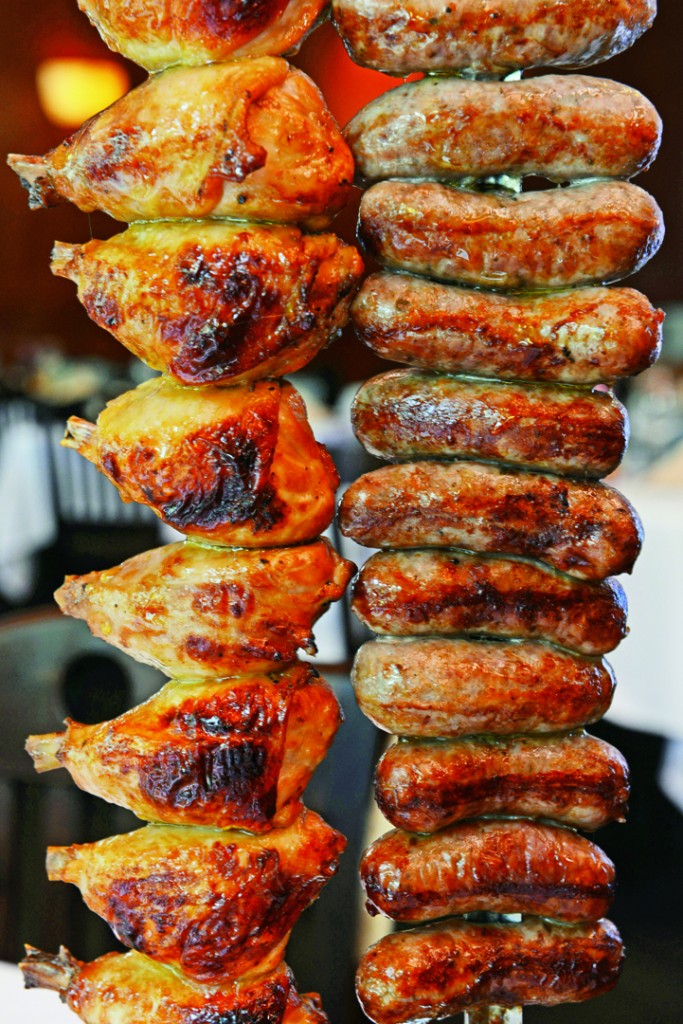 “It is perfect for when friends or family get together. Each person can build the plate they want. Instead of having to order one entrée, one can sample everything there is to offer,” Zenzen said.

“Often people will come in and will grow big eyes at the quality and variety of the salad bar (and fill their plates),” Zenzen continued about the display of greens, cheeses, pastas, smoked salmon, cured meat, hearts of palm, fresh asparagus, and artichoke hearts. “Go easy. Pace yourself. You can always go back.”

The modern surroundings and the style of service are important elements of the experience. In dramatic fashion, roving servers, dressed gaucho-style in traditional, chap-like baggy pants, colorful shirts and bandanas, carry large skewers of the various roast meats. One gets to see the offerings (and smell their aromas) up close, ask questions, and then have their preferences carved table side.

Cued by a green disc, the roving servers will bring spits of meat and family-style side dishes whenever, and as often as, requested. Only when everyone’s card shows red and the check requested is the meal considered complete.

Subtle tastes distinguish the various cuts of beef, custom butchered for the distinctive cooking process. Being adventurous helps and will result in a tour of flavor profiles otherwise not available in one sitting. 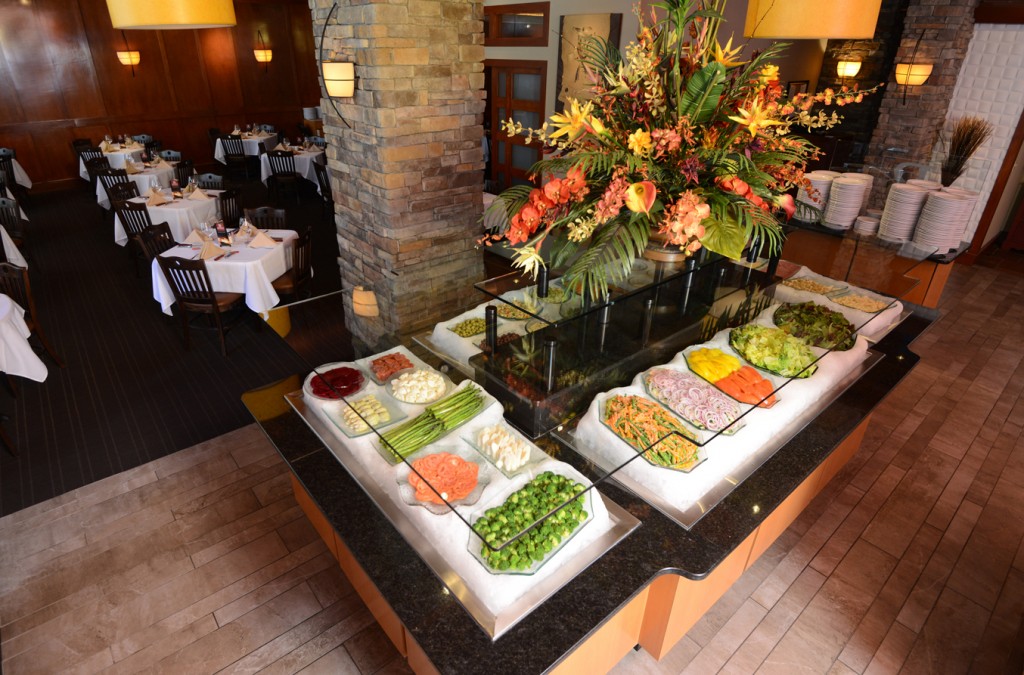 There is prime sirloin beef (picanha) with and without garlic, bacon-wrapped filet mignon, top sirloin (alcatra), bottom sirloin (faidinha), and beef short ribs (costela de boi). You can try lamb (cordeiro) either sliced off a full leg roast or in chops. Pork is available either in chops (costella de porco) or robust sausages (linguica). And chicken comes as bacon-wrapped chicken breasts or marinated legs (frango).

Sides include traditional Brazilian rice and black beans, a crispy polenta dusted with parmesan, caramelized plantains, and a chewy cheese bread (pao de queijo), as well as garlic mashed potatoes and any of the accompaniments from the extensive salad bar.

There is full bar service offering traditional cocktails but consider starting with a caipirinha, the traditional Brazilian drink made from cachasa, a clear, distilled sugar cane spirit. Brazeiros serves the traditional lime version, as well as a strawberry version or a tropical one with strawberry, orange, pineapple and passion fruit. 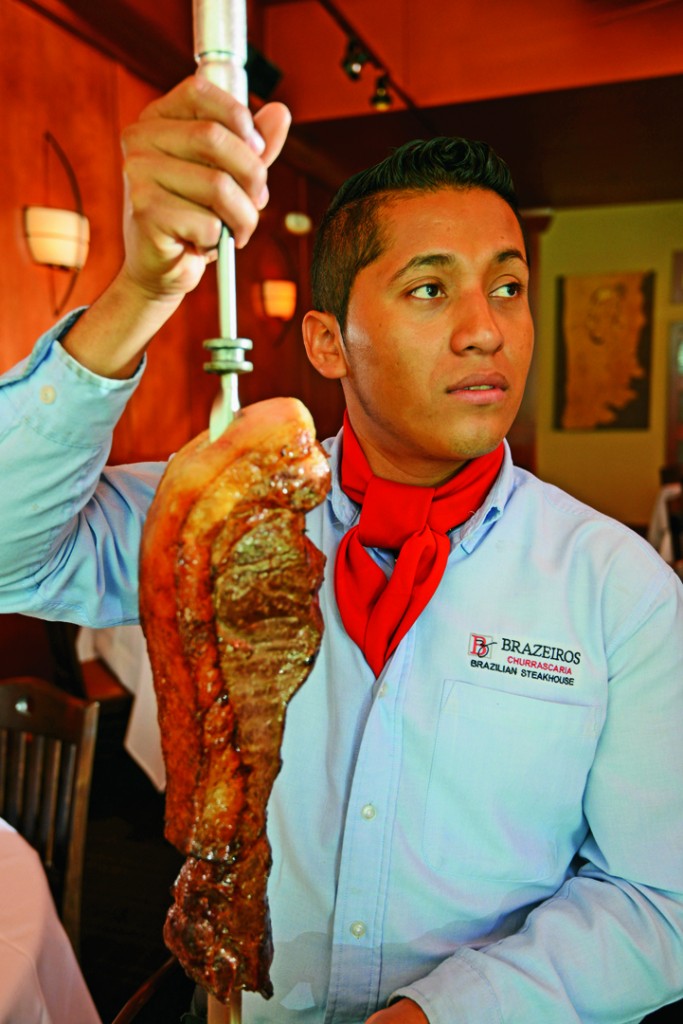 An extensive international wine list, focusing on both familiar and up-and-coming reds from around the world, is available, but Brazeiros features excellent regional wines from South America including Malbecs and Cabernet Sauvignons. The deep red, full-bodied Chilean Carmeneres are worth noting.

“Rio Grande do Sul is considered the best wine growing region in Brazil, but it is relatively small and the best is not available for export,” Vilmar Lopes-Zenzen said. “But we have made an effort to represent the best to accompany our food, including American choices from Napa Valley, Sonoma, and both Washington State and Oregon wineries.”

It’s hard to imagine this much culinary adventure for a tab of $19.50 for just the endless salad bar, or $36.50 for a full dinner. Lunch is priced at $24.50 (or $19.50 for the Lite Lunch option) or $16.50 for just the salad bar. Brazeiros is planting roots in Louisville and offers the churrascaria experience at a fraction of the cost in larger American cities. Compared to airfare and World Cup seats, it’s a bargain.