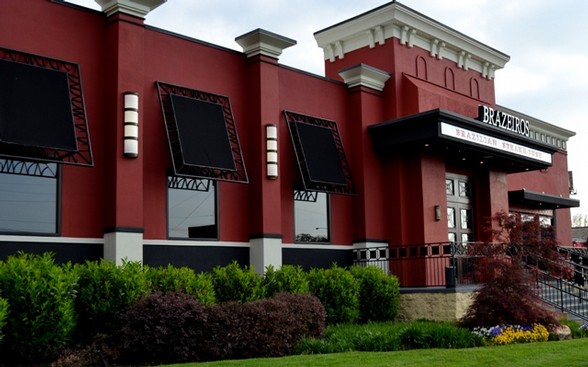 Brazeiros Churrascaria, the Brazilian grill house restaurant, has opened in Fourth Street Live.  It is serving its dramatic and entertaining style of wood-grilled meats, served on long skewers and sliced at the table by strolling “gaucho chefs” during its training weeks.  The grand Opening is scheduled tentatively for March 31st.

The high concept restaurant asks patrons to serve themselves at a large salad bar, and then settle in their seats to be entertained and fed.   All patrons get a red and a green serving marker, the green alerting the gaucho chefs to bring around their meat selections–several different cuts of beef, leg of lamb, chops and sausage–to slice off on diners’ plates.  When the pile is big enough, flip up the red marker to stop the onslaught and dig in.  Want seconds?  Show the green and be prepared.  Family style side dishes will also be offered at each table.

Fun desserts will be offered too: papaya cream,  Brazilian flan; and chocolate eruption cake.  This is bound to be a  favorite of conventioneers, so stop in during the soft opening before word gets around.