The philosopher cautions us to define our terms, these being gleaned from a helpful information release calculated to provide just the facts, ma’am, and reduce the digital editor’s workload.

That’s because he’d rather be drinking beer.

Louisville Beer Week is being presented by Louisville Ale Trail.

Louisville Ale Trail serves to engage with Louisville tourists and residents about our local beer scene by encouraging city-wide tourism through the promotion of participating member brewery taprooms.

Louisville Beer Week 2020, presented by the newly-established Louisville Ale Trail, will recognize the resilience of brewery owners and employees during COVID-19 with brewery collaborations and the launch of the new Louisville Ale Trail Passport during the week of October 23 – October 30.

Louisville Beer Week’s theme this year is “resilience.” Despite statewide and citywide shutdown requirements due to COVID-19 and curfews, and subsequent financial burdens, throughout 2020, brewery owners and employees were able to pivot to package sales, patio seating, and curbside pickup. Despite all uncertainties, the local beer scene has also managed to grow – with the addition of multiple new breweries opening since March.

“Nobody planned on opening their taproom during a global pandemic,” said Roger Huff, co-founder of Gallant Fox Brewing. “But it’s not like we could just give up on our plans. We were able to pivot and make it work under new conditions. The other few breweries that opened after us probably thought the same. Why give up – why wait?” 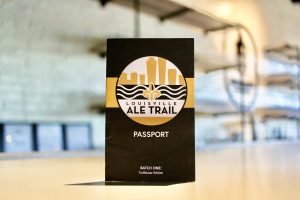 “This was one way to encourage beer-tourism within our own city when many people just aren’t traveling right now,” said Louisville Ale Trail organizers. “Thumb through an Ale Trail passport and we guarantee that you might get thirsty and find somewhere either new or somewhere you haven’t been in a while.”

The pilot launch for Passport booklets can be purchased online at www.louisvillealetrail.com beginning October 23 through the end of the year while supplies last. For news and updates for Louisville Beer Week, follow @louisvillebeerweek or @louisvillealetrail.

Atrium Brewing + Against the Grain Brewery:

“The Trunchbull” – Salted Caramel Porter (6.8%). Layered with caramel and chocolate malts in the mash. Salted caramel powder from sugar and spice donut shop was added to the boil along with copious amounts of Himalayan sea salt, lactose, and caramel. The Trunchbull loves her sweets. She’s salty and mean. She’s a tyrannical monster who frightens the life out of children. The Trunchbull is very superstitious and has an intense fear of ghosts, black cats, and the supernatural in general. Enjoy with caution. The Trunchbull is ruthless.

“Mango Madness” – When Greg and Sarah from LAGERS won the homebrew competition and brewed with us in Frankfort, we dove deep into our ties with fruit…We know wood, wood is good yes? Then we dove deeper, they were basically doing everything. What is this beer? Mango’s grow on trees, right? Trees are wood, wood is good, Goodwood. Aha! It’s madness! Absolute Mango Madness! Hazy IPA with Citra, Centennial, and Mango Puree. A tropical Vacation of a 7.5% beer that we’re crazy about. Available in both Louisville and Frankfort pubs on 10/23.

Taste of Derby returns to the KFC Yum! Center on Thursday 5 May