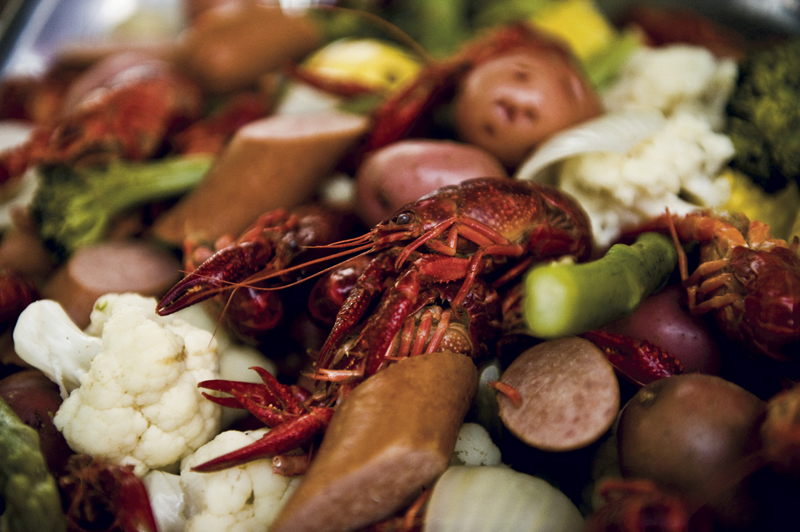 Up here, north of Bayou Country, Cajun food is party food, the mark of a celebration that includes spicy sausage and seafood, rice and okra, catfish, gumbo, maque choux…

And the epitome of Cajun party food is the crawfish boil.

Interestingly, crawfish boils resemble the traditional New England lobster dinner. French settlers of the Canadian Maritime Provinces (known as Acadians), assimilated many culinary elements of the Northeast into their own cuisine before moving south to flee British hegemony over Canada in the 1700s.

Joining earlier French settlers in Louisiana, the Acadians soon Anglicized their regional name to Cajun, established themselves as a working class in the bayous of the Mississippi Delta, and settled down to develop their unique culture, patois and cuisine.

Of the indigenous Louisiana foods they quickly adopted, the crawfish (or crayfish, or mudbug) is among the most loved. One charming legend has it that after the Acadians’ expulsion from the Maritime Provinces, the lobsters of the North Atlantic so longed for them that they set off to find them. The effort so taxed the lobsters that the stress of the long journey left them permanently miniaturized — though bearing a new earthy flavor.

In Louisville, 5-pound bags of cooked, frozen crawfish can be found at Highland Fishmarket in Middletown. Live crawfish can also be ordered online from a variety of companies, most of which are based out of Louisiana and require overnight delivery. Before cooking live crawfish, they should be cleaned (purged) in a solution of salt water (see Purging Crawfish).

A real crawfish boil is no tea party with lifted pinkies and proper linen; it’s a working man’s celebration. Instead of using china and crystal, pour the steaming hot shellfish right onto a paper-covered table for hands-on disassembly. Don’t know the routine? Find a generous and hospitable Cajun who will be happy to show you how to break open that little shell, pull out its tail meat and then suck out the sweet and fatty morsels remaining in the head. Yes, the head.

Dig in, all, and pass those paper towels. After all, this is a party.

In a very large stockpot, add 4 gallons water, crab boil, salt, cayenne, squeeze of lemons and lemon rinds. Cover the pot, turn on high heat and bring to a boil. Let boil for 5 minutes to season then add the cauliflower, broccoli, asparagus, potatoes, onions, garlic, sausage and corn. Boil for 5 minutes until just cooked then add the crawfish. Boil for another 5 minutes until the crawfish are hot and turn off the burner. Cover and let soak for 10 minutes.

Remove everything from the pot using a slotted spoon or pour into a large strainer to remove the liquid.

To serve the traditional way, cover a table with thick layers of newspaper and pour the contents of your boil onto the table. Enjoy with crusty bread.

In a large pot, add 2 gallons (32 cups) of water. Add the dry and liquid crab boil, Worcestershire sauce, onion, garlic, salt, cayenne pepper and hot sauce. Squeeze the lemon into the pot then add the rinds. Bring to boil and simmer for 15 minutes. Add the shrimp bring back to a boil, simmer for 3 minutes until pink. Turn off the heat and allow shrimp to sit for 10 minutes to season. The shrimp should be tender, pink and not over-cooked. Serve with cocktail sauce.

To cool down your shrimp or crawfish boil enjoy this refreshing cocktail which has a little kick of its own!

Combine all ingredients in a mason jar with ice, shake and enjoy!

In a mixer with a wire whisk attachment, combine the cream, powdered sugar and bourbon. Whip on low for 30 seconds to incorporate, then on high for 3 – 4 minutes until stiff peaks form. Be careful not to over-whip. Dollop on top of your favorite pie or cobbler.

If you decide you want to go totally authentic and order your crawfish alive and kicking, you will need to purge your crawfish before you boil them. Here’s how: Place live crawfish into a large tub or ice chest, pour a 26-ounce box salt over top, and add enough water to just cover crawfish. With a large paddle, stir gently 3 minutes to blend salt and water, then pour off brine and rinse crawfish with clean water.
Don’t over-purge. Doing so risks killing them before cooking. Dead crawfish will float to the top, so be sure to discard them. Also be sure to keep your crawfish cold until it’s time to cook them.