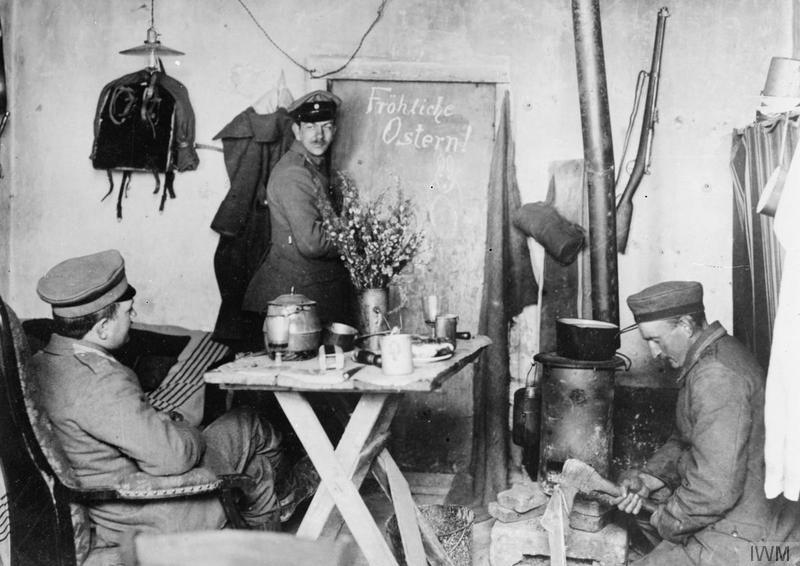 The coranavirus pandemic has ensured this won’t be an ordinary Easter weekend. Then again, it isn’t the first time that circumstances have interrupted tradition. Through the ages people have made do with what they could during trying times, as in this account of an Easter truce on the eastern front during World War I.

Artillery duels between the Austrian and Russian armies started, sometimes by day, but more frequently during darkness.

Then suddenly on Easter Sunday, about 5 o’clock in the morning, about twenty Russians came out of their trenches, waving white flags, carrying no weapons, but baskets and bottles. One of them came quite near and one of our soldiers went out to meet him and asked what he wanted. He asked whether we would not agree to stop the war for a day or two and, in view of Easter, meet between the lines and have a meal together. We told him that first we would have to ask the military authorities whether such a meeting would be possible. The Divisional Commander refused permission.

Nevertheless at 12 noon the Russians came out of their trenches and brought with them their military band, who came playing at full strength, and they brought baskets of food and bottle of wine and vodka, and we came out too and had a meal with them. We also had food and wine to offer.

During the meeting both sides seemed to be embarrassed, but both sides were polite to each other and consumed the food and drinks we offered to each other. After a few hours we all went quietly back to our trenches.

Louisville area eateries currently are restricted to curbside carryout and delivery (our list is here), and our local and regional purveyors of food and drink have been adaptive and resourceful in coping with state-mandated alterations to their usual routine.

Some of them are offering meals to go on Easter Sunday. Following are three good sources of information.

LOUISVILLE: Looking for an Easter meal? These restaurants in Louisville are serving up something special (Gege Reed; Louisville Courier Journal)

LOUISVILLE: Where to get your Easter meal (at Louisville Family Fun)