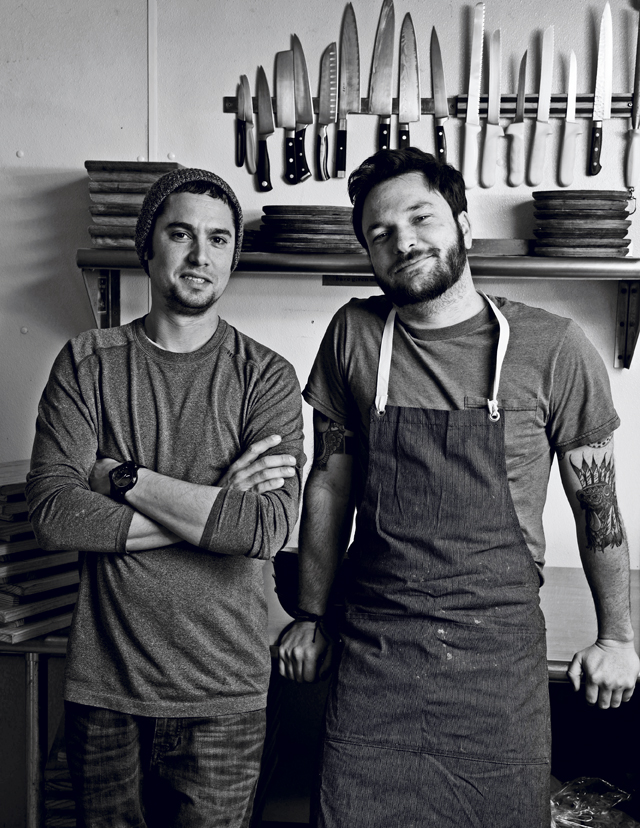 You two met at Sullivan University. How has that program impacted your cooking career?

Mucerino: Jayson Llewellyn was a bigger influence as far as becoming better chefs. We can look back on it and appreciate that time. He was a real hard-ass on us.

AB: I’ve got hunters in my family. I remember eating fresh venison, fresh pheasant, just a lot of wild game.

Did those memories play a part in your decision to open the restaurant Game?

CM : Hammerheads was open mainly as a barbecue restaurant and we were selling so many wild game burgers that we thought it would be cool to have a whole restaurant revolved around that.

AB : That’s a good point. I just remember wanting to test the waters again and see if we had what it took because Hammerheads was killing it.

What inspired the two of you to become business partners in the first place?

AB : I heard there was this place in German-town that was going out of business and the owner was selling all of her commercial equipment. I went down there to buy equipment for my house and it seemed like a cool, little spot. Chase was the only responsible friend I had, so I figured he’d make a good partner.

CM : It was a little rundown spot that we were actually able to afford without taking out loans or anything.

Was it hard making that transition from friends to business partners?

AB : There are always going to be bumps, but for the most part it has been pretty smooth. People on the outside have always recognized us as an ideal partnership. We complement each other.

CM : We had always worked together and cooked together. We both also had longtime girlfriends that were servers at the time and they helped us out a lot. Basically, both of our lives always revolved around the business, which made things easier.

Did you bring along a lot of people you already knew to work at Hammerheads?

AB : All we had were our friends working there in the beginning.

CM : We grew up in the restaurant business together. We know everybody everywhere, it seems.

Were there different challenges opening Game than you had with Hammerheads?

AB : Game went really smooth because we’d learned so much with Hammerheads.

CM : Both restaurants are a small size which helps keep everything manageable.

How did you separate the cooking responsibilities?

CM : We did everything ourselves when we first opened. We’d do all the prep and we did all the cooking in the kitchen at night.

AB : It was definitely a novel experience, going from just being a chef to a restaurant owner. There was a lot more involved than we first realized. Eventually, we hired some good people to help us keep things going.

Migo opened in October 2015. Why did you feel you needed another restaurant on your plate?

AB : To tell you the truth, we kind of get bored. I’ve always got all types of ideas that I’d like to crack open.

CM : With the closing of Loop 22, we still had possession of the building. We already had an investment in this location, we didn’t want to just back away.

What was your involvement in Loop 22?

AB : It was mostly our friend Eric Morris. We were trying to be silent partners, but we were more involved than we had signed up for.

CM : Basically, he had a concept that we liked and it didn’t work out. He backed out and we moved forward.

How does opening Migo impact Game and Hammerheads?

AB : We are lucky enough to have people running the other restaurants well so they are like on auto-pilot. For the most part those guys kill it.

CM : We don’t have much employee turn-over. That is why we turned our attention to something new.

So you guys are both cooking at Migo?

AB : We cook here every day.

How many hours do you guys work a week?

AB : We recently got another day off, but even then there is a lot of running around when you’re not in the kitchen.

How will it stand out from other Latin-themed restaurants?

AB : The food is more fusion. We are adding Korean, Hawaiian, and Italian influences with the Latin flavors.

CM : The fusion and the proteins we pick are a big difference. We had a taco with risotto in it recently. We feel free to play around.

Migo is different from your other restaurants because you have a third partner?

AB : Yes, his name is Gerald Dickerson. He’s another buddy we met through the grapevine.

CM: He worked Seviche for the last 10 years or so. Migo is the only restaurant we have with a full bar and liquor. He excels in bartending and as a bar manager, so that is something we don’t have to worry about.

You have three successful restaurants in one city. Why is Louisville such a good restaurant town?

AB : The scene is still kind of new. It doesn’t have that firm foundation like Chicago or New York City. It was a little untapped gem about eight years ago.

CM : It also helps that the diners are adventurous. People are always willing to try new things.

What is your key to success?

AB : Consistency. You’ve got to keep everything above board, from the menu to the food. It’s difficult to maintain when you’re spread out between three restaurants.

CM : You’ve really got to trust your kitchen guys.

Do you two have any farmer’s markets you like to shop for ingredients?

AB : I nerd out on farmer’s markets. We actually have one at Douglas Loop every Saturday. We’ve also developed relationships with a handful of local farmers. Fred and Noble Holden from Holden Farm and Carol Freeman, to name a few. We get mostly tomatoes, garlic, sorted greens and root vegetables.

CM : That’s where a lot of our specials come from. We use whatever is in season.

Do you frequent any ethnic restaurant markets?

AB : La Tropicana off Preston Highway. We go there for ingredients, but we get a lot of influences and ideas there too.

CM : There is also a good Asian market
just down the street from it: Viet Hoa Food Market.

When was the last time one of you was scared in the kitchen?

CM : One time we were working at the Marriott and we set off the sprinkler system. The whole second floor was flooded.

AB : It flooded Second Street. It took over two hours for all the pipes to drain.

Where are some of the places you like to eat besides your own restaurant?

AB : I’m basically vegetarian, so I hit a lot of the ethnic restaurants around town. Heart and Soy is one I hit weekly. Queen of Sheba is another.

CM : I like Gralehaus and Lydia House over in Germantown. I’ve gotten some real solid food at those places.

Is there an ingredient you use a lot that would surprise people?

CM : People are surprised at what you can do with tongue.

Do you guys plan all the menus or do other people have input?

AB : We kind of pave the way and the other cooks just kind of keep it clean.

CM : We’ve had to change the menu a couple of times because of something we couldn’t get, especially with Game. That’s happened several times with kangaroo.

Do you guys have any plans for more restaurants in the future?

AB : I’d like to say no but I’m always coming up with new concepts. But there is nothing in the near future.

CM : We’ve talked about opening another Hammerheads. We’ve been out to Colo-rado looking at property. Nothing has worked out yet, but we’re always considering our options.  F&D