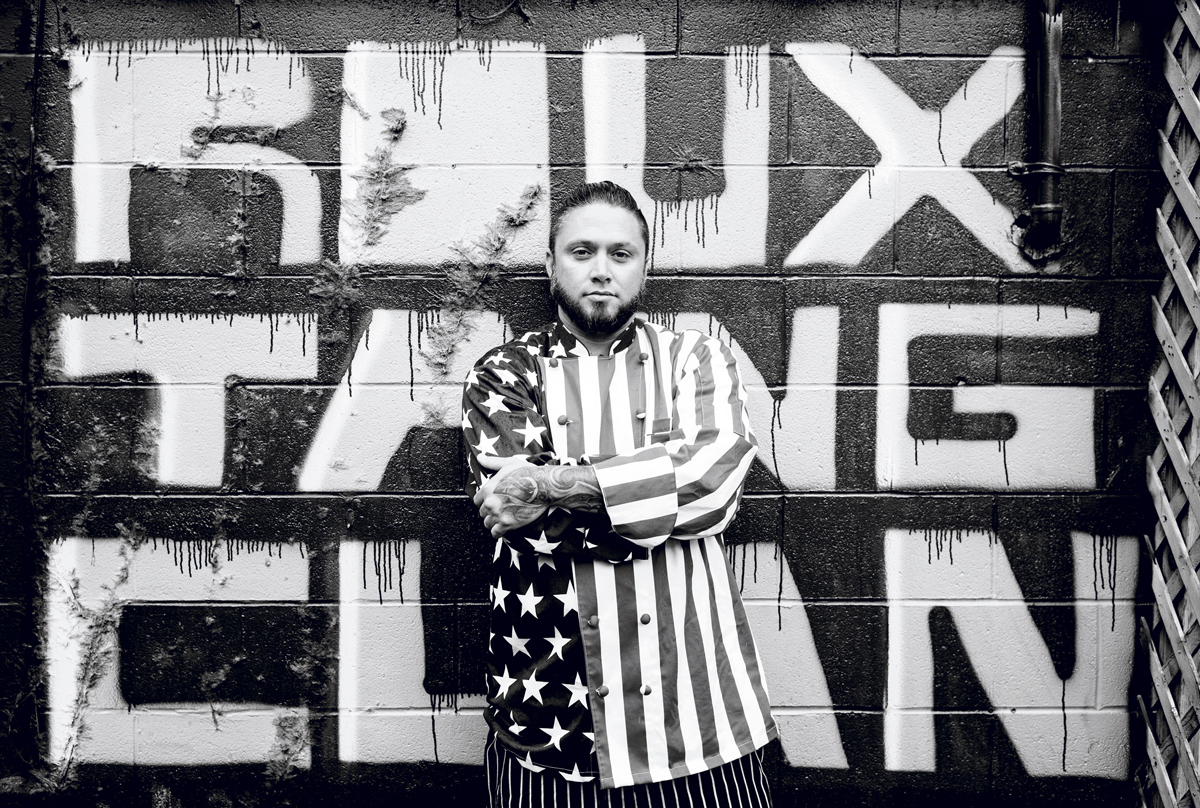 Dustin Staggers did not come into the restaurant business in the ordinary way. Staggers, 33, didn’t start out as a dishwasher and work his way to the top, as a lot of chefs do. Nor is he a culinary school grad. The first time the Tampa native stepped into a commercial kitchen was back in 2011 as the executive chef at the now-defunct 60 West Bistro & Martini Bar in St. Matthews. After a short stint at the Monkey Wrench, he opened the New Orleans-inspired Roux in the Highlands with his brother Kyle and fellow chef Griffin Paulin in October 2014. The Asian-influenced Rumplings came along the following month and, in May, the trio will open another restaurant, America. The Diner. Food & Dining sat down with Staggers to find out why he opened three restaurants in less than a year and how he finds the energy to operate them all.

How did you end up in Louisville?
I own a tax-lien consulting business. We do some work for companies that buy tax liens in bulk. It was just me and my brother, Kyle, doing the majority of the work. I want to say we started coming here in ‘05 or ‘06. I have clients all over the country and just happened to be working with a lot of companies that were buying property in Louisville.

How did you go from operating a tax lien business to cooking?
I moved out of my mom’s house when I was 14. Cooking, at first, just happened out of necessity. Then I became the guy that was cooking for friends all the time.

What made you pick Louisville over Tampa?
I was doing some private catering in Florida and looking to open a restaurant. I was having some reservations about the cost of commercial real estate there. I came here and fell in love with the people, and fell in love with the food scene. More and more, my brother and I would talk about moving here. One day I just said, ‘Let’s stay.’

Did your Tampa friends think you were crazy?
Of course! People who have never been to Louisville don’t appreciate how different it is from the rest of Kentucky. This is a really progressive place.

How did your catering business get started?
A really good friend hired me. He had a bunch of clients from out of town and he hired me to do a real nice plated dinner. After that, I figured if I’m going to cook for my friends for free all the time, I’m going to start cooking for some money.

What was the big difference between your experience as an amateur cook and as a professional?
I started a little catering business with my ex-wife in Tampa. It was pretty successful, but along the way it became about more than money. People who cook professionally usually consider it a passion. I always had a passion for cooking for people but I didn’t know I would love it professionally. That was eye-opening for me. I was so focused on my tax lien business when I was younger that I never considered doing anything else.

How did you get your first cooking job at 60 West with so little professional experience?
When we moved up here I knew one person and he was a bartender at 60 West. My ex-wife, who was my wife at the time, also started working there. I started going there all the time and the food was pretty bad. I became friends with the owner and I added some dishes that I felt would fit in better with his concept. It was a way to show them what I could do.

Did you ever feel like you were in over your head?
For about two hours I was like, ‘What did I get myself into? I’ve never done this.’ But by the end of the day I was fine. It’s actually a lot easier to cook in a commercial kitchen with your prep done for you and a dishwasher to clean up.

After 60 West, you went to the Monkey Wrench?
That happened because I moved into the area, on Kentucky Street in Germantown. It’s like two blocks from the Monkey Wrench. I knew the bar manager and he came to me about revitalizing the menu. They wanted to get back to Appalachian, Southern roots.

You recently had your first recipe published in “Sorghum’s Savor,” a cookbook by Ronni Lundy?
Yeah. She came into the Monkey Wrench when I was there and tried the fried chicken. She told me immediately that she was doing a cookbook on sorghum and she wanted to use my recipe.

Was using sorghum in the recipe your idea?
It was something I came up with from scratch. I have the ability to just write out a menu. Give me time to do a little research and I can figure out any cuisine.

You mentioned a brother. Do you have any other siblings?
I have one brother and one little sister. My brother lives in Louisville. He owns my restaurants with me.

Is it tricky doing business with family?
It is fantastic. My brother is not a restaurant guy. He doesn’t try to do my side and I would go crazy trying to do his side.

Why are you opening so many restaurants in such a short period?
As good as a food town as this is, I think there are still some cuisine niches that can be filled. I’m trying to fill them. Also, I have good people. My ex-wife is one of my GMs here. My other two GMs are people I knew from Tampa who moved up here. Having people I trust allows me to pursue what I want to do.

What do all your restaurants have in common?
I am taking the food back to basics. It is simple recipes and fresh ingredients with no pretensions. I just want to make food that regular people can eat. They don’t need to dress in a suit. They don’t have to study what they’re going to eat. It’s food for the soul. It’s food that tastes good.

Are you cooking at all three restaurants?
I cook Fridays and Saturdays at Roux. My partner Griffin handles most of the cooking at Rumplings. I cook for 10 Tables every week. When we open the diner, that’s just fun food I like to cook. I’m going to go cook over there.

What is 10 Tables?
It is a pop-up restaurant concept that Griffin and I started with Eric Morris of Loop 22 in January.

Do you have to brush up on the various cuisines?
Diner food is something anybody can cook. Creole food is something I like to cook for myself, anyway. I’m always picking up cookbooks and learning new stuff about the cuisine. I was just in New Orleans three weeks ago. I head down there a few times a year just to get new ideas and techniques.

How do you hone your skills?
I read a lot of cookbooks. I read a lot about cooking in general. The people who work for me, I also pry into what they are doing to get new ideas.

Why do you think Louisville is such a culinary hotspot?
In Tampa, everyone is in such stiff competition with each other. It’s not that way here. All the chefs are supportive of each other. It is also geographic location. We are not the Midwest. We are not the South or the North. You end up in the odd melting pot of people from different backgrounds.

What is your favorite food memory?
We used to skip school in the 11th grade. We’d go to my buddy’s house and I’d cook breakfast for about 15 of my delinquent friends. I would make sugar bacon and eggs, and my friends loved it.

So who is the biggest influence on your cooking?
I don’t know if it is a person, per se. I would say it was more my environment. Moving out so young, I was forced to cook. I didn’t work in commercial kitchens. I’m not the guy who started as a dishwasher and worked his way up.