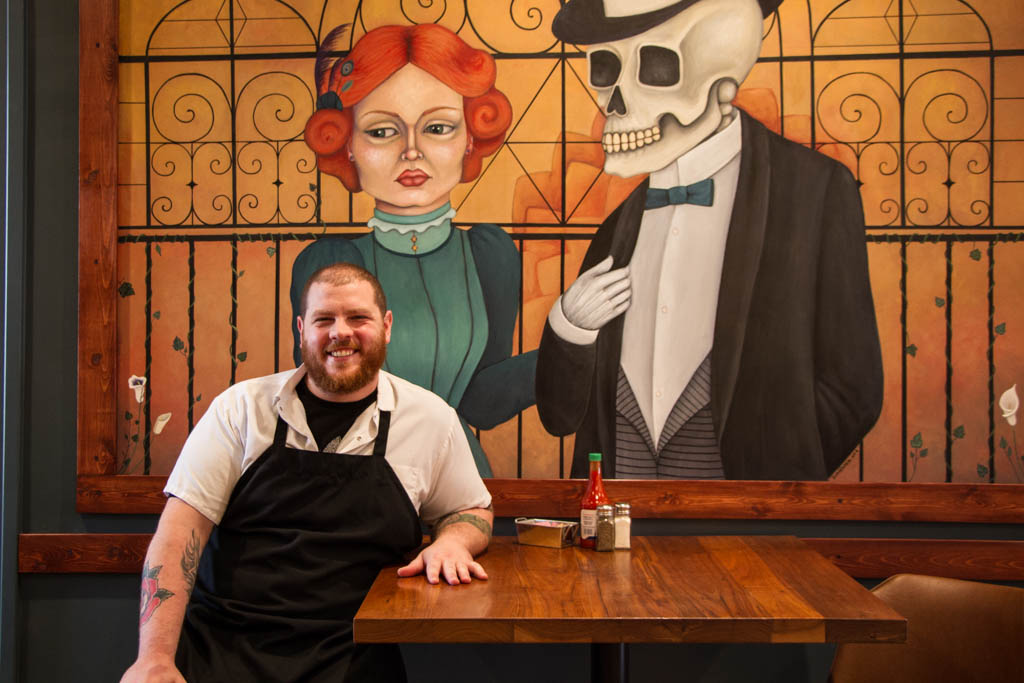 Couvillion, Louisville’s new deep south restaurant in the former Finn’s building at the Germantown Lofts at 1318 McHenry St, is set to open April 16. The restaurant will be open Monday, Wednesday, Thursday and Friday from 4- 10 p.m.; Saturday 11 a.m. to 10 p.m. and Sunday 11 a.m. to 9 p.m. Their menu says they are closed Tuesdays because they “eat tacos on Tuesdays.”

Couvillion (prounced Coo-vee-yon) is the newest concept from Chef Paul Skulas, formerly of Portage House. Portage House was sold to Fat Lamb owner Dallas McGarity last month. Skulas says that he and the previous owners were able to build Portage House from scratch, so it has been interesting putting a restaurant into a building where he is trying to fit into someone else’s “shoe.” The building has three interior dining areas and a great exterior patio.

Skulas owns the new restaurant with two partners who wish to remain anonymous but are present in small ways like the slogan on the menu “So good, it’d make a rabbit smack a bear,” which was a saying by one of the other owner’s grandfathers.

Skulas used to cook in Mississippi, and he and his wife visit Louisiana every year because they love the culture. He took his staff to New Orleans when deciding on their menu, so everyone could taste the food and beverage in order to experience the culture first hand and have a reference point. It resulted in a menu with offerings such as smothered pork chops, catfish couvillion, cracklins (skin-on, twice-fried chunks of pork belly, side of pepper jelly)  pepper jelly braised mussels and of course red beans and rice as well as a variety of other southern favorites like collard greens, house pickles, gumbo, boudin balls and desserts like bourbon banana pudding.

The menu also features vegetarian options as noted in the menu with the phrase, “Skip the meat; try the beet.” They have beetloaf, which is a beet rice, cheddar, and  mixed nut base loaf,  and beet burgers. Perhaps most surprising for special diets is their gluten free cornbread. Skulas said most of the menu is gluten free.

The walls are adorned with fake animal skulls, unique art, kitchenware and New Orleans style paintings by Whitney Carpenter. The largest painting of a woman with a skeleton suitor was commissioned by Skulas and his wife after they saw something similar on a garage in New Orleans. The hardwood flooring and raw lumber wall behind the bar give a hint of life by the bayou.

The jackalope on the wall by the bar is their unofficial mascot. It’s a fictional animal that can be lured out of hiding with a bowl of whiskey, which causes it to be inebriated and slow so you can catch it. So, they’ll be  offering the jackalope’s whiskey or bourbon of the week.

Bar Manager Dave Tuney created the cocktail menu and says, “Every cocktail we have on the menu is taking inspiration from the flavors of Paul’s menu. We’ll work with that and have several base cocktails like the Young Buck — bourbon, Peychoud’s bitters from New Orleans , Ale-8-one ginger ale —  and Lawless, our take on a Prohibition era cocktail called Scofflaw — bourbon instead of Rye, aromatized wine, a five-spice grenadine we built in house, and some of the herbs and flavors Paul uses in his menu.”