Home DRINK Beer Craft Beer: Where it has been, and where it is going 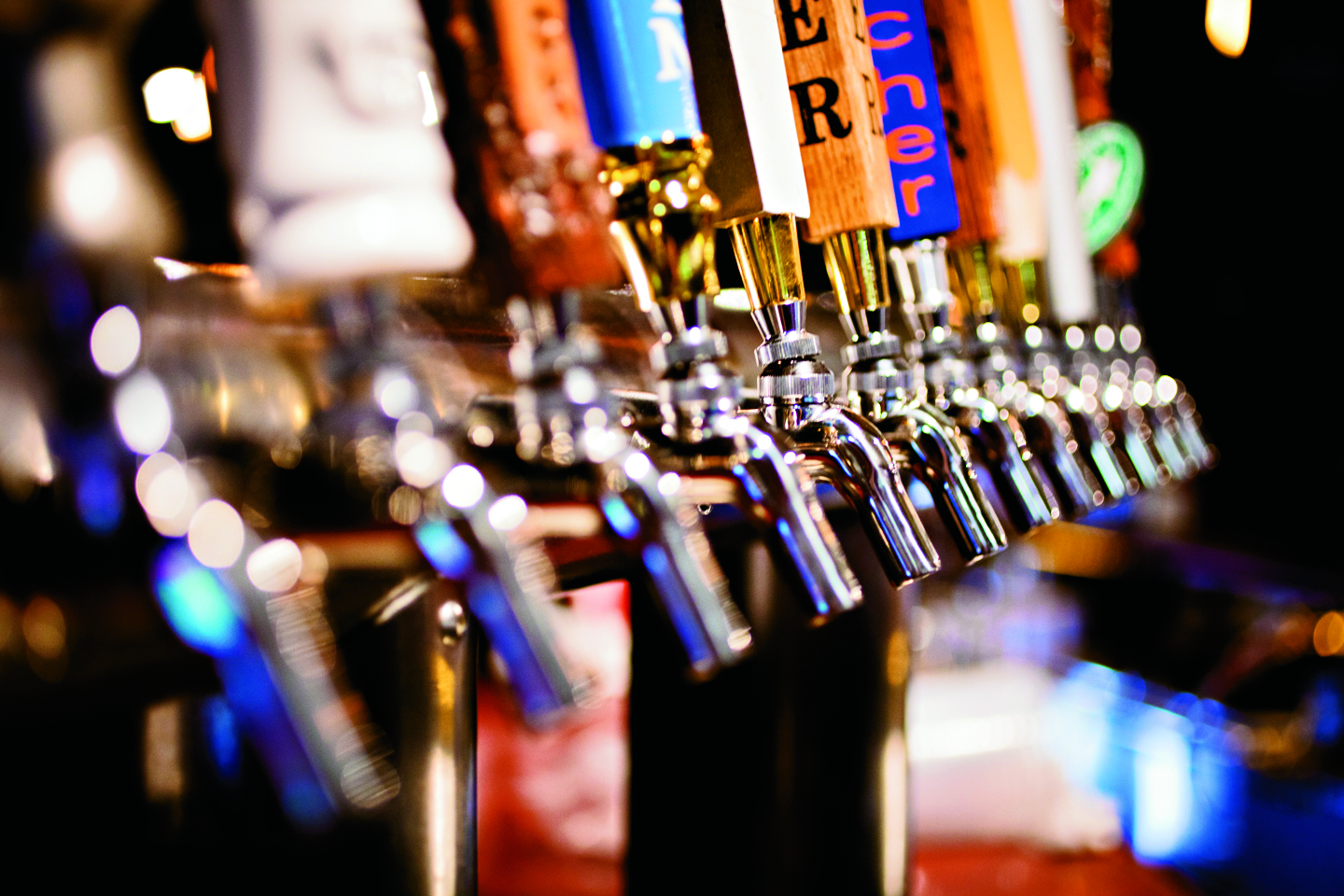 In 1976, the birth of New Albion Brewing Company in California presaged a revolution in beer. Four decades later, under the nom de plume of “craft beer,” the revolution seems permanently embedded in American culture, although the attendant hysteria about its growth may be obscuring a fundamental question: What is craft beer, anyway?

When it comes to epistemology, former President Bill Clinton is my choice for getting to the heart of the matter: It depends on what the meaning of the word “is” is. Keeping Clinton’s Theorem in mind, let’s take a quick look back at Craft Beer Nation’s year in 2014, as viewed by the numbers.

Never have there been this many brewers in America. More than 3,000 craft brewing entities are operational. On average, 1 ½ more craft breweries are opening each day. Craft beer sales grew 18% in the first half of 2014. Craft beer’s fan base is diversifying, with 32% of its present volume being consumed by women. The number of craft brewers canning beer has doubled since 2012. Surveys show that in 2014, 38% of American households purchased craft beer at some point during the year. But what is craft beer, anyway?

Imponderable questions for the industry

Is craft beer an objective or a subjective label? Can it be made by a big producer, or must it always be from a small brewing operation? Must it be made near to its consumers, or can craft beer have a far-flung consumer base?

The Brewers Association, craft brewing’s trade group, has a vested interest in these questions, as does the federal government’s Tax and Trade Bureau. State legislators and alcoholic beverage control agencies are eager to know, too.

Covetous multinational monoliths, watching with alarm as demand for their traditional flagship lagers erodes, desire craft beer’s marketing image and sales demographics. They prefer consumers to regard “craft” as a vague advertising term and to ignore the small print.

Simply stated: From business and regulatory standpoints, craft beer keeps getting bigger and bigger, making it ever harder for the segment to espouse a foundational ethos of smallness. Craft beer remains an artistic phenomenon best experienced locally, but one inevitably destined to mimic commercial imperatives through distribution.

For many, the essence of craft beer is spiritual, not numerical, but while poets and purists prefer to rhapsodize about hoppy, malty, sweet and sour aesthetics, politicians and bureaucrats demand quantifiable criteria, transferable to a ledger sheet, because awarding “small” businesses an excise tax reduction implies an accepted, concrete definition of small, and in beer, this measure begins with annual production by the barrel (31 gallons).

The issue is the total number of barrels, with beer style and brewing methods generally superfluous, leading to numerous statistical anomalies and Jesuitical reckonings.

Big vs. small, local vs. national

What is the difference between Samuel Adams, a company traded on the New York Stock Exchange with more than 2.5 million barrels shipped and $600 million in sales in 2013, and the newly opened My Dream Nanobrewery located in the former ice cream stand down the street, which might produce 125 barrels this year if the owner somehow can swing crowd sourcing on another piece of used dairy equipment to act as a fermenter?

According to the Brewers Association, none. They’re both craft brewers, and both should receive discounted excise tax bills owing to their small-scale, artisanal size.

Then again, perhaps size doesn’t matter as much as technique. Until 2014, the Brewers Association would not accept Yuengling, America’s oldest (started in 1829) and largest family-owned brewer, as worthy of membership in the club. Why? Because Yuengling has continued to brew American-style “adjunct lagers” with corn and rice, a practice regarded by purists as bastardization.

Is it really? Many craft beer enthusiasts detest adjunct lagers, but these remain legitimate American hybrid styles, as improvised by 19th-century German immigrant brewers, who found themselves working on the wild frontiers of “civilized” brewing and adapted accordingly.

Craft Beer Nation gave it a rethink, and now breweries like Yuengling and Schell can be stamped “craft,” because adjunct lagers aside, at least they’re not owned by robber baron multinationals.

Don’t be confused. Ownership is very much a part of craft beer’s Clintonesque equation, and that’s why Goose Island has become Trojan Goose. The Chicago brewing company’s venerable Bourbon County Stout series is the status symbol of choice for hoarders, collectors and narcissists, but since Goose Island was wholly absorbed by AB-InBev, it no longer can be considered craft.

When craft beer is defined in these ways – by barrels produced, approved recipes and corporate structure – and consequently, when self-identified craft beer drinkers persist in enjoying certain beers outside the “official” definition, from Goose Island to Blue Moon, then the results are cognitive dissonance and a commonly stated, exculpatory point of view holding that craft definitions don’t matter at all, so long as the beer in question is “good.” This brings us full circle: It depends on what the meaning of “good” is. Good luck with that one.

What does craft beer’s future hold?

I’m as confused as anyone else, but here’s what I think.
In 2015, expect to see a growing divide within Craft Beer Nation, reflecting an evolving marketplace as it pertains to brewpubs and production breweries.

The superlative Lafayette Brewing Company in northern Indiana is an example of a brewpub that does not distribute its beers outside its own building, or does so only sparingly. People come to it.

Conversely, Lexington’s Alltech (Kentucky Ale) relies on production and wholesaler distribution of its packaged beers to bars, restaurants and package outlets in Kentucky, Indiana and numerous other states. It sends beer to the people.

Some regional breweries, including Bluegrass Brewing, West Sixth, NABC and Three Floyds, are both brewpubs and production brewers. Given that by early 2015, the state of Indiana will be home to more than 100 breweries, with another two dozen in Kentucky, and that in 1982, when I graduated from college, there were fewer than 100 breweries in the entire country, we come to the primary tankard of contention within Craft Beer Nation: Is there a point of saturation?

Probably so. My personal view is that soon, most of America’s “small” breweries will be compelled to devote an all-hands-on-deck mentality to one or the other, either a brewpub business model or a production and wholesale distribution model. It doesn’t mean that overlapping will cease, only that the craft beer market as symbolized by finite tavern faucets and store shelves will cease to support an exponential expansion of brands.

Brewpubs will survive and thrive as breweries, restaurants, civic novelties, watering holes, community centers and tourist destinations, but you won’t find their beers elsewhere to any great degree.

Those sufficiently capitalized craft beer production breweries capable of adapting to changing tastes in styles and packaging, and supporting sales teams and marketing budgets – in short, the ones able to successfully emulate the multinational beer sales playbook – will have beer in every Costco and Liquor Barn.

What is craft beer, anyway? I know craft beer when I taste it, and it is best tasted locally. Beyond these two affirmations, maybe we’ve traveled past the point of knowing. The boomerang has returned, and it’s all just Beer now … again.

What to expect in Louisville in 2015

Akasha Brewing Company is located downtown in NuLu at 909 E. Market St., next to Feast BBQ. Co-owner Rick Stidham aims to open in February and promises funk to come: “We’ll be brewing what we love to drink, and a lot of the time that will be sour and/or Brett (Brettanomyces) ales.”

Roughly two miles due south, at 1036 E. Burnett Ave. in Germantown, the Beer Engine readies for its Louisville debut in March after a lengthy build-out, as humorously noted in a press release: “We’ve gone through some zoning issues, some weather issues, heck, even some raccoon and opossum issues while trying to turn the old Zeppelin Cafe into our lifelong dream.”

Brian Holton, founder of the original Beer Engine in Danville, Kentucky, foresees “six house brews on tap when we open, gradually ramping up to 13-14. Food-wise, expect interesting pub fare made with local ingredients.”

In Jeffersonville, Ind., Flat12 Bierwerks (founded in Indianapolis in 2010) is converting a complex of buildings at 130 W. Riverside Drive into its second production brewing facility. The tap room is open, with Flat12 specialties like Half Cycle and Pinko shipped from Indy, as well as a concise menu of substantial snacks. Look for brewing to begin in mid-2015.

Finally, Richard Otey’s Donum Dei (“Gift of God”) Brewery will operate in New Albany, Ind., at 3211 Grant Line Road, roughly 300 yards from the New Albanian Brewing Company’s original location.
“We want to be a pub where people can sit and communicate,” Otey says. “We will attempt to have a balanced beer portfolio, with panini sandwiches and soup.” Opening is slated for late spring.

Hip Hops: My bucket beer list does NOT come with sliced fruit, so don’t ask