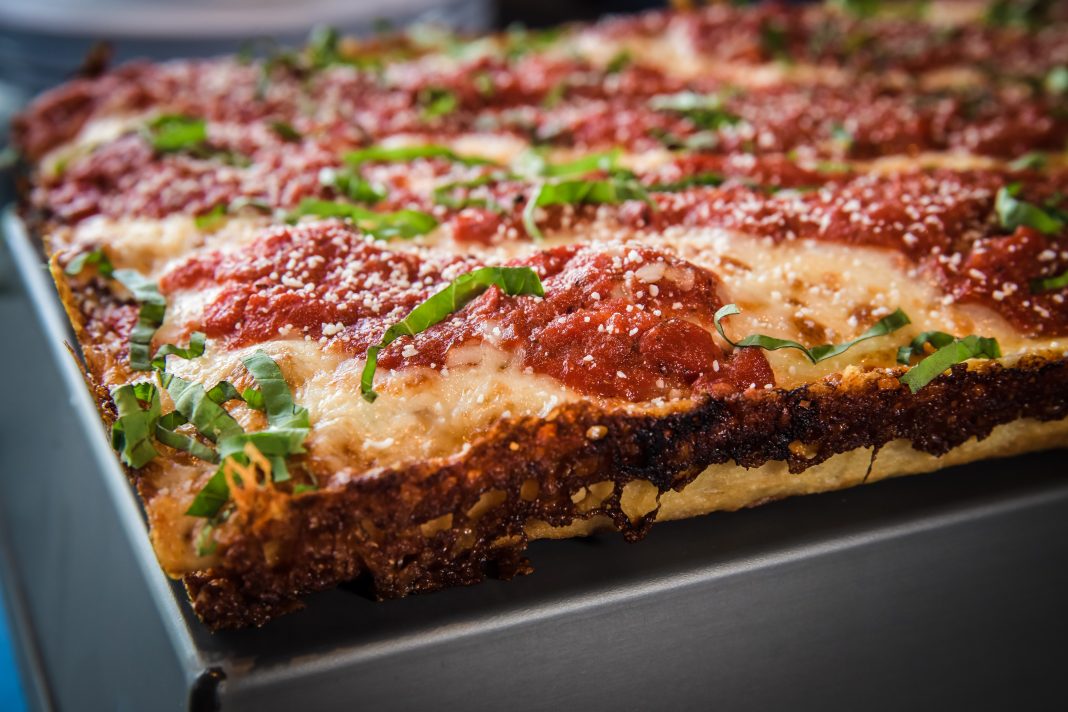 It’s about time we gave due consideration to Detroit-style pizza, and as such, your attention is directed to Eater for this 2016 primer by Brenna Houck: Detroit-Style Pizza: The Definitive Guide – “from red tops to crisp edges, everything you need to know about the iconic ‘square'”

Very occasionally one finds a guide that describes the Detroit square as a “Detroit Red Top.” It’s a moniker that serves to describe the particularly uncommon construction of the square pizza, with a crust covered in reverse of what you’d expect from a traditional pizza — toppings like pepperoni on the bottom, followed by loads of cheese and red sauce drizzled on top. While perhaps unconventional, the “red top” helps to avoid a soggy crust. The tradeoff being, of course, fewer crispy pepperonis.

It is 362 miles, most of the distance accessible via interstate highway, from Detroit’s iconic Buddy’s Pizza to 1315 Herr Lane in Louisville, home of the BoomBozz™ Pizza & Watch Bar Westport Village location.

At Westport Village only, BoomBozz is introducing a new Detroit-style pizza, and according to a handy information release, there’ll be half-off specials beginning today (July 7), running through July 14 – again, at the Westport Village BoomBozz only.

BoomBozz is a multi-award winner of Best Pizza including being named the best pizza by the Food Network; and was also recently named one of America’s Top 50 emerging restaurant chains by FSR Magazine.  Since it first opened in 1998, it has expanded to nine locations regionally.

Edibles & Potables: We want garum (the ketchup of the ancient Roman gods)