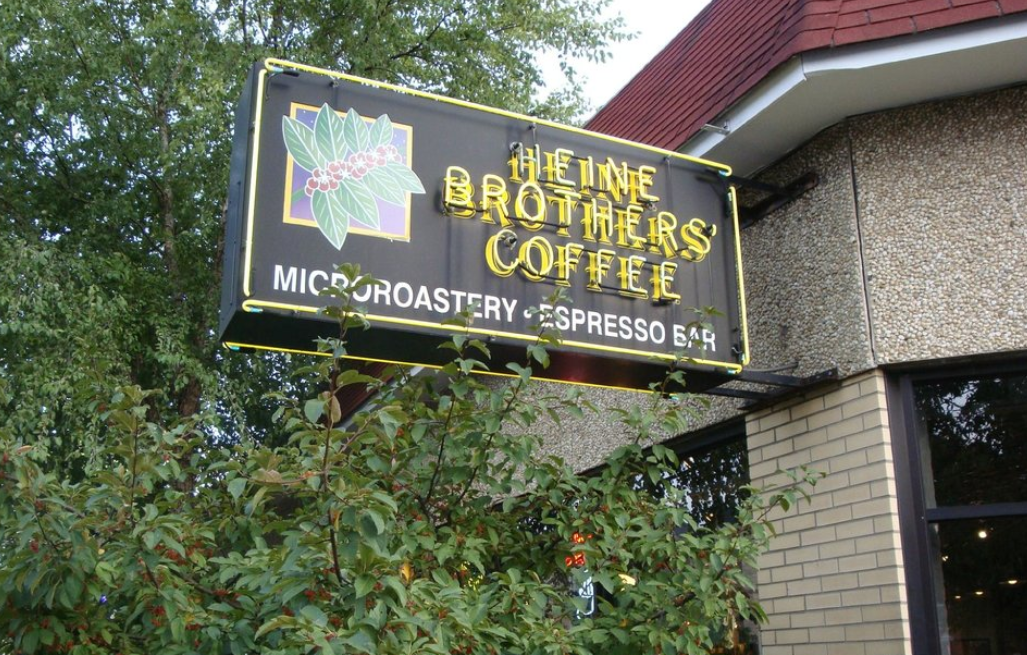 At first blush, it seems like a simple food ‘n’ drink story, and the sort of business arrangement standing to be beneficial to both parties. First, Heine Brothers’ Coffee, a Louisville institution since 1994, will shutter its two-decade-old shop at the Douglass Loop (2200 Bardstown Road). An information release provides details.

“We’ve had a great run at the Douglass Loop and are now turning our attention to operating coffee shops with drive-thrus,” said Mike Mays, co-founder and president of Heine Brothers’ Coffee.

Then, after a brief renovation, TEN20 Craft Brewery’s second satellite taproom will occupy the space, opening this fall. The brewery’s primary location is in Butchertown (2020), and its first offshoot debuted in 2021 in Anchorage.

“TEN20 is excited to bring our fresh craft beer to the Highlands neighborhood, and will continue to serve Heine Brothers’ locally roasted 100% organic coffee, along with expanded operating hours,” said Jim McGuire, TEN20 co-founder. “From the start of TEN20, we have been focused on our mission of ‘bringing people together for good’ and we will continue to do that in this exceptional gathering space.”

However, it didn’t take long for another side of the coin to travel the highways, byways and drive-thrus of social media. The Courier Journal’s Lucas Aulbach and Caleb Stultz reported the other angle on Friday.

Heine Brothers’ Coffee abruptly closed its popular shop in the Highlands on Thursday, prompting cries from employees that the move is nothing more than union busting.

“Heine Brothers’ Coffee has jeopardized our livelihoods for the coming weeks, they have closed a community space in Douglass Loop, and they have shown us once again that we are just replaceable cogs in their corporate machine,” the Heine Brothers’ Workers Union said in a statement before a Friday rally that drew more than 30 people at the site.

TEN20 is directing all inquiries to Heine Brothers’ Coffee, which says the employees affected by the Douglass closure are being offered positions at other locations, and reiterating the business reasons for the decision.

As for beer reasoning only, it’s a solid move by TEN20.

TEN20 will rotate its beer offerings at the Douglass Loop location, featuring favorites from head of brewing Larry Horwitz, such as Storyteller Hazy IPA and 1834 Lager, in addition to brews made specifically for the Highlands location. For its 100th batch of beer, TEN20 recently collaborated with Monnik Beer Company and Heine Brothers’ on a limited-release beer, Lifted Sun Coffee Blonde Ale, utilizing Heine Brothers’ organic fair trade coffee sourced from the Sidama Coffee Farmers Cooperative Unions, which represents smaller cooperatives and more than 76,000 individual farmer families.

Ironically, there was a relevant National Public Radio segment on Friday: “One unionized. The other did not. How 2 Milwaukee cafés were changed by union drives,” by Andrea Hsu.

Organizing in coffee did not begin at Starbucks. It kicked off several years ago in independently owned coffeehouses — the kind of small businesses one might think of as the least likely of workplaces to unionize, whose owners are a far cry from billionaire Howard Schultz.

In Milwaukee, two different union drives, one year apart, reveal the kind of power that unions can wield, whether the campaigns are successful or not.

Our coda comes from John, a friend on social media. I hope he doesn’t mind the borrow.

The great thing about Louisville is that there are so many amazing choices for where to get a beer–or a coffee. Drink what you love and support the businesses that support your values. I fully intend to do the same.