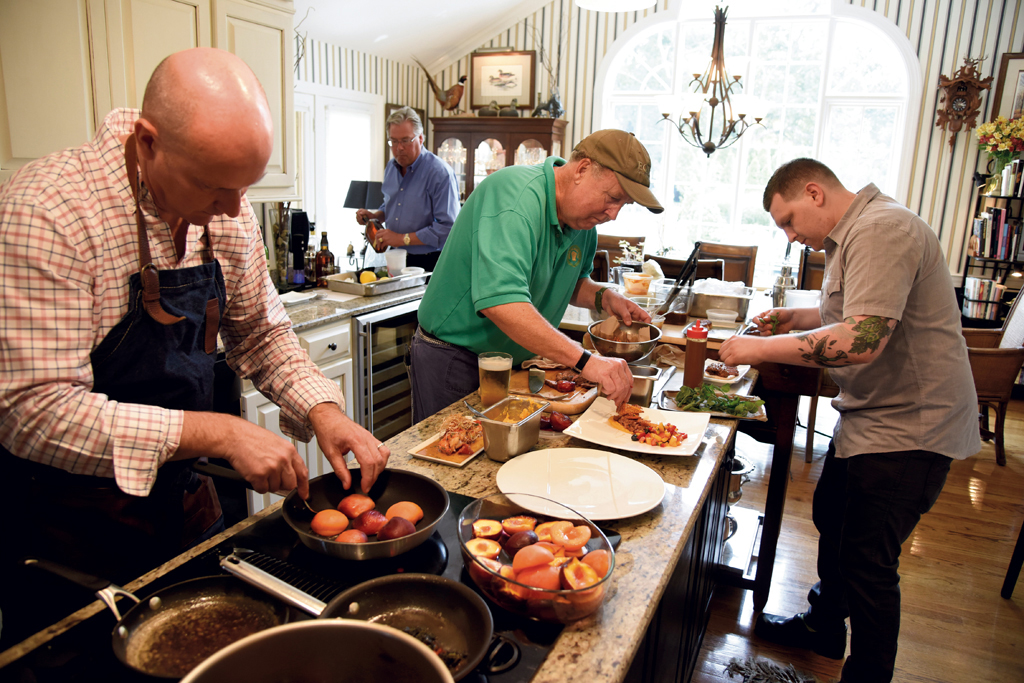 With the growing emphasis on using local ingredients whenever possible in cooking, it is only natural that restaurant chefs would experiment with uses for Bourbon, a local product with a long and storied history in Kentucky. As Jess Inman, chef at Equus, said, “We might as well embrace what is around us.”

F&D invited Inman, Shawn Ward of Ward 426, and Dean Corbett of Equus and Corbett’s: An American Place to put together a party menu that highlighted the flavor potentials in cooking with Bourbon. And Tim and I added a rich Bourbon-enhanced dessert alongside a seasonal Maple Manhattan cocktail, which plays nicely with flavors born of the charred oak barrel.

Bourbon’s complex layers of flavors complement many foods. What many do not know is that Bourbon possesses over 200 discernible flavor notes, which makes it far more complex than wine. Bourbon is delicious as a marinade, in addition to adding a depth of flavor to appetizers, sides, entrees and especially dessert.

The dish Jess Inman offers here can be found on the Equus menu. “I think the addition of Bourbon gives a hometown feel to these dishes,” Inman said. He likes the way Bourbon’s inherent sweetness intensifies when reduced by cooking, flavors reminiscent of honey. “The flavors really go with cornbread,” Inman said. “Bourbon and cornbread are best friends.”

Shawn Ward, too, sees an affinity between Bourbon and corn dishes. “If I am doing a dish that goes well with corn, I like to enhance it with Bourbon. I like to use it more as a seasoning than as a main ingredient,” Ward said. He, too, is taken by delicate flavors revealed in Kentucky’s native spirit when cooked. “Different Bourbons have different properties,” he explained. “Some are nice and smooth upon reduction; some continue to have a bit of heat.” Since high-proof Bourbons are not only costly, but potent, he shies away from them in cooking. Some popular sipping brands, such as Old Forester and Woodford Reserve, are also good ones to cook with, he said. 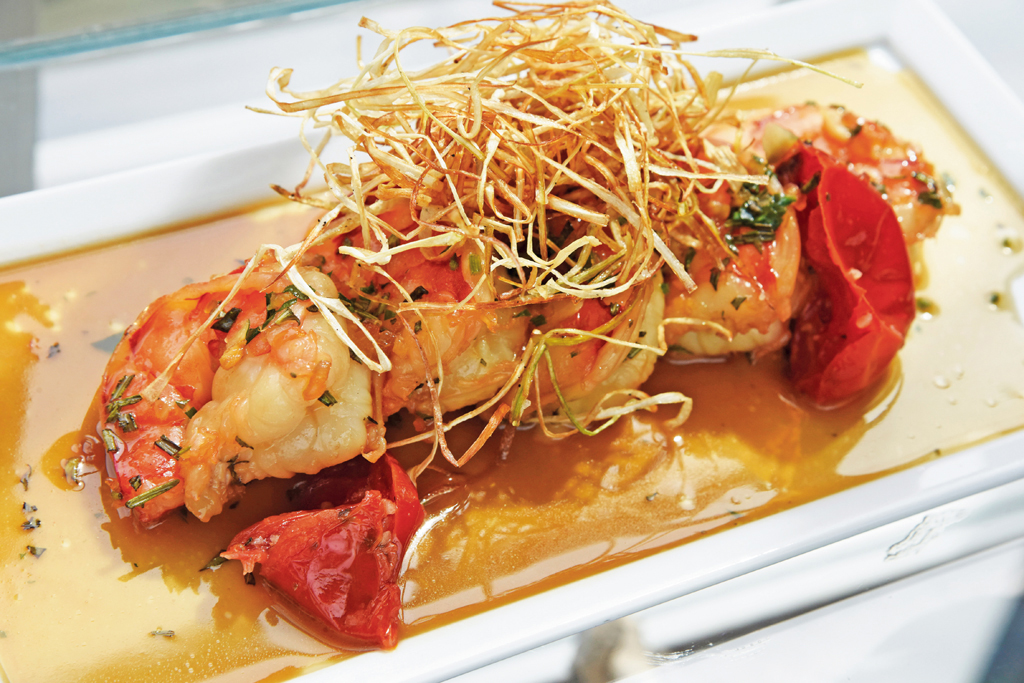 In a hot sauté pan melt 4 tablespoons of cold butter while adding garlic, shallots, rosemary and brown sugar. Stir together until garlic and shallots are translucent. Deglaze pan with lemon juice and white wine and heat for about 20 seconds. Add Worcestershire sauce and Bourbon (reduce or flame the alcohol). Add rock shrimp and cook slowly over medium heat, turning shrimp frequently. Add chicken broth. Make a slurry by mixing together water and cornstarch. Add to stock gradually to thicken. Reduce heat and add remaining cold butter. Season to taste with Tabasco, salt, and pepper. Add chives. 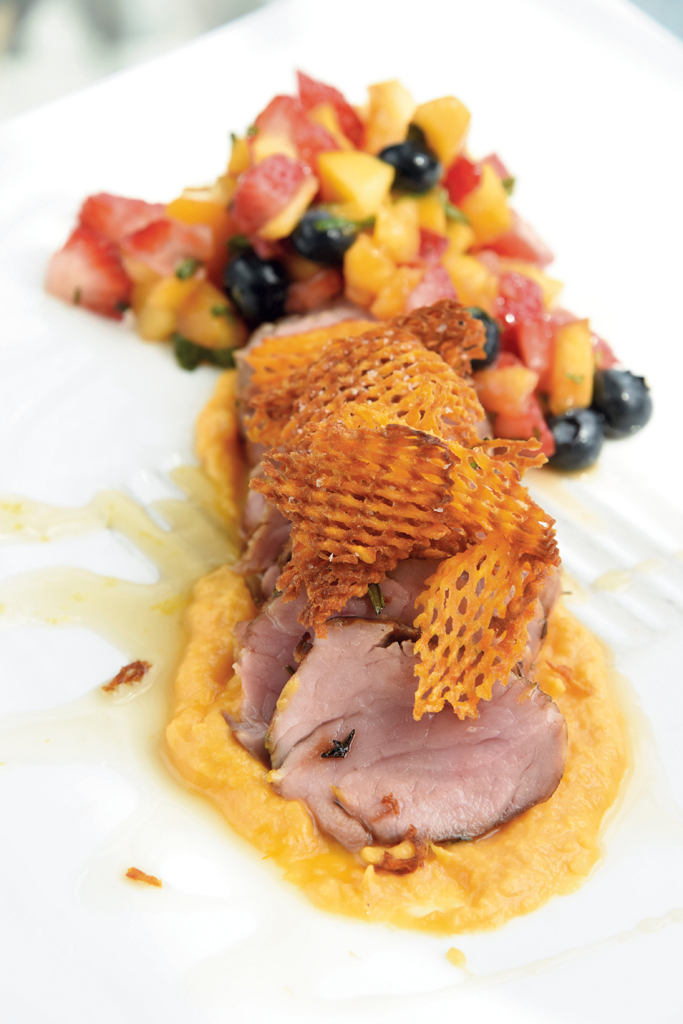 For the pork tenderloin

For the Bourbon marinade:

Place Bourbon in small saucepan; bring to a simmer. Carefully ignite in pan to burn off alcohol. When flames subside, remove from heat and cool.

When cooled, stir in maple syrup, soy sauce, garlic,
shallot and orange zest. Place pork tenderloins in a large sealable plastic bag, add marinade and refrigerate at
least 1 hour or up to 3 hours.

When ready to cook, drain pork, pat dry and season
well with salt and pepper. Grill over high heat 10 minutes
or so each side, to internal temperature of 138-140
degrees. Remove from heat and allow to rest.

For the sweet potato mash:

Cook sweet potatoes and shallots in water to cover until potatoes are very soft. Drain well and mash, adding in brown sugar, butter, buttermilk and minced rosemary.
Taste and season with salt and pepper.

For the fruit compote:

Combine all ingredients, adding mint in at the end. Compote will need at least an hour for flavors to marry and bloom.

Heat Bourbon in a pan to a simmer, ignite to burn off alcohol. Let cool. Stir in sorghum. Add to squeeze bottle for garnishing finished dish later. 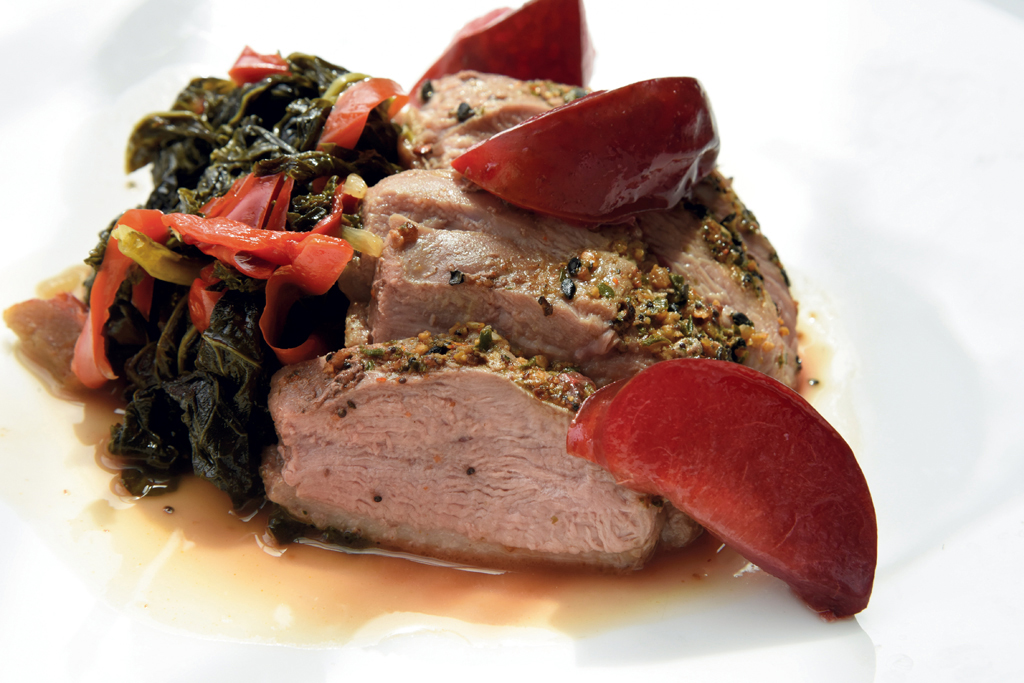 For the duck breast:

Score the skin on the duck in a criss-cross pattern. Liberally apply togarashi spice blend on meat side of breast and salt and pepper to taste. In cold, heavy-bottomed skillet place duck breasts skin side down. On the stovetop, heat pan to medium heat until skin gets crispy (about 6-7 minutes). Move to a preheated oven at 350 degrees and roast for about six minutes or until the duck reaches an internal temperature of 148-150 degrees. Remove from heat and allow to rest.

For the collard greens:

Render bacon in a large pot until crisp. Add butter and brown sugar. Once butter and sugar have dissolved, add shallots and red pepper. When shallots and red pepper soften, deglaze with Bourbon. Simmer until reduced by one-third. Add chicken stock and greens. Simmer 45 minutes and season with salt and pepper and red pepper flakes. Taste greens for toughness and bitterness, and if necessary, continue simmering until collards are mellow, about 10 more minutes.

Note: Use the peaches portion of the recipe below.

Thinly slice duck breast on the vertical and arrange overlapping on plate. Spoon a generous portion of collard greens beside the duck. Top with roasted peaches. 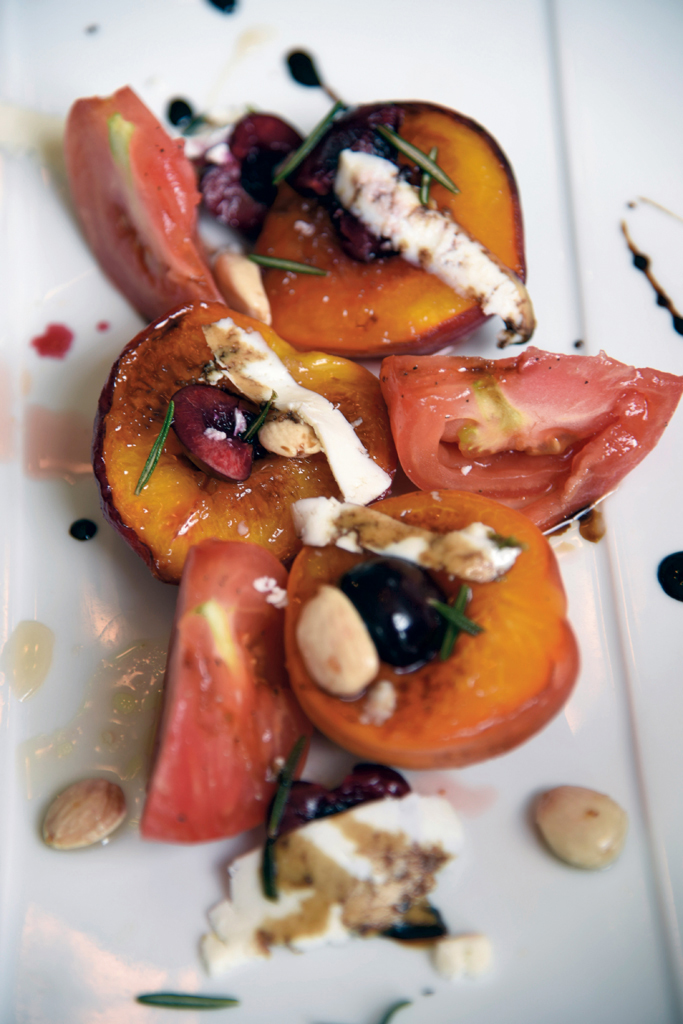 Toss peaches with sugar. In a saucepan combine 1 cup olive oil and 1 cup vegetable oil with garlic and heat until warm. Add 1 sprig rosemary, thyme, bay leaves, and basil and remove from heat. Cover and let sit for an hour until flavors develop. Place fruits in baking dish and strain herb oil over. Cover with aluminum foil and place in a 225-degree oven for 35-45 minutes until fruits soften. Set aside. In a mixing bowl combine 1 cup oil with white balsamic vinegar and pour over tomatoes. Set aside.

Pit cherries and place in a bowl. Mix the rest of ingredients in a pot and bring to a boil. Reduce to a simmer 10 minutes. Let cool. Place cherries in a quart jar and cover with pickling liquid.

Arrange the peaches and tomatoes on plate, place almonds around plate, shave cheese on top, and garnish with cherries, reserved herb oil and balsamic reduction. 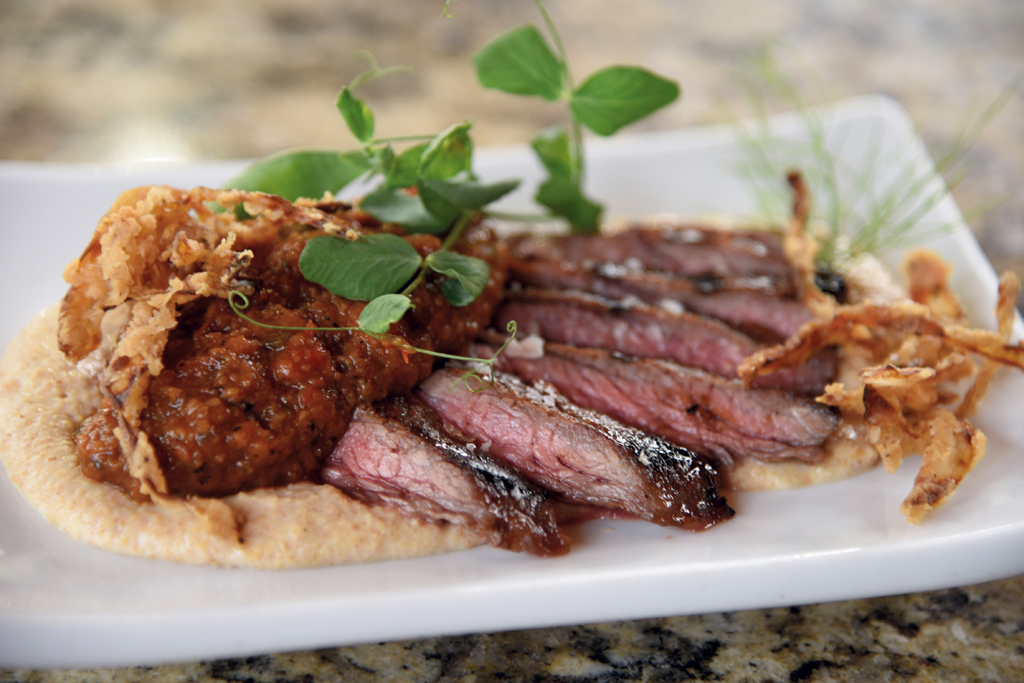 For the Bourbon marinade:

Combine all ingredients thoroughly in a bowl, whisk and pour into container or 2-quart plastic bag. Add steak and marinate at least 1 hour. Remove steak from marinade and pat dry. Grill or broil to desired doneness (flat iron steak is best if served on the rare side).

For the cornbread purée:

Note: For the cornbread, use your favorite recipe or see “Cooking

with Ron” on page 40 of this issue for his version.

In a large saucepan, bring the milk to a simmer over medium heat. Crumble cornbread into the hot milk until texture is fairly thick and almost spongy. Remove from heat and carefully purée mixture in blender or food processor.

For the romesco sauce:

Toss diced baguette with ¼ cup olive oil, salt and pepper. Place in one layer on sheet pan and bake at 350 degrees 5-6 minutes, toss and turn.

Return to oven until golden brown, another 5 minutes or so. Set aside.

For each serving, spoon a scant half-cup of cornbread purée onto plate. Top with slices of grilled flank steak. Dress steak with the romesco sauce. 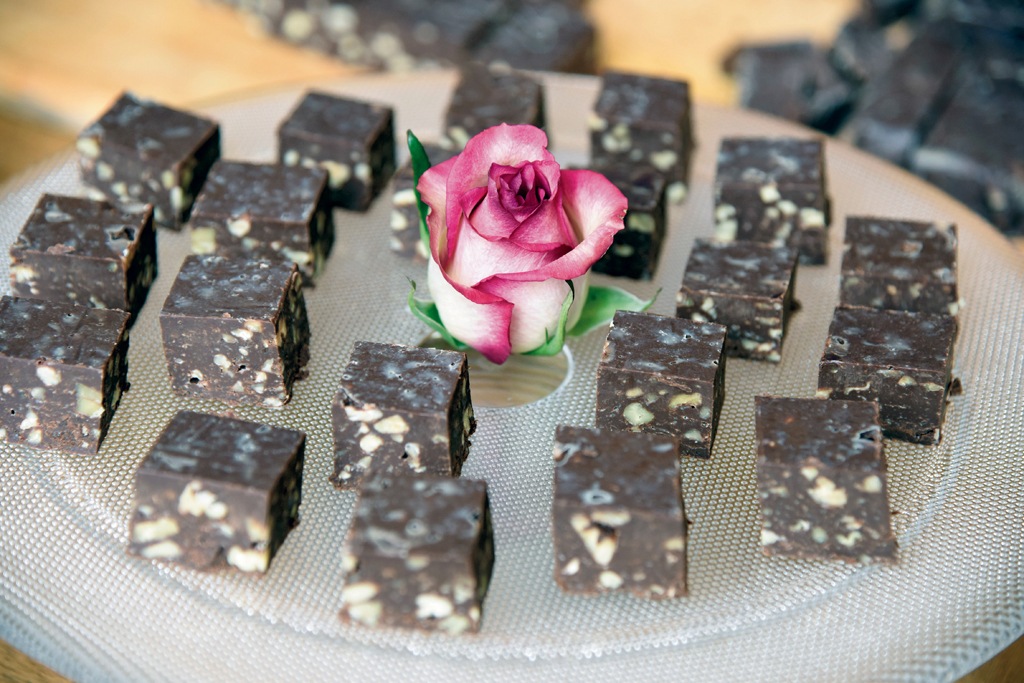 Line an 8 x 8-inch baking dish with waxed paper, leaving a 2-inch overhang on each side.

In a large, microwaveable bowl, add the chocolate chips. Heat on high for 90 seconds. Remove and stir well. Repeat for another 90 seconds and stir until fully melted. Add sweetened condensed milk, Bourbon, vanilla and salt. Stir until smooth. Add nuts and stir until fully incorporated, then pour into prepared pan. Refrigerate for 1 hour, or until firm. Using waxed paper, lift fudge out of pan and turn onto a cutting board. Remove waxed paper and cut into 8 slices by

8 slices to make 64 one-inch squares. Wrap fudge in waxed paper and store in airtight container in refrigerator for up to one week. 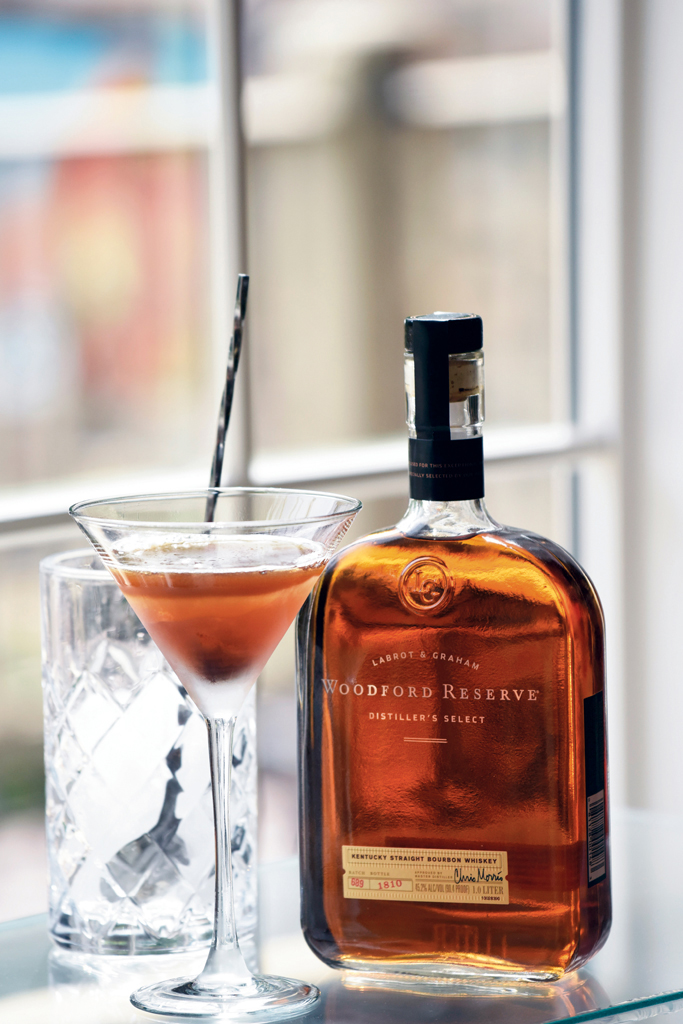