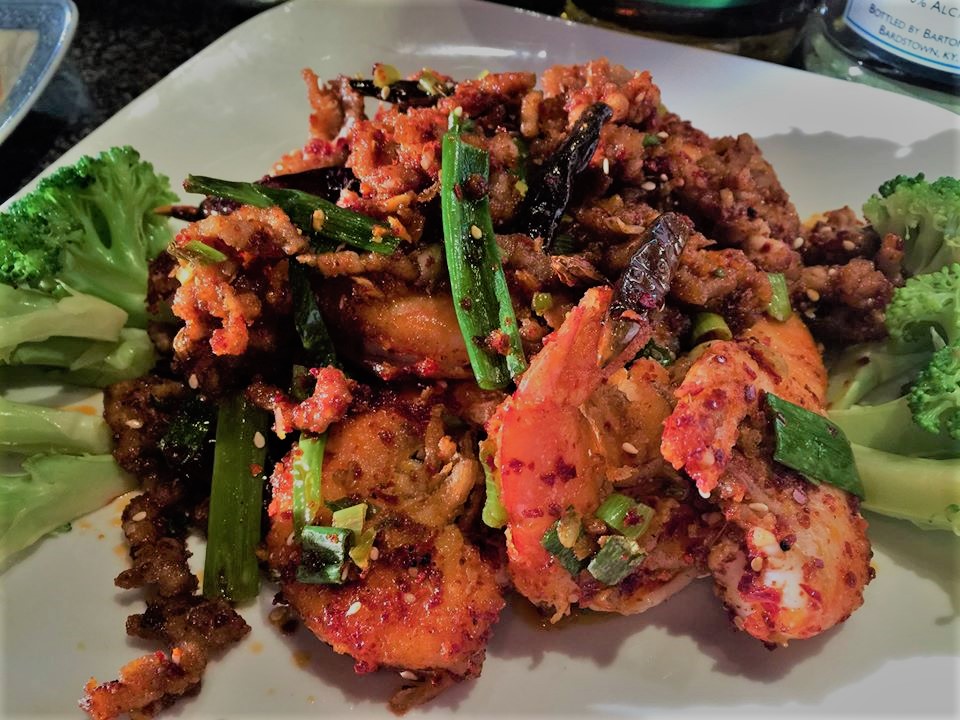 Yesterday your digital correspondent began a long-gestating painting project in the library wing of our palatial mansion, rendering him into a paint-, if not ink-, stained wretch. Another shift beckons on Sunday, albeit with the prospect of takeout Chinese at the end of the day, reminding me of this book review I wrote at my blog in 2017.

Chop Suey: A Cultural History of Chinese Food in the United States, by Andrew Coe (2009).

Before considering the myriad factors that brought Hot and Sour Soup to Dubuque, allow me to observe that using the term “melting pot” as a metaphor for the assimilation of immigrants in America remains as problematic as ever.

After all, mixing together various brightly colored paints does not result in a rainbow; rather, it yields a dull, uniform gray – or Miller Lite, which is even worse.

Besides, haven’t most Americans tended to prefer a selective and purely personalized interpretation of this doctrine?

For them, a melting pot is wonderful in theory, and less desirable in practice. Usually the serial bigots among us recommend that several among the rainbow’s hues be excluded. So it invariably goes – and we constantly fail to make good on our founding mythology.

Still, some melting pots make more sense than others. Though not without significant asterisks of their own, pursuits like music, sports and food are among those areas of shared interest that have been known on widely scattered occasions to enable the better angels of America’s traditionally spotty nature.

It has been a Long March, indeed.

From origins in xenophobic fear and derision, we’ve come to the stomach-warming point of finding a Chinese restaurant, buffet or food truck in just about every American town with a population of 1,000 or more – sometimes two of them, as well as a gradual flanking movement toward greater authenticity, as with the “authentic” Chinese menus offered by Louisville restaurants like Jasmine and Oriental House.

Coe’s account is chronological, and it begins in 1784 with a snapshot from history. The author’s point is simple, in that the ubiquity of Chinese food and dining in America during our contemporary era has been achieved only after the Chinese have traveled distances both physical and cultural, often far more arduous than those traversed by other arrivals.

When American maritime traders docking in Guangzhou first encountered China’s venerable and ancient cultural norms, they might as well have been encountering civilization on Mars. It likely would have seemed ludicrous to all involved at the time to so much as imagine any degree of future assimilation between East and West.

In particular, Americans (like most other westerners) found Chinese food and drink to be inedible, undrinkable and uniformly horrendous, although for the sake of commerce, they immediately commenced scouring the Pacific Rim for profitable foodstuffs like bird’s nests and sea cucumbers.

(Kindly note that sea cucumbers are not vegetables. They’re echinoderms, or bottom-feeding marine animals, with a texture and consistency not unlike escargot. At Oriental House, you can get them braised with shiitake mushrooms in a savory oyster sauce.)

In the early 1800s, a handful of missionaries engaged in the emerging search for Chinese souls reached the conclusion that supping with the natives might aid in their cause (in fact it didn’t) and their written accounts, while generally negative, at least introduced the topic to western eyes.

Chinese laborers began debarking in San Francisco during the Gold Rush. The culinary habits they brought with them never failed to inspire reactions, at best apathetic, though more often displaying a revulsion borne of racism, but gradually over time a process of adaptive evolution was triggered.

Over the next 50 years, a trickle of all things Chinese led to the establishment of minor footholds throughout America, finally migrating to the urbanized eastern seaboard in the late 1800s. Here, in immigrant-packed New York City, support came from an unexpected source: self-identified “Bohemians,” the hipsters of their time.

As social trendsetters, these “Bohemians” found Chinese food and dining to be sufficiently voguish for their aspirational flightiness, helping to foster the idea that Chinese restaurants were acceptable. Soon the city’s respectable middle-class salaried clerks were taking their girlfriends out to the Chop Suey house, and a brand new date night was born.

In turn, Chinese restaurateurs proved forever mutable, perfectly willing to adjust their recipes to American (read: overwhelmingly timid) tastes. Delightful incongruities ensued, as with the symbiotic affinities between immigrant Chinese and the Jewish diaspora, and an early example of “don’t ask, don’t tell” as it pertains to ingredients.

Beginning in the 1930s with Japan’s murderous attack on China, restrictions on Chinese immigration to the United States were relaxed. Japan became a shared enemy once America entered World War II, and afterward, even greater numbers of political exiles were welcomed during the coldest periods of the Maoist era.

By the 1950s, the Chinese restaurant menu (and its trademark cardboard carry-out boxes) had become almost iconic, with a stereotypical template of sorts. Egg Rolls, Chow Mein, Moo Shu Pork and Moo Goo Gai Pan were palatable and inexpensive. Many of these were Americanized variants of Cantonese recipes, though there might be a slightly spicier dish or two from Szechuan or Hunan. Fortune cookies were mandatory, and only the truly adventurous departed from knives and forks.

Chinese food was exotic, safe, kitschy — and the restaurants were open on holidays. Chinese restaurateurs represented the triumph of the free market at a time when the Red Communist hordes still seemed a genuine threat to the American way of robber baron capitalism.

Unsurprisingly, the modern era in Sino-American culinary relations began in 1972 with Richard Nixon’s seismic and epochal visit to the People’s Republic of China.

Coe extensively documents the transformative phenomenon of Nixon in China. There were secret pre-trip missions and top-level planning sessions. Forever savvy, Tricky Dicky let his prospective hosts know that he’d eat anything they placed before him – and with Mrs. Nixon, he undertook to learn the rudiments of chopsticks.

The Chinese gracefully spared their guests the most exotic extremes of the Chinese diet, as summarized by the proverb: “Anything that walks, swims, crawls, or flies with its back to heaven is edible.”

But just in case, when Air Force One landed in Beijing, it came fully provisioned with steak, eggs, potatoes, plenty of standard-issue western booze and Nixon’s private chef.

At the time, the mere sight of an American president on television using chopsticks in the banquet hall of the enemy was the stuff of bedazzled fascination. The tentative political rapprochement was meant to put the Soviet Union on notice, but the practical cultural effect was a mainstreaming of heretofore mysterious China in American eyes, and a renewed interest in Chinese food.

By the time the USSR crumbled, China was on its way to becoming a global economic powerhouse. Today there are more than 40,000 Chinese eateries in America, perhaps 80 of which are doing business in metropolitan Louisville. Our melting pot predictably transformed their hot pot into “La Choy makes Chinese food swing American” (yes, the product as yet exists), but now the pendulum is beginning to swing back.

At establishments like Jasmine (Szechuan cuisine) and Oriental House (Cantonese, including a large selection of Dim Sum), the standard issue Americanized dishes are served to the cash register’s steady hum, but their “authentic” Chinese menus are written in English and filled with regional specialties that make it possible to explore examples of deliciousness ranging beyond General Tso’s comforting chicken.

No longer must intrepid foodies reconnoiter the kitchen to point and eat. I came to Coe’s book late, but it’s invaluable for those who like to think about what they’re eating and drinking.