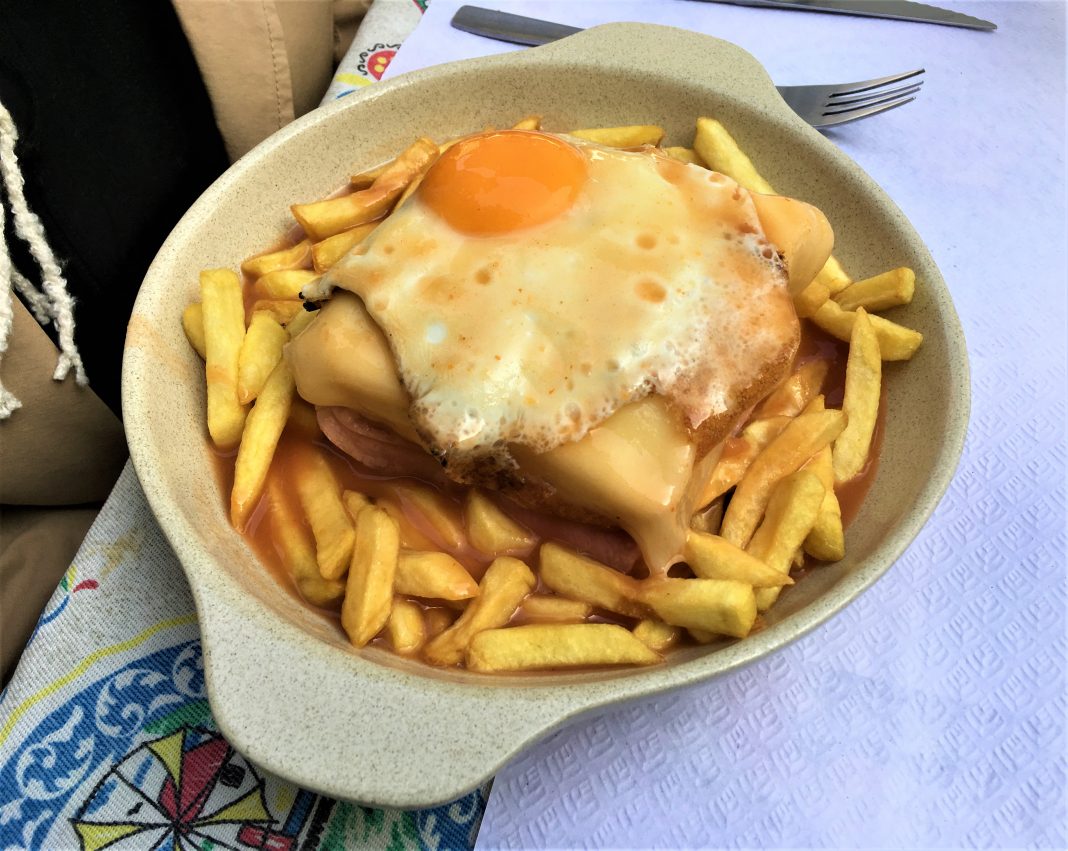 The particular example of a francesinha sandwich chosen as today’s “Edibles & Potables” cover photo was the most humble of many that I consumed in Porto, Portugal two years ago, but no less delicious. Can someone locally please make a house specialty out of this?

Porto’s francesinha sandwich is a gut buster, by Kevin Gould (The Guardian)

Anyone aiming to polish off even half of one of these needs to be pretty forceful, for this little Frenchie is a tower of power. A doorstep sandwich layered with pork, then smoked sausage, then bacon, and topped off with a medium-rare beefsteak, it is finished with a fried egg and covered in a thick coat of cheesy sauce. It is heated through and then drenched in a murky dark sauce. A mountain of french fries is served on the side. Health food it’s not.

Continuing this riff on the general notion of a sandwich, there is a new biography of James Beard: “The Man Who Ate Too Much,” by John Birdsall.

The Evolution of the Onion Sandwich, by Tejal Rao (New York Times)

There was more to the famous onion sandwich, too, which served as a kind of blueprint for Beard’s approach to American cuisine. “It’s a recipe where charm and originality come from taking a traditional dish and swapping out its signifiers with ones that seem new,” Birdsall writes. And if Beard didn’t invent it, then he understood that power. The sandwich started as a bundle of flavors — a Central European-style bite of raw onion on schmaltz-licked dark bread. But it became two slices of rich brioche, cut into circles and spread with mayonnaise, with thinly shaved onion firmly pressed inside and a rim of chopped parsley. It was basic but confident, and it came together with inexpensive ingredients. It was so good that you could easily eat a dozen, and so simple that it barely required a recipe.

It will come as a surprise to no one that The Bean Institute is a thing. At 1843 Magazine (from The Economist), Josie Delap takes a deep dive into leguminous geopolitics.

Why the baked bean divides America and Britain

Many countries have a favoured bean stew. In Mexico frijoles borrachos are simmered with bacon and garlic and onions. Ewa riro are a speciality of the Yoruba part of Nigeria. In France a cassoulet may contain a rich variety of meats but it is at heart still a bowl of stewed beans. For the dish known specifically as baked beans, you must turn to America and Britain. They are two countries, divided by a common bean.

Remaining stateside, an archaeological dig at a former slave cabin in Maryland yielded a kitchen midden, or garbage pit, which provides evidence of life (and food) before and after emancipation.

A Historical Dig Sheds Light on the Food of the Underground Railroad, by Reina Gattuso (Gastro Obscura)

The bones paint a picture of resourceful people using creativity to survive. Archaeologists found the bones of domestic animals, including pig, cow, chicken, and sheep or goat, but they also found fish and crab from the nearby Choptank River, and game such as rabbit, turtle, duck, goose, turkey, pigeon, woodpecker, possum, raccoon, skunk, deer, and muskrat. (Muskrat, which Harriet Tubman herself was said to hunt, remains a Dorchester County delicacy to this day). The cuts of meat and variety of game indicate that the residents lived in poverty and consistently scrambled to supplement their diets with whatever they could find.

Pearson points to this article by Heather Haddon at the Wall Street Journal: “McDonald’s, Chipotle and Domino’s Are Booming During Coronavirus While Your Neighborhood Restaurant Struggles,” subtitled, “A health crisis is creating a divide in the restaurant world. Big, well-capitalized chains are thriving while small independents struggle to keep their kitchens open.”

This week’s Thu-Sat cooler weather has shown that Hoosiers aren’t going to sit and eat outside in large numbers with temperatures at 50 degrees F or less. Big surprise. Haven’t seen the same level of online or carryout ordering we had in April-May since, well April-May. Limited dine in can pay a few bills, but ALL of your favorite locals need MORE support with Online and Carry Out food and beverage to survive this WINTER. We have outdoor gas fired heaters getting installed next week, but we really don’t know if they will draw more happy customers. Please try to buy more local every chance you get, even if it means passing up drive through convenience to help a local business that needs your $ a lot more than a thriving national or regional chain. Thank you from the Daredevil Family and our industry friends that we happily support every day.