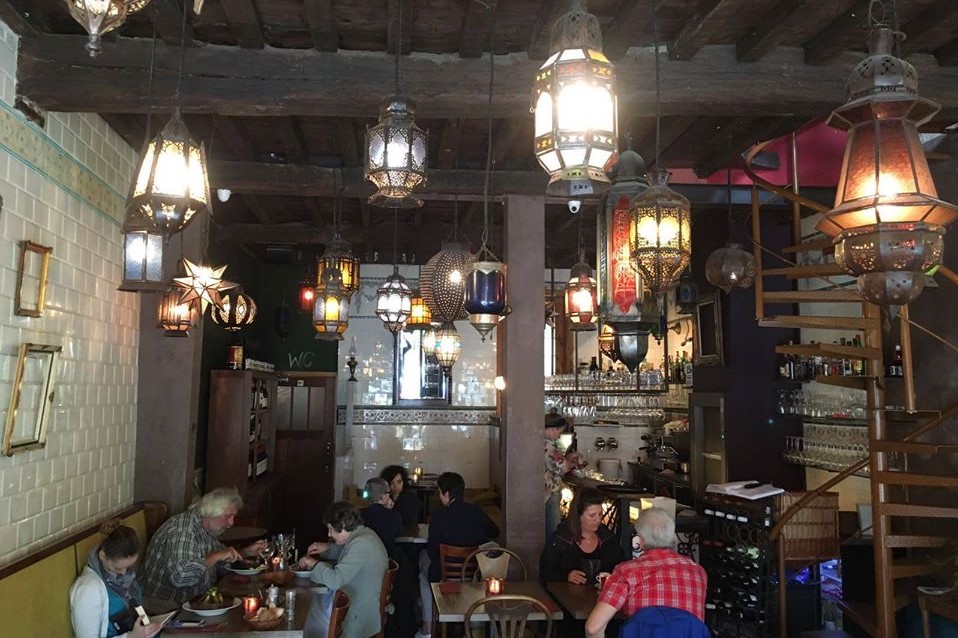 “Edibles & Potables” is a place for peering past the periphery to items of interest outside our customary metro Louisville coverage area. Today, potpourri.

Earlier in the year, in desperate need of pretending I was elsewhere, a 1980s-vintage recipe for North African tagine with couscous did the trick with the help of a bottle of Malbec from Chile. Providentially, an as-yet unopened jar of Mina Harissa sauce (available locally) had been among the Christmas gifts, and since then I’ve used the remainder of it to accent an esoteric selection of nibbles, from pickled herring to steak to pizza. Corn flakes are next.

Harissa Is the Spicy Sauce That Will Liven Up Any Dish, by Chris Malloy (Real Simple)

The chile pepper has found its way into so many dishes, sauces, and specialties. In North Africa, especially in Tunisia and Algeria, red chiles often become harissa, an everyday condiment used widely in this part of the world. If you’re a fan of heat or layered flavor, harissa should be on your radar and in your fridge. Here’s why.

Compared to your average big-brand hot sauce, harissa brings another dimension. Like hot sauce, the focus and main ingredient is chiles. But harissa combines chiles with added spices. Cumin, caraway seeds, and coriander are some common additions. The precise makeup of the added spicing varies from place to place. But in any true harissa, these spices create a duskier, bolder pepper condiment.

Ranging to Central Europe, one of my COVID-period resolutions was to master the art of the pierogi. It hasn’t happened yet, but the pandemic is young.

Pierogi: a Polish comfort food (1843 from The Economist)

How pierogi appeared in Poland is not quite so clear. Most eastern-European countries have their own iteration of the dish, also known as varenyky (Ukraine and Russia), pelmini (Russia) and kolduni (Lithuania). In Poland, the first written trace of pierogi appears in a 17th-century recipe book, but food historians disagree over whether they were brought from China through Italy during Marco Polo’s expeditions, or whether the marauding Tartars brought the recipe over from the Russian Empire. Another theory pinpoints their arrival to 1238, when Hyacinth, later anointed the patron saint of pierogi, ended a famine ravaging a Polish hill-town by asking the hungry hordes to pray. As the hail-ravaged crops began to grow again, he was thanked with a steaming plate full of those golden half-moons of stuffed dough.

Street food is beguiling almost anywhere one chooses to travel, and in this brief survey of global street food the author suggests that “you should be able to find at least some of (these items) in restaurants in your hometown.” However, I’m unaware that we have a Laotian restaurant in Louisville, and I haven’t enjoyed cuisine from Laos since our last visit to the Hmong neighborhood in Minneapolis a few years back. Have I missed an eatery in Louisville?

(Food in Laos features) ingredients like riverweed from the Mekong, water buffalo, and four types of eggplant only grown there. Outside of Laos, you’ll still find unique flavors and textures. Look for laab (stirfry) and sausages, as well as anything with jeow bong. Jeow bong is a chili paste that makes any dish taste completely Lao.

If you haven’t taken a look at Cuisine Noir, consider visiting the web site and browsing. Reading this article, I couldn’t help my mind wandering to the fourth critical aspect of New Orleans: joy, art and music and FOOD.

Blinged-out umbrellas, giant crawfish, a sequined gator, and a virtual costume closet—these are just a few of the unexpected, interactive exhibits guests will soon be able to explore at JAMNOLA™, New Orleans’ first experiential pop-up that takes audiences of all ages on a topsy-turvy stroll through the cultural gems that make the city so special. New Orleans is arguably the city in the U.S. most associated with joy, art and music, which was the catalyst for two local residents to team up with Where Y’Art to create their love letter to New Orleans: JAMNOLA (Joy-Art-Music New Orleans).

Our publisher pointed to this article, which almost surely anticipates valuable seals of approval to come.

Look for This Important New Sign When Dining at a Restaurant, by Kiersten Hickman (Eat This, Not That!)

How do you know if a restaurant is safe and properly taking all the right precautions during the pandemic? While we would like to assume that every eating establishment is following all the right steps to keep customers and employees safe, there isn’t a signed guarantee that customers can truly count on. This is why the National Restaurant Association (NRA) has developed a ServSafe commitment that can ensure the safety of others.

The NRA plans on launching a program that will market restaurants that are following all the right safety precautions required by the NRA. This commitment for restaurants shows customers their favorite eateries are being safe so they can feel at ease dining in (or taking out) from their favorite spots.

We close with a tale of troublesome emus Down Under. The nagging question left unanswered: Were the emus wearing the requisite face coverings?

An emu walked into a bar – and was not welcomed in. In an amusing story that has become a viral hit on social media, an Australian pub has banned two local emus from entering the establishment – citing their “bad behaviour”.

The Yaraka Hotel in situated in a tiny town of the same name in Central Queensland. According to Nine News, the town has an official population of just 12 people, and all the residents share a certain fondness for the two large, flightless birds that have become its unofficial mascots.

Photo credit: Ronda Moroccan Restaurant, a favorite of ours in Mechelen, Belgium