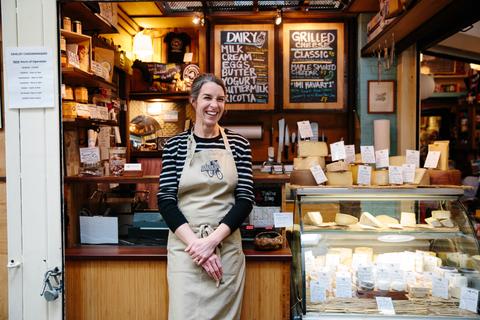 Long ago and far away at the 1990s-era Rich O’s Public House, a customer of mine named Bill was the only other person I knew who subscribed to The Economist. Bill eventually moved away, and I no longer own the business, but my subscription is intact.

The two of us took particular interest in the venerable British news magazine’s weekly obituary, a concluding page-length celebration of lives great and small, which has always been writing of the highest order, and remains the first article I read when a new issue arrives.

As such, here is the opening section of The Economist’s tribute to a departed cheesemonger: Anne Saxelby was a champion of artisan farmers and their wares.

European visitors to America, that land of infinite variety, have often been struck by strange instances of sameness. Why, for example, are all pencils yellow, with a pink eraser at the end? Why do so many local newspapers have the same antique masthead? And why, until 2003, were all dollar notes the same size and colour, whatever the denomination? Few things have surprised them more, almost into the present century, than the sameness of cheese. From sea to shining sea, America has traditionally offered six. Industrial milky mozzarella, as on pizza; blue cheese, usually as sauce in a plastic bottle; Swiss, a block of pale, thin, rubbery slices, tasting of nothing; Monterey Jack, a pale attempt at Cheddar; inoffensive cream cheese; and then, in orange glory, processed cheese, liquid or semi-solid, to melt onto burgers or to drown nachos in.

Anne Saxelby was brought up, in Chicago, with all that schlock. Kraft singles were the default in her house, and “fancy cheese” was white American, sliced to order, from the supermarket deli. But she became so fascinated by the possibilities of cheese in America that in 2006 she opened, in Essex Market on New York’s Lower East Side, a tiny stall that sold cheese made only on farms in America’s north-east. It was the first anywhere, and within a few years, even as supermarkets gradually upped their game, she was the most famous cheesemonger in town. By 2020 hundreds of restaurants had regular orders and close to 50 farms, half of them less than two decades old, supplied her. She was not only educating New Yorkers, but helping to save her farming friends, their herds, and a whole sustainable way of life in the green hills of New England.

From the very beginning, Anne used her platform to advocate for pretty much everyone who crossed her path—lobbying the city for better conditions for Essex Market vendors, as well as championing the sustainable, family-owned dairy farms from which she sourced her cheeses. As Saxelby’s reputation grew throughout the nation, Anne herself became a leading advocate for regenerative agriculture, combating misinformation about dairy production and misleading tropes about cheese being “unhealthy.”

And, from the Saxelby Cheesemongers web site, Remembering Anne Saxelby.

We are continually humbled by the showing of love and support we receive from our community of cheesemakers and cheese lovers daily. For those wishing to honor Anne’s legacy, please consider donating to the Anne Saxelby Legacy Fund established by family and friends to Anne. We’d like to thank Slow Food USA for setting up the fund, which will provide opportunities for financially distressed teenagers and young adults to apprentice in sustainable food systems and agriculture, domestically and abroad, just as Anne did.