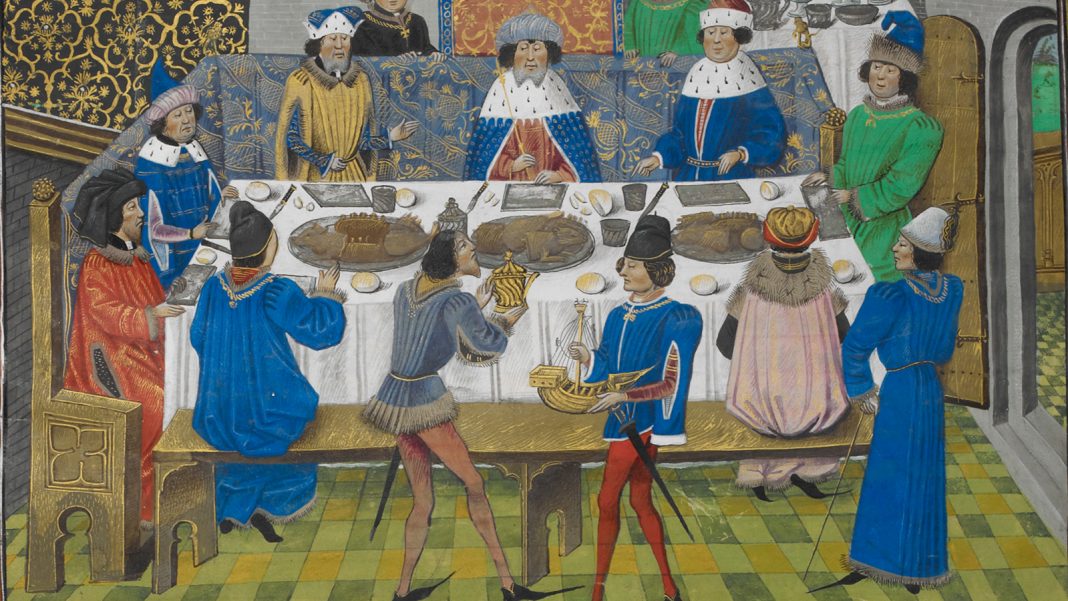 The medieval period of European history — the Middle Ages, or the Dark Ages — encompassed 1,000 years between the fall of the Roman Empire and the arrival of the Renaissance — approximately 500 to 1500 A.D. The 15th century saw the beginning of the Age of Exploration, as wooden ships fanned out from Europe and reached the most isolated places on the globe, returning with items never before seen, as well as establishing the basis for subsequent (and exploitative) colonialism.

Which is to say, the medieval diet did not include dishes like Au Gratin Potatoes, Spaghetti Bolognese or Bananas Foster.

In short, a process akin to globalization began long before the invention of jet planes and the internet, although the dynamism was far less pervasive during the Middle Ages.

The selection of vegetables in medieval Europe was relatively small, to begin with. It would not have included plants native to North or South America, which means no potatoes, no corn, no tomatoes, no avocados, no peppers, and no beans (with the exception of fava beans). Spinach came from Persia, via Arab conquests of southern Europe, in the 800s, and gradually replaced other greens, like sorrel. Sugar first reached Europe in 1148, when Crusaders brought it back from their war, but it was a luxury product, with limited availability, for centuries. Coffee didn’t come regularly until the 17th century.

The preceding passage appears in an article written by Sarah Laskow for Atlas Obscura: I Tried a Medieval Diet, And I Didn’t Even Get That Drunk. Apart from coffee, which she couldn’t to without (don’t we all know it), Laskow resolved to observe the principles of the medieval diet for a few days according to the precepts of the Regimen Sanitatis Salernitanum, “created, allegedly, by famous doctors for English royalty and disseminated in the form of a poem.”

The Salerno health regimen was based in the humoral theory of medicine, which is focused on keeping balance among the body’s four humours—blood, phlegm, yellow bile and black bile. Foods were thought to possess qualities that could help maintain that balance: each hot or cool, dry or moist. These ideas originated in the ancient Mediterranean world, most prominently with the Greek physician Galen, and were passed to doctors in the Arab world, before returning to Europe.

Although medieval doctors legitimized their recommendations with these ideas about how the body worked, their medical advice wasn’t as random as it might seem. “They justified their practice by humours, but they had arrived at these ideas by trial and error,” says Noga Arikha, the author of Passions and Tempers, a history of the humours. These doctors had one major disadvantage compared with modern doctors—they didn’t know about germs, so they didn’t know what caused sickness. But their ideas about how to keep healthy, particularly by controlling a person’s diet, weren’t so different from our ideas today. “The idea of balancing out—that remains and it makes complete sense,” says Arikha.

As for the quality of the food consumed in medieval times, it has always bothered me that we incorrectly explain the advent of the spice trade to a need for Europeans to alter food grown rancid prior to modern refrigeration. Actually these spices, while certainly useful in the kitchen, were early examples of consumerism with religious overtones; specifically, conspicuous consumption of luxury items, coupled with a tendency to think of the places where spices originated as a literal paradise on earth. A very informative article at The Epicentre charts this phenomenon:

Historians have tried to explain this powerful medieval appetite for spices by pointing to the prevalence of inadequate food-preserving techniques. Pepper together with salt, it was said, was the chief means of preservation, of keeping the meat of cattle, slaughtered in the fall, edible throughout the winter. The other spices, according the this explanation, served to make spoiled meat edible again. This is hardly convincing, for spices imported from the Orient were among the most precious substances known in the Middle Ages. That is why they were the prerogative of the upper classes. To limit their function to food preservation and explain their use solely in these terms would be like calling champagne a good thirst quencher.

And, in closing, as it pertains to medieval food’s freshness …

We tend to believe that just because they didn’t have electricity for refrigerators their food had be rotten. But, in fact, their diet was probably fresher and more vitamin-rich than ours. Food was grown locally, often right outside the kitchen, and it was eaten the day that it was picked. Animals were not slaughtered until needed for a meal, so the meat didn’t have time to turn rancid. Fish were kept alive in vats until they were cooked. If meat needed to be stored, it was smoked, dried, or cured to prevent decay. Iceboxes and cold rooms were used in period to store the few items that needed to be kept cold. Ice was harvested in winter and kept in cellars packed in straw until needed. The iceboxes were made of stone and were quite efficient. Cold rooms were designed to keep butter, cheese, and barrels of fruit sweet for months.

Food for thought on a Sunday. Today’s cover photo credit: the British Library.