Home FOOD Edibles & Potables: We got the beets (again) because it’s time for... 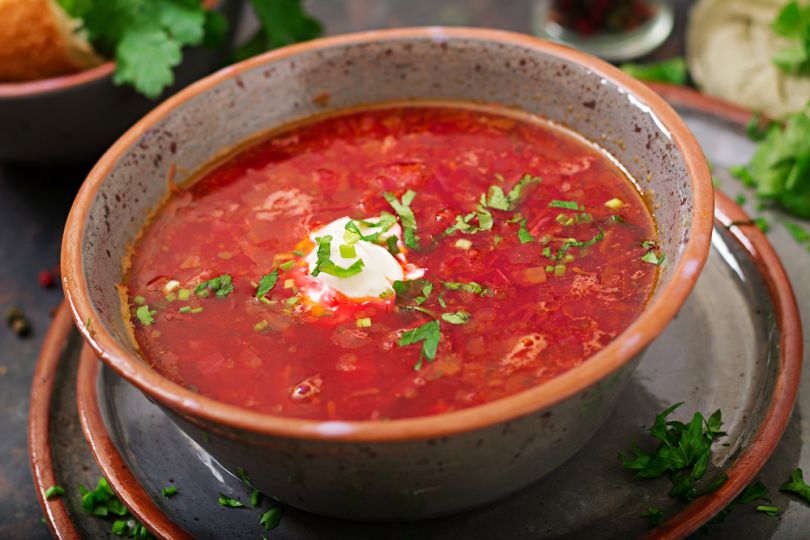 Edibles & Potables: We got the beets—raw, pickled, roasted, or stewed

Yes, I know; this beet obsession just might be getting to me.

Two weeks ago, during a literature-inspired beet digression, it was my original aim to include borsch (or borscht). The opportunity somehow slipped past, but then I saw this important article: Ukrainian borscht recognised by Unesco with entry on to safeguarding list, by Ashifa Kassam (The Guardian)

The UN’s cultural body has added the cooking of Ukrainian borscht to its list of endangered cultural traditions, accepting Ukraine’s petition to fast-track its application following the invasion by neighbouring Russia.

Ukrainian borscht-making “was today inscribed on Unesco’s list of intangible cultural heritage in need of urgent safeguarding”, Unesco said in a statement on Friday.

“Whether as part of a wedding meal, the focus of food-related competitions or as a driver of tourism, borscht is considered part of the fabric of Ukrainian society, cultural heritage, identity and tradition,” it added.

In retrospect, this 2019 account of the borsch wars isn’t as lighthearted as it might first appear, reminding us that the Russian Federation annexed Crimea all the way back in 2014.

Borsch (борщ in Cyrillic) is a hearty soup, usually coloured red from beetroot (though green and white varieties of the soup exist), and for centuries, it has been a daily staple in the Ukrainian kitchen. For many, Russia’s claim on such a quintessentially Ukrainian dish embodies a much larger trend of Russia’s historical oppression of Ukrainian language, politics, and, above all, independence.

According to Alex Kokcharov, a London-based political and economic risk analyst of Belarusian descent, the Russian Foreign Ministry’s chest-beating around “Russian” borsch is, “another attempt at cultural appropriation by Moscow”. He explained that while “a number of cultures claim borsch to be theirs – Ukraine, Belarus, Poland and Russia – Ukraine has the strongest claim for the dish.”

After my first visit to the Soviet Union in 1985, I found a Russian cookbook at the public library. The author’s name escapes me, but I recall her saying that in spite of a career spent as a cooking columnist in the USSR, it wasn’t possible to actually prepare many of the recipes until she came to America, seeing as the ingredients were seldom available even in Moscow.

In my recollection, the cookbook’s author had several recipes for borsch, identified as Russian or Ukrainian, and the latter invariably was the heartier of the versions, almost a beet-heavy stew packed with vegetables. Here’s a glimpse at just a few of the many ways Ukrainians prepare borsch.

How to Cook The Best Ever Ukrainian Borscht: Top 5 Recipes (Destinations UA; also the source of today’s cover photo)

Borscht is often considered the pillar of Ukrainian cuisine and definitely is the most famous dish served in every corner of the country. Many Ukrainians argue that the iconic soup should only be homemade. That’s why we picked 5 recipes you can try at home to cook the best Ukrainian borscht ever – it’s easier than it seems.

Last year was my belated introduction to UNESCO’s List of Intangible Cultural Heritage as it pertains to cooking, food and dining. It makes more interesting reading, not to mention appetite development.