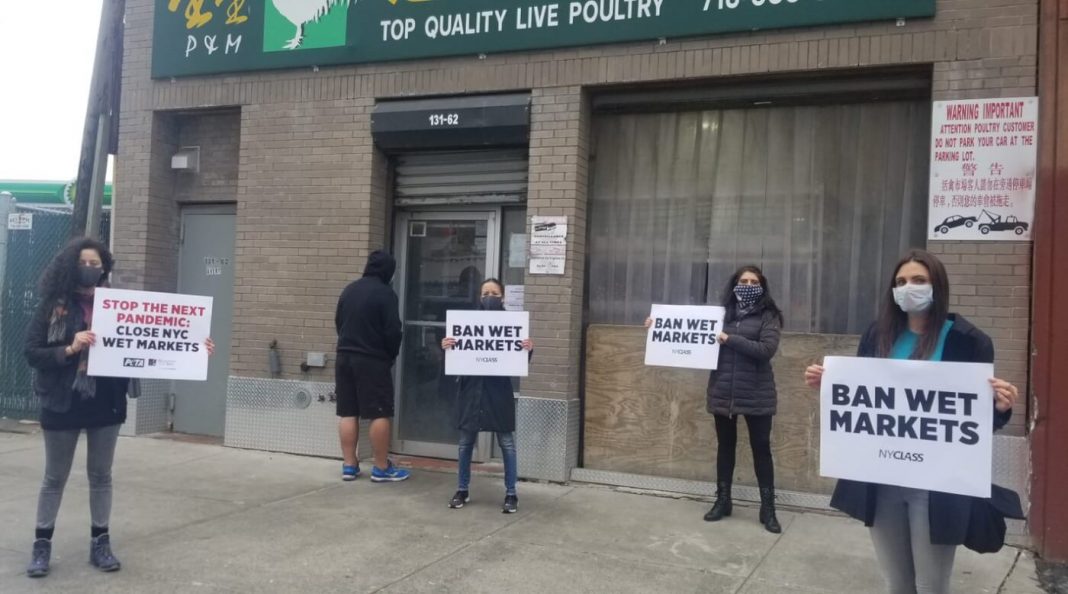 The scene resembled a kind of farm-to-table fantasy: the owner of a family business, delivering food and organic waste to customers he knew personally, providing a functioning, affordable alternative to the industrial meat system. Except in this case the participants weren’t virtuous middle-class shoppers, but working immigrants – “the fabric of New York.”

On Sunday we glance at “edible and potable” food and drink news items that exist outside of the Food & Dining Magazine coverage area. “Wet markets” that slaughter live animals are not common hereabouts, although owing to our proximity to surrounding farms and pastureland, we’re never very far away from a slaughterhouse — yes, pork, but did you know that Kentucky “produces more cattle than any other (state) east of the Mississippi River”?

We turn to The Guardian to sketch the topic at hand. Like so many other considerations in the year 2020, it comes to us courtesy of COVID-19.

‘People fear what they don’t know’: the battle over ‘wet’ markets, a vital part of culinary culture, Kimon de Greef

… Some so-called “wet markets” in Asia, named for the common practice of hosing them down with water, stock exotic wildlife alongside live animals, providing a potential nexus for diseases to spread. This has led to growing calls around the world to ban them, even though the precise history of the coronavirus pandemic, widely thought to have originated at a seafood market in Wuhan, is still unclear.

But the term “wet markets” has become confusing in the process, mixing up wildlife consumption with less exotic traditions, such as the poultry markets of New York. This has led to a situation where, in the rush to create a safer food system, culturally significant food practices, which pose comparatively minor public health risks, are coming under threat.

It isn’t difficult to see the forces poised to clash in this arena: animal rights groups, radicalized carnivores, locally sustainable livestock purveyors, industrial scale slaughterhouses, defenders of cultural and religious tradition, public health advocates and epidemiologists. In terms of ancillaries, the ever-nourishing debate about immigration is involved, too.

In New York, People for the Ethical Treatment of Animals (PETA; cover photo credit) is petitioning officials to close “blood-soaked slaughterhouses” and linking them to “wet markets” in its promotional campaign.

According to de Greef, “PETA has also urged the World Health Organization (WHO) to denounce live animal markets globally. The WHO has resisted these demands, saying that live markets provide food and jobs for millions of people.”

Of course, “live” or “wet” markets have been the norm throughout human history, which the writer explains.

Live markets were a fundamental facet of New York’s culinary landscape until the rise of refrigeration in the 20th century. Modern supply chains physically distanced consumers from producers, increasingly shielding them from what the American food writer Michael Pollan has called “the shame of killing”. For this and other reasons, such as urbanization and rising incomes, meat consumption increased massively. At the same time, the harms of meat production multiplied, from toxic runoff at feedlots to the slaughterhouses that have emerged as Covid-19 hotspots, predominantly for low-paid immigrants and people of color.

In short, “physically distanced” consumers and factory slaughterhouses operated by powerful corporations constitute a supply chain that’s out of sight and out of mind, focusing disproportionate attention on those family businesses mentioned in the opening paragraph, especially when the owners are Muslim, Asian or both.

Interestingly, while “wet markets” as such are not an (obvious?) feature of life in Louisville, Muslim culinary requirements are being honored at one regional slaughterhouse.

Brewer Livestock in North Vernon, Indiana (roughly 50 miles from Louisville) is a USDA-inspected meat processor and a certified Halal plant, and as such its product offerings range from the familiar (chicken, lamb, beef) to the slightly offbeat (goat, whole sheep and camel knuckles). Our favored pork? Not for a Halal specialist; those cultural and religious differences again.

There may be other Halal producers nearby, and if so, drop us a line and this story will be updated. There is no conclusion today, however. It’s far too soon for that, especially given the ongoing pandemic.