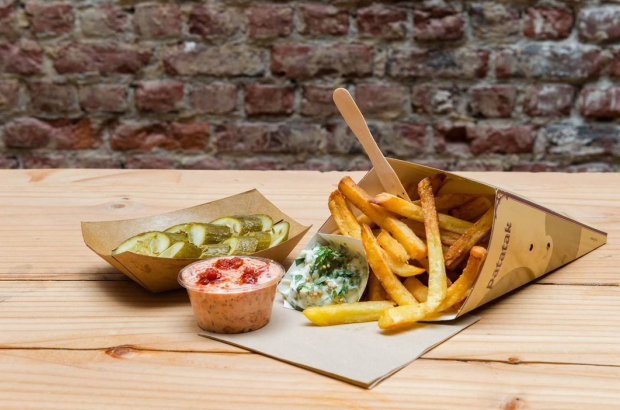 A friture, baraque à frites or friterie (pronounced [fʁitʁi]) in French-speaking Belgium and Northern France, or frituur or frietkot in Flanders and the Netherlands, also fritkot in French-speaking Belgium and friture or frietkraam in the Netherlands, is a traditional restaurant, kiosk or van serving quick-service fast food, particularly fries from which they derive their name.
— Wikipedia

In the time it takes to explain the many ways one refers to places where French fries are sold, a whole cone of them could have been devoured – except the fried potatoes are really Belgian, right?

Prompting a hungry digital editor’s mental meanderings on a pre-Christmas Sunday morning is an article by Richard Harris in The Bulletin, an excellent English language publication that chronicles the life and times of Belgium.

Patatak opens in central Brussels, showing how Belgian fries should be done

Anyone who wants to fully understand why Belgian fries are so celebrated should give Patatak a try – a chip shop with an original year-old location on the Parvis in Saint-Gilles and a brand new location downtown next to Cirio by the Bourse.

“I wanted to open a real frietkot, locally sourced, with everything homemade,” owner Adrien Dewez told The Bulletin.

“A frietkot is somewhere where everybody should be welcome – no matter the money they have at the end of the month, no matter what they want to eat, so we try to have the quality of the past and we try to innovate and look forward to the future.”

Those who’ve traveled in Belgium will recall those big cones filled with hot fries, commonly topped with the traditional mayo, although most vendors have long since offered a variety of sauces on a Baskins-Robbins scale.

It’s all seemingly very Belgian, so much so that some in the small country have sought UNESCO heritage status for Belgian fries and mayo. Still, we may never know who actually invented the “French” fry, a question considered in depth by Emily Monaco at the BBC in 2018: Can Belgium claim ownership of the French fry?

From the New World potato’s inauspicious arrival in Old Europe during the early 1700s, to street food in Paris, poutine in Canada, and super-sizing, American-style, the story of French fries returns to Belgium.

In a world where fries are often relegated to a mere side dish for burgers, steak or fish, or a base for gravy and cheese, it’s only in Belgium that fries truly are a meal unto themselves: traditionally made from the Dutch Bintje potato, these fries are always double-fried in beef tallow (never oil), piled into a paper cone with a touch of mayonnaise, and purchased from frietkot, or simple mobile fry stalls.

My personal favorite memory about fries in Belgium dates to 2000, when five of us gathered for “beercycling” in Tournai, Poperinge and Brugge (Bruges). We parked the bicycles for a short excursion by rail from Brugge to Ghent, and a tour of the Huyghe brewery, where Delirium Tremens beer is produced.

Read all about it here, but first, today’s cover photo credit: Patatak.

Edibles & Potables: A famous journey to Delirium Tremens in Belgium