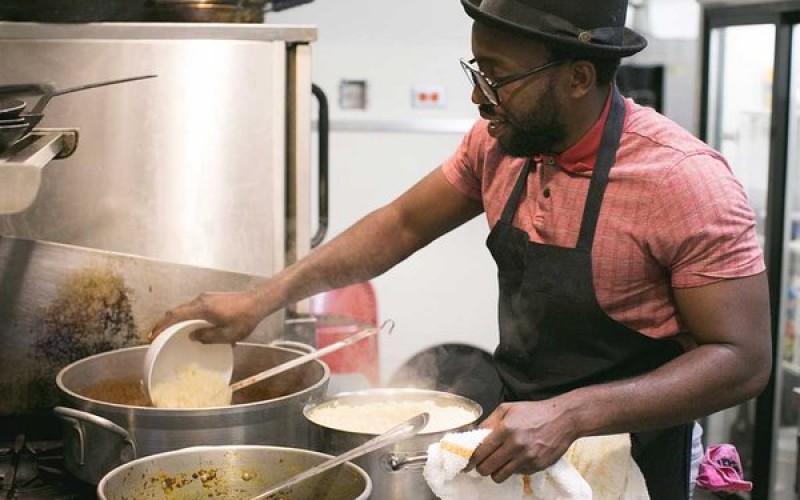 Tunde Wey, a Nigerian immigrant, chef, activist and writer will be the guest  chef of Edward Lee at a  Lagos Dinner at Chef Space, 1812 W. Muhammad Ali Blvd., at 6:30 p.m. Thursday, Sept. 8.

According to a story in the Courier-Journal, Lee has been an admirer of Wey for some time, as  both a chef and as a commentator on American food culture. Lee is sponsoring the events, as a personal project.

The Lagos dinner is a family style event. The menu will include dodo with ayamase (a spicy stew), eba and okra soup (made with casssava flour), jollof rice and chicken. The cost is $25; all beverages are additional. Lee hopes the dinner conversation will include issues of blackness in Louisville.

“It’s not going to be a big political debate,” Lee was quoted in the C-J story. “Tunde is perfect to facilitate. It’s not about him being black; it’s having this incredible story to tell. He’s traveled the country,  seeing it from an immigrant’s point of view. Let’s hear from a guy who’s an immigrant, who’s black, who’s a chef. He gets to tell his story.”

Friday, Sept 9, Wey and Lee will collaborate on a dinner at 610 Magnolia’s Wine Studio, where the two chefs will draw upon their heritages and present dishes from Nigeria and South Korea. Again, Lee hopes the dinner will encourage conversation about the diversity of America, its problems and its promises.