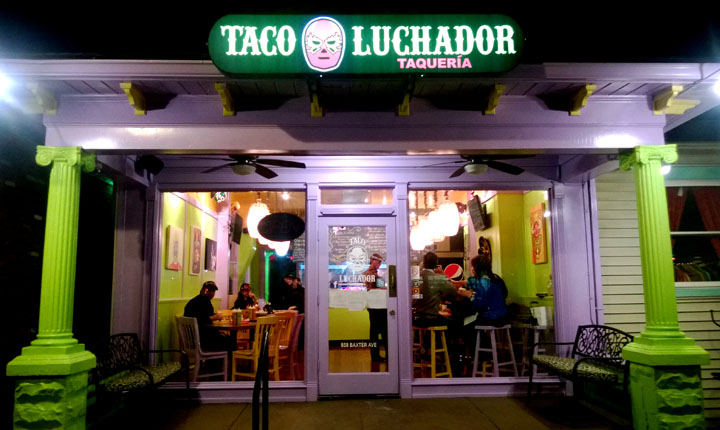 The shifts and changes downtown seem to be neverending, but here’s a new one to taco ’bout. Zoë’s Kitchen, 500 W. Jefferson St. – at the corner of West Jefferson and South Fifth St. – is out, but El Taco Luchador is moving in. The taqueria that has been named the most popular taco spot in the state by BuzzFeed & Yelp and recognized in Southern Living’s “City Guide to Louisville”,  will be opening sometime in late summer or early fall, according to Chef Fernando Martinez’s Olé Hospitality Group.

The group opened the first El Taco Luchador in 2013 at 938 Baxter Avenue and followed up in July of 2017 with the second location in St. Matthews at 112 Meridian Avenue.
“We’ve been looking for a great spot downtown, and we finally found the right match,” said Chef Martinez. “We’re making some updates to give it the personality of the other locations. It will be our largest taqueria yet at 2300 square feet. We’re going to be walkable from the Bourbon District, the Yum! Center and of course the new renovated convention center that is set to open soon. There’s so much great momentum.”
The restaurants are known for their brightly painted walls adorned with colorful signature masks of “Luchadores,” the famed wrestler-entertainers of Mexico. El Taco Luchador serves over ten different fresh, cooked-to-order tacos along with Mexican sandwiches called “tortas” as well as salads and signature sides like “Elote Callejeros,” grilled corn on the cob with mayo, cotija cheese and chile pequin and desserts like homemade churros.
The group is still working on an expansion of its original location at 938 Baxter Ave and the opening of a new El Taco Luchador at Stonybrook Village Center at 9204 Taylorsville Rd. in Jeffersontown.