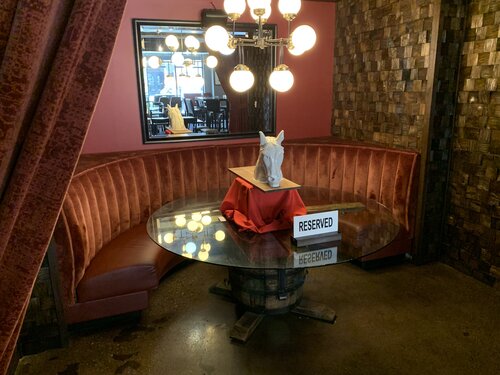 It’s never too late to learn, even on December 31, so here’s an excellent article about the efforts of Shirley Mae Beard (Shirley Mae’s Cafe and Bar) to commemorate the Kentucky Derby’s Black jockeys.

As if running a restaurant and a juke joint weren’t enough to keep her busy, Shirley Mae Beard founded the Salute to the Black Jockeys Who Pioneered the Kentucky Derby event in May 1989. (The name was later shortened to Salute to Black Jockeys, Inc.)

A restaurant and entertainment venue in Downtown Louisville will rebrand to a new name with historical ties in the new year. Encore on 4th, located 630 S. Fourth St., will soon become The Black Jockey Lounge, a high-end eatery that celebrates the history of Black jockeys. Tawana Bain, who has owned Encore since 2018, said while the name change has been in the works for a while, the inspiration didn’t strike until recently.

Bain provides the takeaway for today.

“We now have this historical site where people can learn about the Black jockey, but we also serve as a site during a historic moment. I feel like there’s something here that the community and those outside of the community can embrace when they come in — not only can they learn about the history, but they can also visit a site that’s served history well during a very tough time in our community.”

She hopes to have the retrofit up and running by Valentine’s Day, 2021, contingent on COVID.