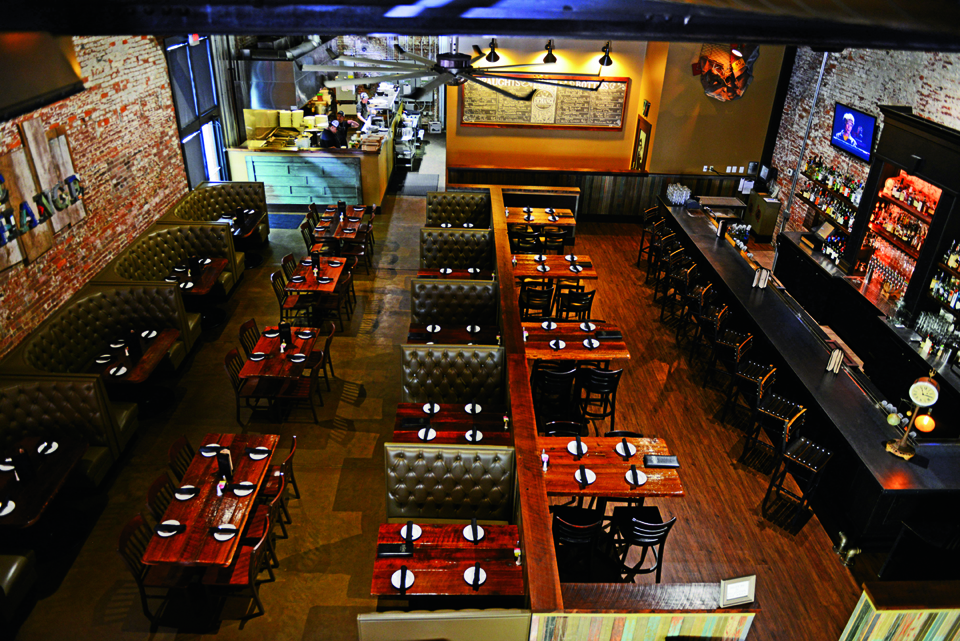 With the Exchange Pub + Kitchen, Ian Hall has taken a historic New Albany building and transformed it into a stylish restaurant that would fit right into SoHo. With the Exchange as an anchor, the future looks bright for New Albany’s once-sputtering downtown revival.

Ten years ago, New Albany native Ian Hall — then in his late 20s and already a 10-year veteran of the restaurant business — made a vow to himself. “If I’m going to be in this business, by the time I’m 30 I’m gonna own my own place,” he remembers deciding.

It might not have been the most prudent decision. But then, Hall is a risk-taker. In the past 10 years, he has added the following items to his resume: opened a bar that seemed like a good idea at the time; staved off impending financial ruin; engineered a desperate relaunch, from failing bar to strip-mall gastropub; seen his floundering fortunes reversed with one good newspaper review; bought a ramshackle historic building he describes as “four walls and half a roof”; launched his own restaurant design company to restore, repurpose, and remodel the building into a 200-seat restaurant; and — with the help of executive chef Robert Temple — turned it into one of New Albany’s leading dining spots.

And he’s not done yet. Now that the Exchange Pub + Kitchen has gotten its feet solidly underneath it, he’s opening a Comfy Cow franchise just in time for ice-cream season.
Clearly, Ian Hall is building up momentum. 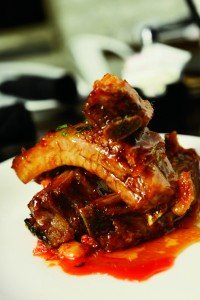 At 37, Hall looks a bit like an overgrown kid, tall and thin, clad in sneakers and skinny jeans, and sporting a short spiky ‘do that stands up in front. He’s a talker and an enthusiast. The list of things he loves includes the following: New Albany, the restaurant biz, interior design, repurposing architectural materials, and striking up partnerships with local purveyors. For the past year and a half, he’s brought all those passions together in the building he lovingly restored at 118 West Main.

When Hall says he’s passionate about the restaurant business, he’s not just talking about food and beverage. Ask him about the building, and you might find yourself getting a high-energy tour in which Hall points out everything from the salvaged original transoms (now serving as entryway décor) to the tabletops made from repurposed original floor joists.

“I’m kind of a restaurant geek,” he admits. He cites the various design ideas he admires in local restaurants, such as the flow of the Silver Dollar and the indoor/outdoor patio space at Drake’s in St. Matthews. The idea for the floor plan came from BJ’s Restaurant and Brewhouse. Rye inspired the open kitchen. “We’re trying to build the perfect restaurant from an aesthetic standpoint and from a food standpoint,” he says. “It’s got to look great, but it’s got to work.”

He’s excited about the open kitchen and the high ceilings in the main dining room; to address the noise factor, he built in high-backed booths that enclose diners in their own private space. He’s pumped about the space at the front of the restaurant, where garage doors open onto the wide sidewalk, providing outdoor seating in nice weather. He’s happy about the staircase leading to a private dining room upstairs, featuring a pretty, carved-wood antique back bar with a French flair. With its distinct spaces, the restaurant gives people options for a whole evening—a cocktail at the bar, dinner in the dining room, and then a trip upstairs for a late-night cocktail afterwards. “People say, ‘I didn’t expect this in New Albany,’” he says. “It’s got more of a Chicago feel to it.”

As for the food, “We had a niche we wanted to fill—a rotating, progressive, seasonal menu that no one else was doing,” he says. Chef Temple offers casual but top-quality food with a focus on cooking from scratch using locally sourced products. “We don’t get stale here,” Hall says. The winter menu, for instance, featured a Korean barbecue small plate, an orange pomegranate salad, and bucatini carbonara. Beyond the creative seasonal offerings, certain items stay on the menu, including the Exchange burger ($14), made with 3D Valley Farms Angus, gorgonzola, caramelized onions, portabella mushrooms, and arugula on a Klaus’s pretzel roll; fish and chips ($14), featuring beer-battered basa, fries, tartar sauce, and slaw; and steak frites ($16) accented with compound butter. Behind the bar, the focus is on bourbon, craft beer, and boutique wines.

GROWING UP IN THE BIZ

Hall got to know the restaurant business early. As a six- or seven-year-old, he rolled silverware to help out his dad, Michael, then general manager of the restaurants at the Hyatt Regency. (Or maybe Dad was just keeping him occupied?) As a restaurant kid, he happily devoured escargot, oblivious to what he was eating. “My dad got me involved in this business without ever meaning to,” he says. “He told me ‘Don’t ever go into the food business.’” 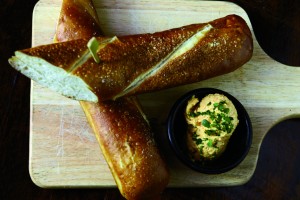 Hall ignored his father’s advice. He started at 18 as a busboy and dishwasher (“the toughest position in the restaurant”) at Buckhead’s in Louisville, then served, bartended, and eventually helped open the Jeffersonville store. His next stint was as beverage manager at Rocky’s, then as a bartender (or “showtender”) at Legends.

He married in 2000. Until the kids came along (Payton, now 10, and Madison, 6), the bartender’s hours suited him fine. Once they arrived, the crazy schedule had to change. On top of that, he began to itch to spread his wings. He made that fateful and perhaps-just-a-wee-bit-naïve vow: restaurant owner by 30.

His bank, Chase, wouldn’t loan to him. No problem: he turned to a local option. Your Community Bank wrote him a loan, and he and his wife, Nikki, took out a second mortgage. And in 2007 he opened MYbar, a sports bar/lounge aimed at 20-somethings.

It was tough going. Twenty-somethings, it turned out, weren’t big spenders, and it hurt sales that MYbar didn’t serve food. They fell behind financially. Ian took a gig bartending at Proof to help make ends meet. To be blunt, the bar was tanking. And Ian and Nikki had their house tied up in it. They looked at their options and didn’t like any of them. It was time for a Hail Mary.

Hall shuttered MYbar, spent six weeks reinventing the business model and remodeling the space, and reopened as the New Albany Exchange Pub + Kitchen gastropub in January 2010. Things took a while to gel. The location was tough—off Grant Line Road, in a strip mall so confusing that even GPSs got the directions wrong. Ian and Nikki had sunk a lot of personal money they would never recoup into revamping a leased space. The restaurant went through more than one chef.

Hall started looking for an exit strategy. “Our plan was to get it back on its feet, get it cleaned up, and then get the hell out,” he says.

But slowly, things began coming together. Hall began thinking maybe he’d stick with it after all. Then, in November 2011, Marty Rosen gave the Exchange a good review and three stars in the Courier-Journal. “That was the day the lights went on,” Hall says. “People were calling because they couldn’t find it. At 4:30 [a half-hour before opening], the parking lot was filled up. We got our ass handed to us that first weekend.” But it proved that they were onto something. Even if some diners weren’t quite sure what a ‘gastropub’ was, they tried it, liked it, and kept coming back. More good press followed.

Back on his game, Hall knew what he wanted to do. He located the property on West Main, an 1875 Italianate building that once housed Schrader Stables, and bought it. (Loans were still not exactly forthcoming, so Hall financed it through the developer, Steve Resch of Resch Construction.) “Most people would have looked at it and seen a disaster,” he says. “I looked at it and saw tables and chairs.” He opened the location in December 2012, a week after closing the Grant Line Road location.

It was a scary move, he admits. The restaurant went from 80 seats in the strip mall to 200 seats downtown (125 in the main dining room, the rest in the bar and private dining space). “We didn’t know what we were getting ourselves into,” he admits. “We didn’t know how it would catch on.” But it did, and they’re filling the dining room regularly, serving 1,500 to 2,000 people a week, Hall estimates, doing lunch and dinner six days a week.

At the Exchange, Hall plans to add brunch on Saturdays and Sundays sometime this spring to coordinate with the New Albany Farmers’ Market. On top of that, there’s a Comfy Cow franchise. Hall has had a working relationship with Comfy Cow owners Tim and Roy Koons-McGee for the past three years, talking about developing a proprietary flavor for the Exchange, but never quite getting it done. No matter; the Exchange offered Comfy Cow ice cream and Hall noticed that customers loved it. Meanwhile, a customer approached Hall, looking for a tenant for a building he owned. Hall looked at the building and thought it fit the Comfy Cow vibe, pressed tin ceiling and all. Meetings were taken, in which Hall thought he was simply the middleman connecting the landlord and Comfy Cow. Instead, somehow, he ended up a franchisee, partnering with the landlord. 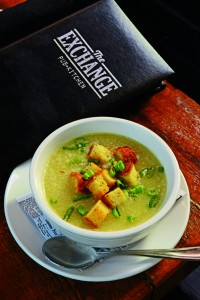 “Phase Two was always going to be another restaurant,” he says. “I never thought I would own an ice cream [franchise], but I loved the aesthetic when I walked in.” And meanwhile, the Exchange finally got its signature ice cream flavor: egg, bacon, maple and brown sugar.

The Comfy Cow location, set to open the week after Derby, will also house the office of Ian and Nikki’s restaurant design and consulting company, BRAND Hospitality Group (BRAND stands for Bar, Restaurant, and Nightlight Development). They started the company to build out the Exchange, moved on to their own Comfy Cow franchise as their next client, and hope to build momentum once they have an office opened.

At 109 East Market, the Comfy Cow venue is easy walking distance from the Exchange. And speaking of things Hall loves about New Albany, that’s one of them. He hails the town’s newly burgeoning restaurant row for keeping things compact. A handful of impressive options lie within a two-square-block area, from the Exchange to Louis le Français to Habana Blues and more. “I love it when people come down without a specific restaurant destination,” Hall says. “They figure they’ll walk and pick it out.” In Hall’s opinion, its density makes the New Albany dining scene not just as good as Louisville’s rangier restaurant rows on Bardstown Road, Frankfort Avenue, and East Market — but better.

Did we mention Hall is an enthusiast? He loves his hometown, and he’s happy to be part of its coming-out party. “It’s not about money,” he says. “It’s about taking downtown and revitalizing it. I grew up here and I wanted to be a part of it—on the front end of getting people to come down here.”

That, he’s doing, with the Exchange and Comfy Cow all in one snug square block. Hall envisions growing both businesses in their current locations and opening more Comfy Cows. For the moment at least, there’s not another restaurant in his plans.

But then, he’s got a big birthday coming up in a couple of years.