Home MAGAZINE ARTICLES FEATURE STORIES A profile of Fernando Martinez — whose The Place Downstairs opens this... 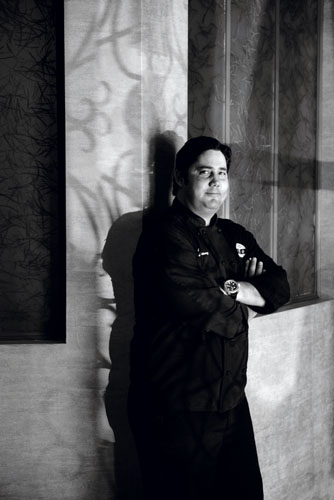 Fernando Martinez has the golden touch with restaurants. Here’s why 2014 will be his biggest year yet.

It’s December 2013, and Fernando Martinez is weeks away from opening two new restaurants: a taqueria in the Highlands and a fine-dining establishment in Jeffersontown. That’s on top of his two hugely popular East End dining spots, Guaca Mole and Mussel & Burger Bar, which opened in 2012 and 2013, respectively. It’s been a lively couple of years.

(This profile appears in the current issue of Food & Dining. See the print version here.)

The pressure’s on. The fine-dining restaurant is set to open in late March (this week). With the taqueria, it’s worse. Fernando had planned to open a taqueria someday, but in late November, when he got word that a Baxter Avenue location was available, he decided to go for it — and to open on New Year’s Day.

So it’s December, and everything’s popping. And Fernando — well, he’s doing something that would boggle most chefs’ minds. He’s vacationing. With his wife, on a 48-foot sailboat in the British Virgin Islands. No Internet. No phone. For twelve days, there’s just the peaceful blue Caribbean and the rocking of the boat.

“The vacation was already paid for,” Fernando explains. “If I’d have cancelled, my wife would divorce me.”

He laughs when he says that, flashing a set of dimples. He and Cristina are a matched set: chef/proprietor (him) and front-of-house manager (her). They’ve opened four restaurants together already, two in the past two years. They needed that vacation.

So never mind the interlude on the sailboat. This is a story about a man who can’t sit still.

It’s also a story of big dreams, hard work, and an unusual culinary education. It might explain a few things about Fernando’s ambition to know that he first came to the U.S. from Cuba on a raft.

But that’s backstory. Flash forward 20 years. It’s January 2014, and Fernando Martinez is about to open his dream restaurant. 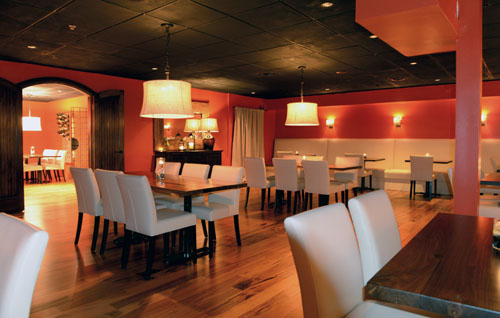 At 50 seats in two intimate dining rooms, The Place Downstairs is gorgeous: the walls a rich red, the floors and tables rustic wood, the chairs and banquettes a cushioned ivory leather. Below street level and accessed only by elevator, the feel is homey yet exclusive: a private retreat. But as he sits at a six-top a few weeks before opening, it’s the menu that has Fernando excited. “We’re gonna try to push it,” he says, “more than anything we’ve done.”

At 40, Fernando is tall and boyishly handsome, slightly padded from all the eating his job demands. He’s easy with a smile, though his fingers subtly jiggle on the table: He’s not used to sitting still this long. But he’s eager to talk about this restaurant, which is his first chance to stretch his talents beyond the strictures of a concept.

“I went to school in France. My grandmother is a Spaniard. I’ve had a tapas restaurant,” he explains. “This restaurant is the story of everywhere I’ve been, everything I’ve done as a chef.”

Working with chef de cuisine Ethan Ray, Fernando developed a menu that offers simple food prepared elegantly, using modern techniques. The dish he’s most excited about is called “pork heaven.” It’s a pork tenderloin stuffed with chistorra, a Spanish chorizo, and wrapped in Iberico ham, accented with clouds of mustard-flavored foam. “I’ve had that dish in my head for a lot of years,” he says, “but I didn’t have the techniques.” The meats cooked at different speeds, and the ham fell apart when cut. Now, he has a sous vide oven to cook the meat evenly throughout, and Activa, an enzyme that binds the ham to the tenderloin as if they’d been born together.

There’s Cornish game hen stuffed with pancetta, dried figs, almonds and herbs with a classic Perigueux sauce, served with truffle gnocchi and glazed carrots. There’s an egg appetizer served in a mason jar filled with smoke. Prices are below fine-dining range, with entrees at $20 to $28 and appetizers at $8 to $12.

“Every chef wants to open a small restaurant where they get to cook with really interesting ingredients,” he says. Not every chef gets to. Competition is crazy; the economy is down. But the downstairs space was wrapped into the Mussel & Burger Bar lease, and it was sitting idle. Fernando saw the chance to open a fine-dining restaurant that didn’t have to cover rent and insurance. And if it doesn’t work? He laughs. “We’ll have a really nice private room.” A pause. “But I think it’ll work.”

When the government shut down his family’s unlicensed in-home restaurant, he decided it was time to get out. He and his mother, Yolanda, crossed the Straits of Florida on a raft, only to be picked up by the Coast Guard and sent back to Cuba. A year later, they immigrated legally and ended up in Louisville. In 1996 or ’97, when he was 24, he went to salsa night at the now-defunct Utopia, where he met the woman who would become his wife. Cristina was 21. (“He was a hottie,” she remembers. “I was like, ‘Oh my gosh.’”) They married in 1998.

It took years of work to save up $70,000 to open Havana Rumba in 2004. In 2007, Mojito Tapas Restaurant followed. Fernando ran the kitchen; Cristina did the hiring and training, developed the drinks menu, ran the front of house. Both places did killer business, but Fernando itched to learn more about cooking. Over three years, he traveled three times to France to take intensive 10-week courses at Le Cordon Bleu.

Life was getting fuller. There were children now. Fernando and Cristina worked 80, 90 hours a week. “Restaurants are time-consuming places,” Cristina says matter-of-factly. “If you’re not there, they don’t work right.” Fernando’s mom lived with them — still does — and helped out with the kids. 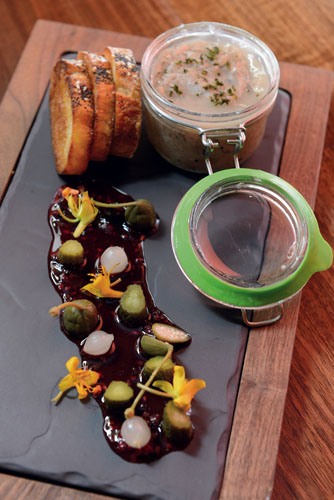 Still, it was time for a break. In 2009, the couple sold their stake in the restaurants. The family spent a year living on Margarita Island, off the coast of Venezuela, where Cristina grew up. Daughter Gabriela was 8, son Luis Fernando was 11; Fernando’s son from an earlier marriage, also named Fernando, was 18. It was the laid-back lifestyle many dream of. There was just one problem, Fernando says: “After two months, not having anything to do, nowhere to be, started driving me crazy.”

So, on school breaks, the family traveled, and once again, Fernando worked for free—this time in restaurants in Peru, Mexico, Venezuela. Even if he was peeling potatoes, he was watching and learning. “Everything I learned in school started making sense,” he recalls. “How to balance food, how to have contrast in texture and flavor.”

At last, he was ready. The family moved back to Louisville and opened Guaca Mole in 2012. (Son Fernando, now 22, works there as a bartender.) Fernando describes it as “modern Mexican.” The influences of his education show in items like the flautas de pato ($8): crispy cigars of duck confit with cherry tomato and Fresno jalapeno marmalade. The pork mole ($16) is served over a swoosh of pureed pumpkin and topped with slaw; in both presentation and flavor, it’s white-tablecloth-worthy. Both dishes balance rich flavors with an acidic partner.

Fernando talks about balance a lot, in food and in marriage. He’s the creative force; Cristina executes. “We’ve been together eighteen years,” he says. “Whether it’s on our marriage side or business side, all we have to do is look at each other, and she knows what I want and I know what she wants.”

“Not everyone can work together,” Cristina says. “But he’s my best friend. We do pretty much everything together, but it’s never like, ‘Oh, it’s him again.’ I’m not over him at all.”

Fernando adds, “It’s really hard to stay married when you’re a chef. You’re working when everyone is having fun. But she understands that I’m passionate. And she’s passionate about what she does. We complement each other. I know what she doesn’t know and she knows what I don’t know. It’s the perfect balance.” Like duck confit and cherry tomato marmalade.

BURGERS AND MUSSELS AND TACOS 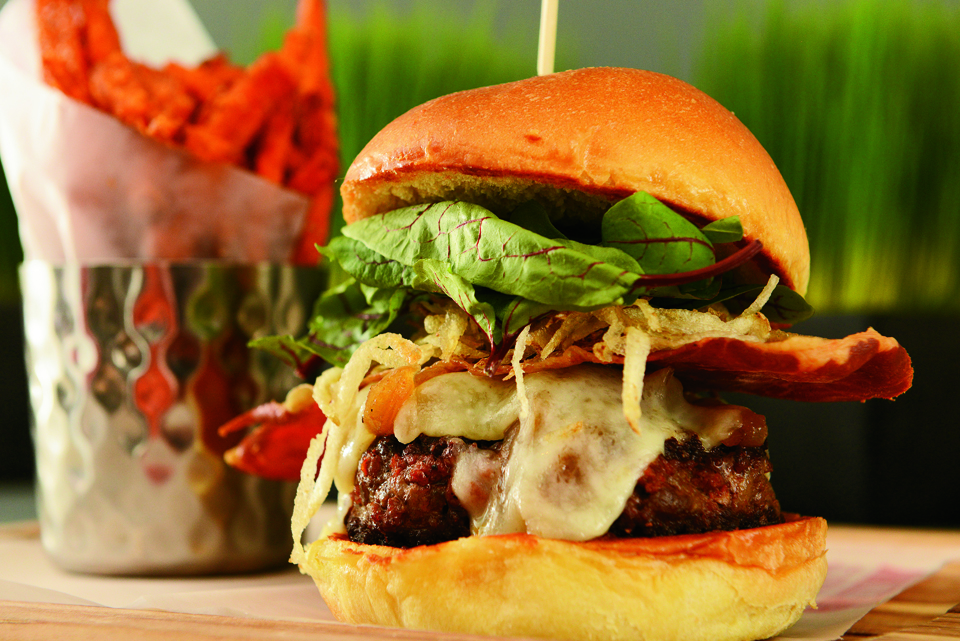 Between Guaca Mole and The Place Downstairs come two other restaurants. When he opened Mussel & Burger Bar, Fernando says, “People told me, ‘You’re crazy. You’re gonna do a locally owned restaurant in J’town?’ But now they see I’m right.”

He’s so right that even a total lack of street signage, an untried concept and a decidedly strange décor can’t keep the patrons away. The food is delectable. The beef sliders ($8) could make you weep. M&BB uses Creekstone Angus, ground in-house using a flavor-packed combination of short ribs, brisket, and top sirloin. The restaurant garnered Best New Restaurant and Best Hamburger awards in last year’s LEO Choice competition. Mussels come in seven preparations, from meunière to curry cream ($7 appetizer, $10 entrée).

Why pair the two, though? Before opening M&BB, Fernando read a book called Purple Cow, which advocates capturing customers with something they’ve never seen. He decided, “From now on, every restaurant I open is gonna be a purple cow. The mussels, I knew they’d get people’s attention.” 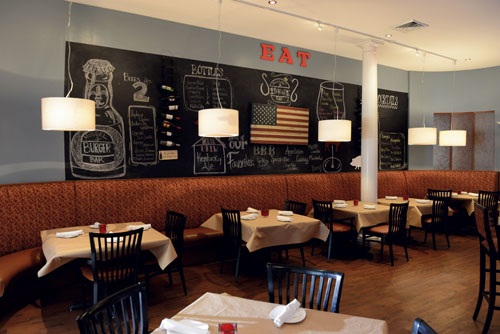 As for the décor, which screams upscale continental? The space was built out for another restaurant; the landlords wouldn’t allow changes. On the bright side, when Fernando and his business partner, cousin Yaniel Martinez, walked into the place, the tables were still laid with silverware. “You could turn the lights on and open the place. The risk was so low, we said, Why not?” They covered the tables with butcher paper and called it good.

Likewise with the taqueria. They took a functional restaurant, made a few cosmetic changes, and opened the doors. That’s how El Taco Luchador leapt into being on New Year’s Day in the shotgun formerly occupied by Lil Cheezers, selling tacos ($2 to $2.75) and tortas ($7 or $8).

It’s a tiny place, with six tables and a minuscule open kitchen in which six or seven people—including, sometimes, Fernando himself—work shoulder to shoulder. In their first week, they saw lines out the door. Customers generally take a relaxed Highlands attitude; when tables are full, people shrug and take their food to go.

That’s the story of how Fernando Martinez opened four restaurants in less than three years. You might be tempted to say 2014 is the year Fernando arrives. But “arriving” suggests reaching a destination and stopping there, and that implication is anything but true. “I want to do another tapas restaurant,” he says. “I would love to open a French bistro. And maybe another Cuban restaurant.”

In other words, it’s a good thing Cristina isn’t over him yet. Because her husband’s drive still burns as hot as the day it impelled him to leave Cuba on a raft. Success hasn’t changed his essential nature. Fernando Martinez can’t sit still. 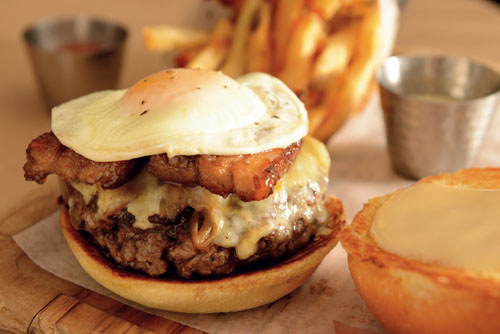