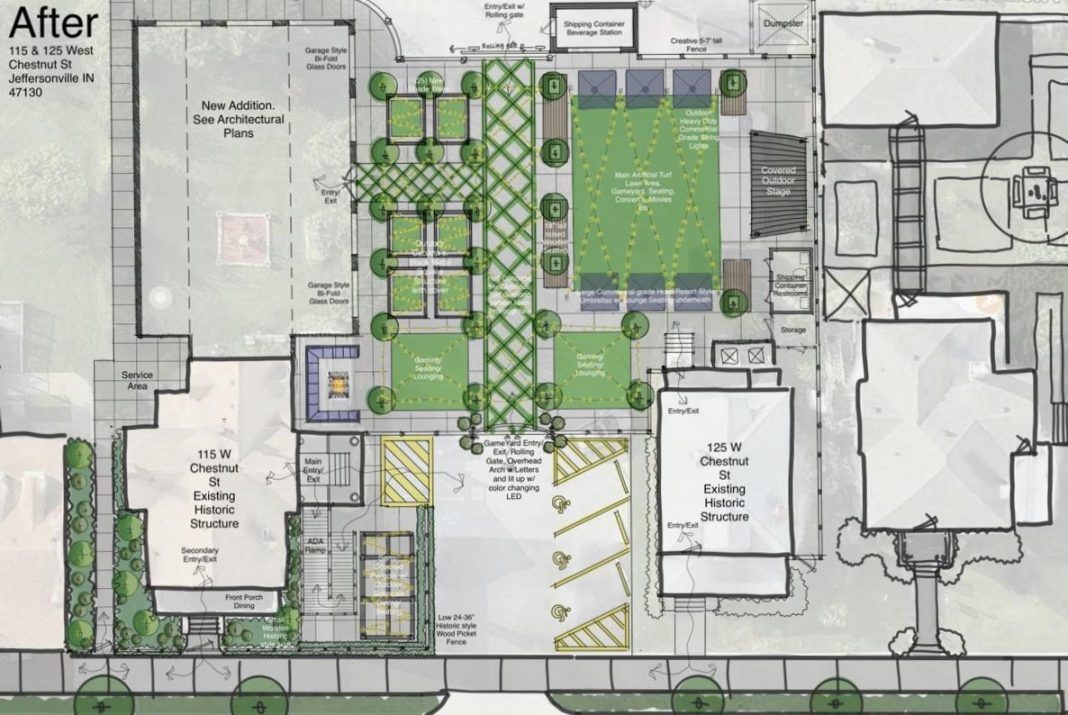 For those peeking into the Louisville Metro from outside, the Big Four is a genuine phenomenon, a former railroad bridge retrofitted for use by human-powered feet and non-automotive conveyances. It spans the Ohio River from Waterfront Park in Louisville straight into downtown Jeffersonville, Indiana.

In the time since the Big Four mobility link was completed, Jeffersonville’s historic city center has exploded with new businesses, art galleries, residential blocks — and hope.

It wouldn’t be accurate to give the mile-wide bridge full credit for the excitement, but to come down the ramp into Hoosierland on any given Tuesday afternoon and see people walking, biking and often fanning out to dine, drink and shop is to glimpse the possibilities offered by adaptive reuse, whether infrastructure or buildings (like Parlour at the foot of the ramp).

Soon there’ll be another entertainment option adjacent to Parlour at Pearl and West Chestnut in Jeffersonville: Union Restaurant & GameYard, described by the News and Tribune’s John Boyle:

The sprawling layout for Union Restaurant & GameYard will comprise two houses sitting on West Chestnut St., the parking lot that separates them and an empty yard behind one of the houses.

The parking lot will be transformed into a green space that will be lined with astroturf. In place of the grassy void will be a 3,922 square foot structure, which will serve as the main dining and gaming area for the venture.

“It’s not a nightspot,” (developer Steve) Resch said. “It’s a family-oriented, communal-type restaurant. We want to be user-friendly to everybody. There are games, food. It’s different than a typical bar or restaurant.”

Resch is partnering with fellow developer Chad Sprigler on the build-out and physical plant for Union Restaurant & GameYard, which is influenced in part by the design of Sun King Distillery in Carmel, Indiana. The business itself will be in the hands of experienced operators.

Bobby Bass of Southern Hospitality is partnering with Levi Donaldson as the owner of the concept being brought to the location. Bass and his wife are behind other popular operations in the area, including MESA in New Albany.

“It’s really taken a life of its own,” Bass said. “We wanted to do something very unique that really draws people in and becomes a centerpiece for the city. It pulls people from Louisville and other areas in the region. Just a really unique venue that has great food, great bars, great drinks, but also has that gameyard feature with a lot of unique games you can’t get anywhere else.”

Those games will include curling, bocce ball and several others. Games will be cycled and rotated dependent on popularity. During colder months, some will be brought into the new structure.

Southern Hospitality’s most recent eatery is 1816 Modern Kitchen & Drinks, which opened in August in Corydon, Indiana. The anticipated time frame for Union Restaurant & GameYard is to be open by Kentucky Derby season, 2020.