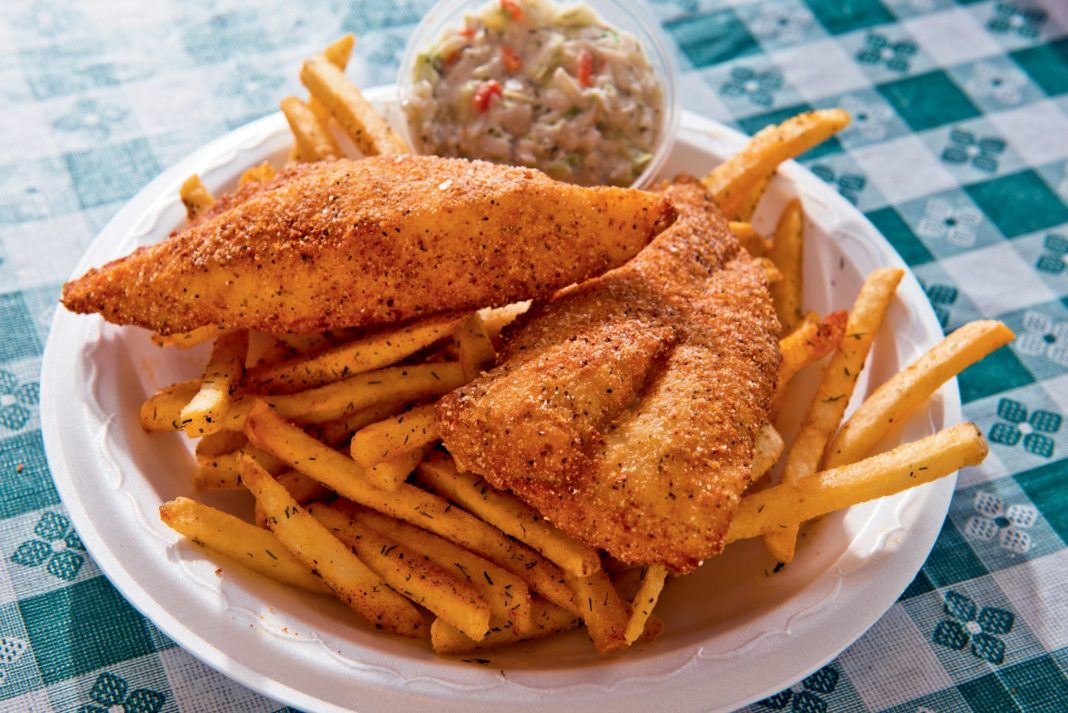 The Lenten Fish Fry traces his roots back to the earliest centuries of Catholic practice. From as early as the second century A.D., the ichthys (the “sign of the fish”) had become a secret symbol used by Christians in recognition of the importance of fish and fishermen in the Gospels.

For nearly two millennia, the consumption of fish on days of abstention has played a prominent role in Roman Catholic tradition and practice. It’s a tradition that continues today all over the world. In Louisville alone, dozens of area churches host annual Fish Frys during Lent.

But it turns out that all those centuries of fasting days have also had an enormous impact on history and the global economy.

(Originally published in the Spring 2020 issue of Food & Dining)

In 1533, England’s King Henry VIII decided to divorce his wife, Catherine of Aragon, in order to marry Anne Boleyn. Of course, we all know what happened next: a radical change in England’s diet and a crisis in its fishing industry.

Oh, sure, that’s not the story you’ll see on Masterpiece Theatre or dozens of Hollywood films, but in the ports and kitchens of England it was big news.

England, of course, was a seafaring and fishing nation. One day it was a Catholic country with an assortment of more than 800 Church institutions. Then it wasn’t: all the monasteries were dissolved by the King. Practicing Roman Catholicism became an act of treason. Any behavior that looked “Popish” was deemed suspicious, including eating fish on Fridays, during Lent, or on any of the other scores of Catholic fasting days that occupied almost half the calendar of the time.

Suddenly, the country lost its appetite for fresh cod, salted herring, eels, and every other kind of seafood. It was a change that rippled through the entire economy, affecting the demand for ships and boats, sails and ropes, and, of course, the hearty sailors and fishermen themselves.

Thirty years later, the decline in the fishing industry turned into a crisis. During the reign of Queen Elizabeth I, Britain’s seafaring capacity had declined to the point that Parliament decided it was a risk to national security and something had to be done. In 1563, in the House of Commons, Sir William Winter argued that “it is necessary for the restoring of the navy of England to have more fish eaten and therefor one day more in the week ordained to be a fish day…”

In a scholarly article called “Piscatorial Politics Revisited,” R.C.L. Sgroi argues that what became known as “Political Lent” was both a matter of economics, national self-image, and national defense. And although Sgroi doesn’t make the case, a person might guess that the rejuvenation of the fishing industry — and all its related activities — might have played a role in England’s famous naval defeat of the Spanish Armada in 1588.

About 400 years later, another similar disruption in the Catholic diet occurred. In 1966, Pope Paul VI issued a decree relaxing the rules on fasting and abstinence and the Catholic Bishops in the U.S. put an end to mandatory meatless Fridays except during Lent. By 1968, according to an article called “The Pope and the Price of Fish,” in the American Economic Review, that action had already caused a reduction in demand that led to a 12.5% decline in the price of fish at the dock. My guess is that Louisville fought against that trend. 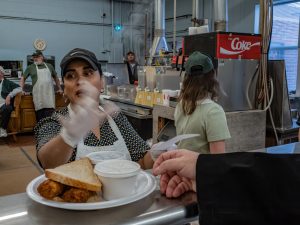 The Fish Fry at Guardian Angels Catholic Church on Preston Highway dates back to the year the Parish was established, in 1957. And it’s still going strong. In years past, when I’ve visited, the crowds have been enormous, the lines have encircled the outside of the building, and the food has been spectacular.

This spring, when I dropped by for the first Fry of the season (they start a couple of weeks before Lent), the cafeteria was thronged and what looked to be forty or fifty volunteers of all ages were dipping, breading, frying, plating, serving fish and sides, bussing tables, roaming the room offering refills, selling chances, and welcoming customers.

Frank and Kathy Ellington have led the Fish Fry for the last five years (they’re turning it over to a new team during the course of this season). Frank says that although Fridays are intense, much of the work happens before the crowds descend.

Everything on the menu (except the French fries) is made in-house the day before the Fry itself: the cracker crumb breading, baked beans, macaroni and cheese, coleslaw, tartar sauce, cocktail sauce, etc. The fish filets are sourced from a local vendor (Olivia’s Catch).

It’s an enormous community undertaking —and although many of the volunteers are from the Parish, anyone is welcome, and as I talked to folks in the kitchen I met several whose only prior connection to the Parish was that they liked the food and thought it looked like fun.

Indeed it does. All the kitchen activities are visible from the cafeteria, and the calm, organized frenzy of an operation that will put out hundreds of pounds of fish in a few hours (the exact amount is “proprietary information” says Ellington with a smile), is something to see.

At any given moment three people are staffing five fryers stocked with ten baskets, each of which holds six pieces of fish. This year, the three fry cooks are Kelly Dauenhauer, Dave Newton, Steven Koch. Their work is as precisely coordinated as a dance team, as they bob and weave around one another and scan the front counter to gauge their timing to assure that they’re keeping pace and don’t get ahead of or behind the demand for fish. On this afternoon, early in the season, they can pause for a few moments between batches, and still keep up with the demand.

Later in the season, they won’t be able to draw a breath. But now, every few minutes sixty crisp, golden filets are lifted forth and transferred piping hot to the front of the line where they’re sandwiched between bread and handed across the counter along the chosen sides. 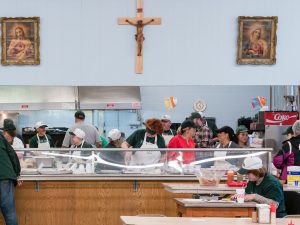 In the early years, says Frank Ellington, this Fish Fry was the crucial fundraiser for a new parish trying to support its school. Back then, he says the Fish Frys were a year-round event. But after 1966, the pace reduced. These days, it’s a Lenten affair, but the Parish always gets things underway early, starting a couple of weeks before Lent.

On the first Friday of this season’s Fry, things were pretty calm at first. The Fry opens its doors at 4 pm (or a bit earlier), and at 5:30 you could step right up to the counter and place your order.

By 6:30, the pace cranked up. The counter was crowded, the long tables were filling up. People were catching up and greeting one another, and toward the front of the room, a cheery woman approached me and asked me if I was a first-timer.

She introduced herself as Helen Sinkhorn, and told me she’s been a member of the Parish since the beginning. Her children attended school at Guardian Angels back in the 1960s, and though she no longer lives in the neighborhood, she still comes back each spring to take part in the Lenten Fish Fry. It’s not a sacrifice for her, but more a kind of communion that brings her together with a community she’s been part of for decades and still continues on as a vibrant force for dozens of volunteers, many of whom told me it’s something they look forward to all year long.

In my old beat, covering food and dining for The Courier-Journal, every year I attended several Fish Frys, across the entire Metro region. Many were sponsored by churches. Some were sponsored by veterans or fraternal organizations or lodges.

They all have their own distinct character and ambiance. Some are held in gymnasiums where kids shoot hoops at one end goal while people dine under the other. Sometimes they’re held in bars. Sometimes the menus are as simple as can be — fish and sides and mass-market beers. Sometimes the menus include items like pan-fried oysters and bratwurst and craft beers and wine. Some Frys feature an array of homemade desserts prepared by the parishioners, and some bring in desserts from commercial bakeries.

But across the many Fish Frys I’ve visited, there is one constant: everybody is welcome. F&D

Check out the guide below for the entire list of Lenten Fish Frys. A special thanks to Ceceila Price from the Archdiocese of Louisville for all her help getting the list to us in time for print.