Home CALENDAR of EVENTS Get ready for ‘cue and blues at Smokin’ On the River Festival... 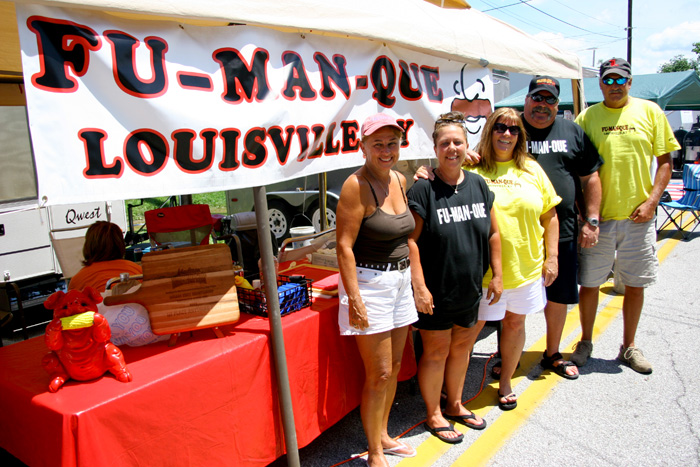 For whatever inexplicable reason, Louisville has no excess of barbecue joints—even bad ones. There are a handful of dandies, but a mere handful seems unacceptable for a restaurant community so advanced on one hand and so burger-centric on the other.

Both extremes are good, which means to us that, somewhere in the middle, there should be a meeting of slow-roasted meat masters, cooks who cook with indirect heat smoke, not full-on fire.
I mean, we’re in the South, aren’t we, so where’s the barbecue bonanza we should expect?

Apparently much of it still resides in the backyards of competitive barbecuers, people who have much more than a clue about ‘cue, but don’t yet make their living from it.

Many of these folks will be on hand this Saturday for the area’s largest barbecue competition, the fifth annual Smokin’ On the River BBQ, Blues and Brews Festival in Jeffersonville.

The festival proper starts on Friday afternoon, but the nearly 60 teams—about 10 are amateur outfits—expected to compete will present their masterpieces to judges on Saturday morning.

The lot of them will be battling it out for $10,000 in cash, with the grand champion walking with $1,500. Who gets that loot is decided on by 64 Kansas City Barbecue Society-certified judges.

Throughout the festival, four professional barbecuers will sell the real thing, which will include barbecue-appropriate brews (some from NABC) and, of course, live blues music.

Unfortunately, and for logical reasons, we the public won’t get to taste the competitors’ creations, but organizers say that which is cooked for the masses is darn tasty. (We’ve got our bibs and paper towels handy!)

Admission to the event is free. Just pay for your brews and ‘cue, and other foods if you’re not fond of smoked goodness.

The festival drew about 15,000 people last year, which is one heck of a big show. Organizers believe that figure could be passed if the weather cooperates.

The festival is easy to find (click here for the location map) since it’s located at the corner of Riverside Drive and Spring Street in Jeff.

Interested? Check out the event schedule and commence making plans.