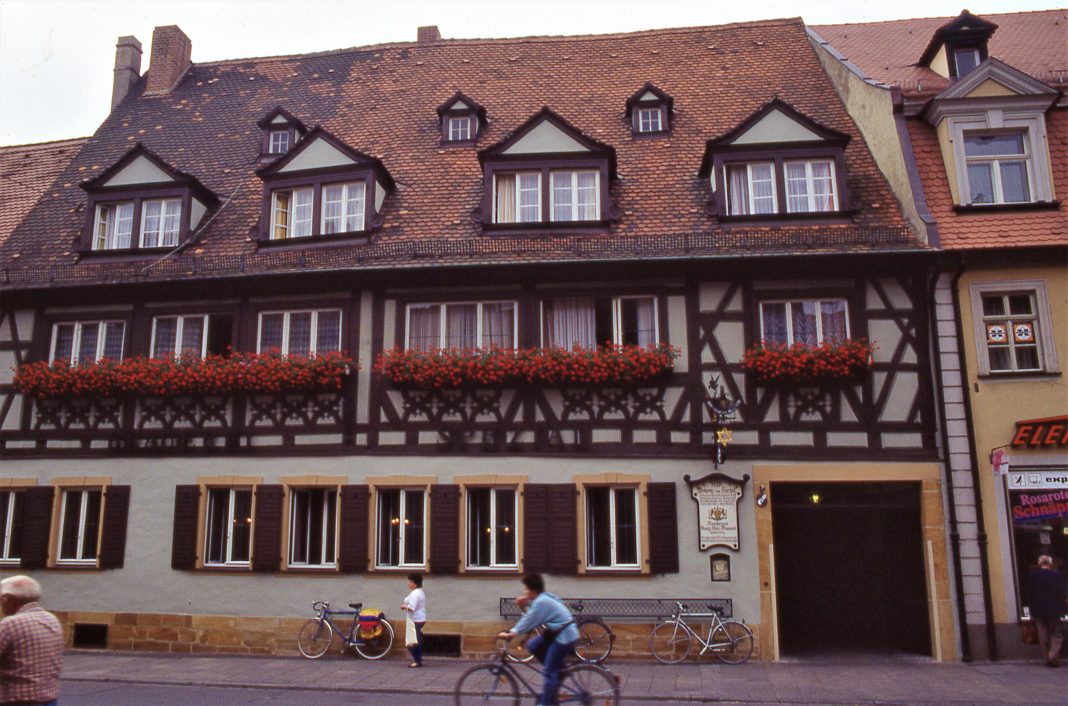 Moravec (the tailor) put down his needle and thread, his big scissors, and the other tools of his trade, cleared the baize-colored table, spread a double sheet of newspaper on it, and laid out on this sheet blackened with print the supper he must have been looking forward to for some time, a supper which varied according to the season and might be curd cheese with chives, a long radish, a few tomatoes with onions, a smoked herring, or boiled potatoes … he’s going out into the kitchen, now he’s bringing in his beer, now he’s sharpening his knife, he’s cutting a slice of sausage, taking a long drink from his glass, wiping the foam from his mouth with the back of his hand.
— W. G. Sebald, from his book Austerlitz

This brief excerpt from a spellbinding novel, a work of scholarship that has nothing to do with beer, nonetheless documents a beer in the life of an ordinary man, albeit a fictional character, but a man and his beer all the same. It probably was a golden lager from a brewery in Prague, like Staropramen, consumed during the 1930s just before the war.

The vignette reminds me that while beer has been my life, my life’s about far more than beer. Perspective and context matter at any time of the year, although perhaps more so in the very beginning, when it seems as if we have the capacity to start anew.

At some point in late summer it will have been 40 years since I worked my first evening shift as a package store clerk at the long-departed Scoreboard Liquors in New Albany. It was so long ago that I hadn’t even considered making my first trip to Europe. The half-hearted plan at the time was to take the LSAT and go to law school, or maybe tidy up the disarray of undergraduate credits to qualify for a teaching certificate.

I’d joked about a career in beer ever since junior high school, a goal manifested more often than not by frantic efforts to “get served” somewhere, and not by undertaking anything genuinely vocational. Right up until the present day, approaching the age of 62, employment in the beer business has struck me as provisional and temporary. Maybe someday, before retirement, I’ll know exactly what I want to do when I grow up.

But truth be told, there were many times when I believed the joke, and interpreted my job as requiring an ongoing, occasionally excessive, consumption of the profits, and this experience is why I don’t have anything negative to say about the concept of Dry January.

At the same time, I join the brilliant beer writer Jeff Alworth in expanding the notion by pointing to the merits of thoughtful, intentional “long haul” moderation. A year ago Alworth penned a column to this effect: Dry January. It’s worth a revisit.

“Dry January” (is) a health phenomenon that has gained substantial cultural currency in the past two or three years. (I personally know several people abstaining this month.) I highly endorse moderation and designating a month for abstinence has given people a window where they are free(r) of the expectation to drink. A month without alcohol is certainly a healthy one.

Though I support the month and any travelers journeying through it with fridges full of La Croix, I do wonder if it’s not actually the shadow of the unhealthy relationship Americans have with booze to begin with. As a stopgap it’s fine, but is there a better way?

Alworth sees binge drinking as the source of many societal problems with alcoholic beverages, and asks whether there’s a “third way” which isn’t drinking too much (“10”) or not at all (“0”), but just enough.

It seems more healthy to find a way to turn the dial to a sane 3 and leave it there all year instead.

This has been my approach over the past several years. It’s partly a function of age, partly a guardrail for my job, and partly just a way to avoid wild swings. It doesn’t mean I don’t sometimes have a longer session that pushes my BAC above .08, but the default setting is to stop well before that point. My standard session is two beers, and a serious decision point arrives if I’m eyeing a third. I’ve tried to restructure my relationship to alcohol so that it’s focused on pleasure rather than effect, and changing my relationship to alcohol has made it sustainable rather than ascetic.

I earnestly hope there’ll be ten more “sustainable” years to my career in beer, and I understand there’ll be times in the future, paid employment or not, when I drink too many beers.

However, these days I do my level best to practice moderation as often as humanly possible, and to drink responsibly. Alworth’s insights about purposefulness in one’s drinking life mirror my own, as have evolved over fits, starts, ups, downs, and a period of years. This being said, if a month of abstinence works for you, then by all means proceed.

You’ll have noticed that in 2022, this beer column is shifting to a new day of the week. Wednesday makes better sense given my other beer work schedule. My New Year’s writing resolution is to consider these 40 crazy years in beer with a mind toward the simplest, most elemental beer pleasures I’ve enjoyed along the way. The past always informs the future, and these ruminations will lean heavily toward the beer classics – the greatest hits of beer, and the golden oldies.

In college, I was advised by my expository writing instructor to write about what I know. Consequently, this year I’ll likely not be writing about ales redolent of “cinnamon bun with apricots, or tart cucumber juice with acai berries,” or Key Lime Milkshake IPAs*, but cask-conditioned Mild, Sierra Nevada Pale Ale, and the contents of Moss the Boss’s beer cellar at L’ Eblouissant in Namur in 1995.

It’s going to be wonderful year in beer, according to the beers I prefer. As Lyndon Baines Johnson once advised, “Let’s reason together.”