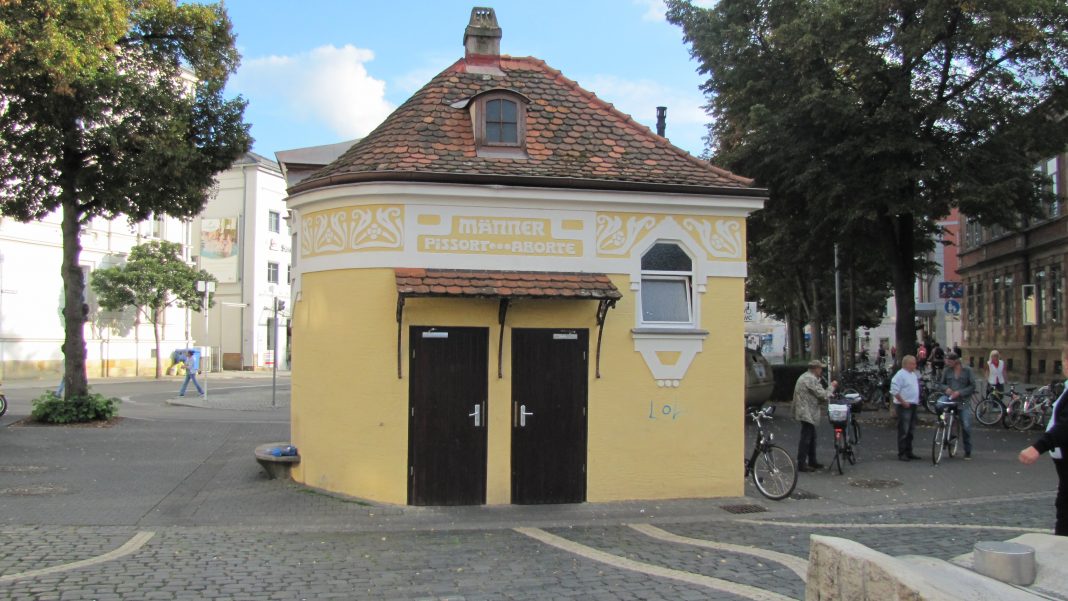 “Let me tell you something about beer: You can never buy beer, you can only rent it.”

These words were famously uttered by Archie Bunker during Season 4 of All in the Family (circa 1973), although similar sentiments have a long history prior to the advent of the groundbreaking TV series.

Interestingly, the sequel to All in the Family was Archie Bunker’s Place, in which the title character became the owner of a bar, thus qualifying for the thankless (hopeless?) task of keeping the restrooms presentable.

It’s an indelicate proposition today at Hip Hops, and the faint of heart may wish to turn away, but in the end old man Bunker was absolutely right. Beer is a rental, and beer drinkers have a vested interest in understanding the rules of the return policy.

My own upbringing focused on one such word to the exclusion of others, as derived in etymological terms from the French.

Hence “pissoir,” or a bare-bones outdoor public urinal for use by men, as I glimpsed just in the nick of time a few years ago as built into the exterior stone walls of an old church in Brussels, and still very much in use; that’s why there is no photograph.

Indeed, your humble columnist has gleaned a fair amount of experience in such matters in a four-decade career as professional beer drinker, especially when imbibing in Europe. Many aspects of the continent’s beer and brewing cultures have changed since 1985, but none more so than a steady escalation in cleanliness and comfort of the facilities at a typical watering hole.

However, it hasn’t always been the case. In 1999, while drinking draft Baltika beer in Moscow at a tiny bar located in the street-level concrete bowels of a towering modern concrete housing block, my fumbling water closet query in woefully deficient Russian was met with a bored shrug. The barman gestured in the direction of what proved to be a slippery collection of muddy shrubs around a darkened corner.

Consequently, my personal theory is that improvements in beer-related sanitation standards generally owe more to the success of the women’s movement for equal treatment than any inherent interest in the rudiments of hygiene on the part of men. In all likelihood, publicans continued pointing to the bushes out back — and this suited males just fine — until modernity brought about changes in migratory patterns, specifically in the form of female patronage.

Only then were modern plumbing solutions contemplated, although we can safely bet results still vary by country and region.

Beer and Bamberg (Germany) are gloriously intertwined, which is why I became a regular visitor so long ago. During a wintertime trip a decade ago I can recall making my way from the toasty upholstered interior of a beer café, through the entry door, across a corridor, through a second door, and outside to where the restrooms were located just off the snowy, arched passageway leading from the street.

They were unheated, and I was in and out in a flash, returning to a cool smoked lager in a far warmer room. At least there was plumbing, albeit featuring frigid fixtures.

Later that very day it suddenly dawned on me that the spiffy modern urinals in the men’s room of Brauerei Spezial (founded in 1536) weren’t even there until the late 1990’s. Before that, men aimed in the general direction of tiled trenches running along the floor. These trenches presumably emptied into the sewer system, although sometimes it’s best to take nothing for granted.

While I hardly can attest to how rental returns were pursued during the Middle Ages, or even as recently as the 1970’s, my impression is that until quite recently the process of waste disposal always differed little from my experience in Moscow, or another in Albania in 1994: A lovely, contemporary wood-lined restroom with a spotless, modern stainless steel urinal, efficiently connected to PVC pipe, which led outside to termination just a few inches away from the town’s river.

It was post-Communist, but pre-running-water.

Unscientifically speaking, one can look at the many centuries-old brewery taps and public houses in places like Bamberg and see that restrooms weren’t included in the original architectural designs. They were added later, away from the seating areas, often fitted into spare square meters of the interior courtyards that are a familiar feature of these older buildings.

This is good, and yet modernity has deprived us of the European beer recycling mechanism I miss the least: The fearsome female restroom attendant.

Sometimes she was ensconced behind sliding glass windows, but more often she remained seated at a rickety wooden table topped with a vase of flowers in front of a battery of stained tiles, guarding her ceramic plate, which was intended for loudly smacking coins into, indicating you’d paid the required tariff and qualified for a square of toilet paper (for the ladies; men usually were compelled to negotiate).

In theory, the attendants were there to keep the area clean, and surprisingly, they customarily did just that, sometimes while you were otherwise engaged in your business. It made for initial embarrassment, but after all, they were skilled and highly trained professionals, merely doing their jobs.

Male toilet attendants existed and were invariably far less reliable than the elderly ladies, especially as continental geography unfolded eastward from capitalism to communism. When I was teaching English in Slovakia just after the Velvet Revolution, I was a frequent customer of a venerable drinking establishment where the restrooms were in the basement, which was common. The restaurant hadn’t yet been privatized, and Gustáv Husák might as well have remained at the helm of unified Czechoslovakia.

My preferred brand of beer also was observed to be the beverage of choice for the subterranean lavatory commandant. Whenever his plate contained the requisite number of coins, he would climb the stairs for another pint of Pay Package Pilsner, and by closing time, he could be found unconscious at his post, snoring in the sour, fetid air.

Don’t worry. For the sake of solidarity with beer drinkers everywhere, I kept filling his plate with coins, and can only hope he made good use of them.

Today’s cover photo is of a nicely appointed public restroom in Bamberg, circa 2014.