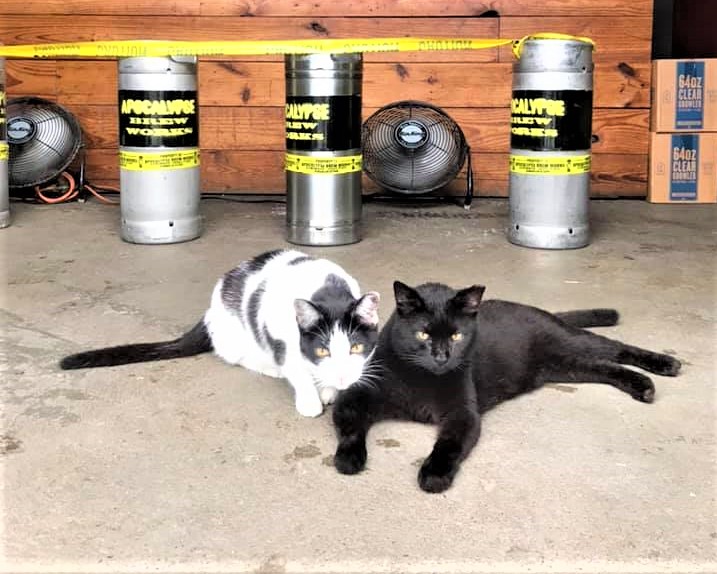 Last Wednesday Monnik Beer Co. and Falls City Brewing Co. released their collaboration batch of Black Is Beautiful, previewed here in June; as an unrelated aside, Falls City has completed its brewery expansion project, and you can read all about it here.

Hip Hops: Black Is Beautiful collabs are on, Fest of Ale is off (until 2021)

Delving into the history books, we find that the events leading to Chicago’s 1855 “Lager Beer Riot” were precursors to Prohibition, with startling similarities to current times. The city’s drawbridges figured prominently then, too.

“During the Lager Beer Riot of 1855, Chicago’s leaders also tried to use downtown bridge access to stymie dissent,” writes Zach Mortice at Bloomberg. “This took place in the aftermath of an epidemic, after public health concerns shook up the city’s politics, when an aggrieved minority that had been discriminated against and targeted by police refused to take any more abuse. The conflict asked fundamental questions about the structure and function of law enforcement, kicked off a wave of police reform, and tested the city’s commitment to multi-ethnic diversity.”

In short, native-born Protestants targeted newly arrived German and Irish immigrants, who were perceived as drunkards, with discriminatory permit pricing and Sunday closing laws aimed at shutting down their saloons and beer halls. These typically functioned as community centers and “welcome wagons” for arrivals from the old country. The ensuing riot was dispersed, but changes came in its wake.

Today, the coronavirus is exacting the largest impact on American beer since Prohibition, and the pandemic will similarly shape this country’s beer story—an insight that is guiding Smithsonian curator and beer historian Theresa McCulla, who is already working to document this pivotal moment.

Many of today’s commercial beer heroes got their starts by homebrewing, which is another fine way to fill quarantine and lockdown hours amid the pandemic.  As such, kudos to the inimitable Daniel van Dijk, who contributes his thoughts to a recent VinePair piece about using freshly harvested “wet” hops in homebrewing.

A previous generation of homebrewers was heavily influenced by Charlie Papazian’s The Complete Joy of Homebrewing, as yet available for purchase in its 4th edition. One of the quintessential homebrewing recipes brought to our attention by Papazian through this book was the legendary Ye Olde Cock Ale, which originally came from “The Closet of the Eminently Learned Sir Kenelme Digby Kt” in the year 1677.

Long ago I had the opportunity to sample a homebrewer’s batch of Ye Olde Cock Ale. In point of fact, it did not taste like chicken and actually was fairly palatable, if a bit more reminiscent of bouillon than Michelob Ultra. Here is the old-school recipe.

Take 10 gallons of ale and a large cock, the older the better; parboil the cock, flay him, and stamp him in a stone mortar until his bones are broken (you must gut him when you flay him). Then, put the cock into two quarts of sack, and put to it five pounds of raisins of the sun – stoned; some blades of mace, and a few cloves. Put all these into a canvas bag, and a little before you find the ale has been working, put the bag and ale together in vessel.

In closing, it is fully fitting and proper that we recognize Papazian’s unique role in perpetuating lost brewing history as it pertains to Ye Olde Cock Ale and many other artifacts of bygone times.

In an earlier, perhaps more militant phase of your humble correspondent’s career in beer, there were periodic (read: decades-long) disagreements with Charlie on matters of brewing politics, but it would be churlish to avoid this opportunity to wish him a happy, if a year-and-a-half belated, retirement.