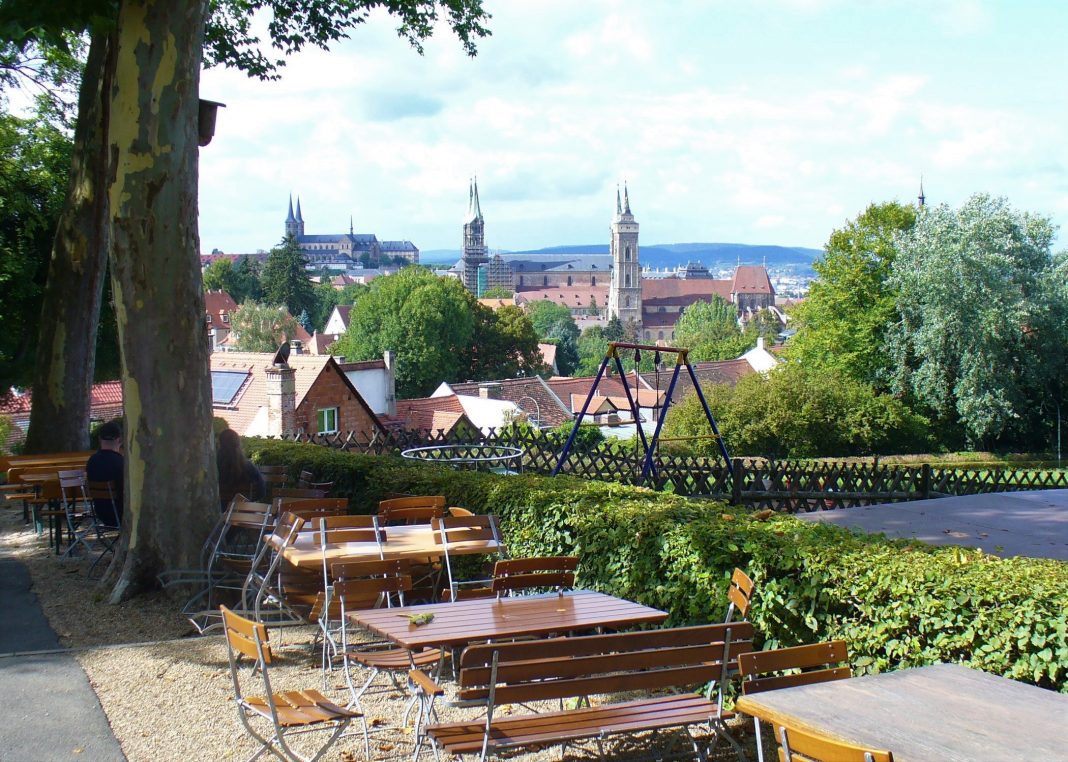 “Day drinking” is a familiar concept. Beer tends to be my libation of choice, and the act of “drinking” is understood; after all, we’re not here to gaze lovingly at unopened containers as we contemplate the potential ramifications of Instagram trendsetting, but rather to enjoy their contents.

Consequently, to me it’s all about daytime beers, and some daytime beers are more memorable than others, even if at first glance there doesn’t seem to be anything at all memorable about them.

It probably has to do with the setting.

In the fall of 2006, my band of intrepid beercyclists spent a cool, overcast Friday morning peddling the dedicated bike routes (ah, the joys of civilization) southbound from the Czech border near Znojmo in South Moravia, through the pastoral region of Lower Austria called the Weinviertel. Our ultimate destination was the Danube River, where we’d join the Danube Cycle Path, a veritable superhighway of pleasurable riding.

Just after lunch, we rode into a small town with a railhead where we intended to hop a local train for the last few miles into the city of Tulln, situated on the Danube. But first there was the not-so-little matter of a much needed rest period, and restorative food and beverages: A bowl of goulash, a couple of lagers and some vital post-ride commentary and analysis.

The local family-run restaurant wasn’t busy. There was a friendly waitress willing to tolerate our halting attempts at speaking German, and a television tuned to an Austrian news channel. It was a warm, inviting atmosphere for stew and refreshment. As we ate, three schoolchildren stopped by and went straight to the bar – for gargantuan ice cream sundaes.

No one so much as batted an eye.

In America, a do-gooder would have called 9-11 or the child protective services. Fortunately, we were in Europe, where sense might yet be characterized as common.

We paid and rolled down the street to check the afternoon rail schedules. Across the way was a small neighborhood tavern called Rick’s, perhaps named for Humphrey Bogart’s establishment in Casablanca, and ideally placed for idling as we awaited departure time.

At Rick’s the barflies were chatting, smoking and conversing. Sports coverage was on the tube. Two mud-caked workingmen were gradually medicating, and while they may have been kicking back at the conclusion of a long day, I got the impression that their drinks may have constituted break time between excavations.

Eventually we boarded the train, stowed the bicycles, and enjoyed the brief commute to Tulln. As it turned out, a Friday evening regional wine festival awaited our rapt patronage, as well as an inauspicious brewpub with good unfiltered “zwickelbier” and heaping platters of pork and sausages. A leisurely ride into Vienna began the following morning.

Looking back on that day, my thoughts invariably return to lunch in the small town, and our drinks at Rick’s. It’s the little things in life that matter, and counter-intuitively, those are the days you’ll often remember, perhaps not the precise details, just the sensation of experiencing fun and authenticity sans the hype, chest-beating and retweeting that seem to accompany every sip of an adult beverage nowadays.

A mug of beer, a loaf of pumpernickel and thou, or whomever you’re sharing them with, alongside a corresponding thought: How many times have I personally enjoyed such a timeless tableau in what I consider my natural habitat, the corner watering hole? There have been hundreds of communions, here and abroad. Life seldom gets better than these.

When you’re a tourist, it is a blessing to take time from your own life and experience complete detachment from one’s normal routine; better to have a daytime beer when and where you like while observing the normal everyday routines of others. It can be participatory or voyeuristic. If the act of escape requires another beer or even three, it doesn’t matter one jot if the ensuing nap takes you through the afternoon.

After all, you’re on holiday.

The point is to avoid being bound by the foolish convention that enjoying beer is a task for the evening hours. Beer can and should be enjoyed in natural sunlight. According to the Bible, or maybe it was W.C. Fields:

“When I was a child, I used to speak like a child, think like a child, reason like a child; when I became a man, I did away with childish things and devoted my attention to daytime beers whenever the opportunity presented itself.”

Later during the same trip abroad, there was a second memorable episode of daytime beers, culminating with Happy Hour in the restaurant car on the EC-22.

It began with two rainy noontime hours spent within the confines of Vienna’s Westbahnhof, enjoying a train station lunch of Weisswurst and “chili con carne” (i.e., the same goulash as always except with Mexican-style seasoning) before adjourning to half-liters of fresh draft Zipfer Urtyp and a roomy place at the stand-up counters of the Imbiss facing the central hall.

By the time the sun reappeared, it was 14.00 and the train was west of the city, thirty minutes into an eight-hour journey to Frankfurt in Germany. It was a providential signal to visit the restaurant car for scenic potables and a paperback novel.

The EC-22 was making good time across the well-ordered Austrian countryside as I savored a König Ludwig Hefeweissbier. Wheat ale isn’t always my go-to beer style, but it was a tasty alternative to the everyday Warsteiner available in bottles and on draft. In fact, my feet rested atop a full 30-liter keg being stored in a cool space beneath the high-top tables.

The long-distance express was scheduled to make relatively few stops during the course of its journey to terminus at Dortmund in Germany, but several of them were clustered in western Austria right around 15.45 to 17.00, prime “train time” commuting hours, and the regulars, all of them men, hopped aboard for beer, schnapps, cigarettes and conversation, then got off again further down the tracks and could be seen dashing to adjacent platforms to switch trains and finish their trips home.

All the while the pleasant vistas swept past, magnified by the oversized windows of the restaurant car. Eventually the attendant, a man in his mid-fifties dressed in an official uniform of dark pants, white shirt and red vest, regretted to inform me that the Hefeweissbier was gone, so I switched over to Warsteiner.

Later, when it was dark outside and lunch a distant memory, I strolled through the six seating cars separating the restaurant (located in direct proximity to first class, not the bicycler’s typical 2nd class wagon at the rear, where my own bike was tethered), found my assigned seat and settled down to an epicure’s dinner of canned herring, black bread, and apricot jam, as purchased at a supermarket earlier in the day and packed for just this occasion.

Also in the picnic basket were two cans of Stiegl lager from Salzburg. They guided me into Frankfurt, where the following morning I had but one question for the hotel desk clerk.

“When do the bars open around here?”