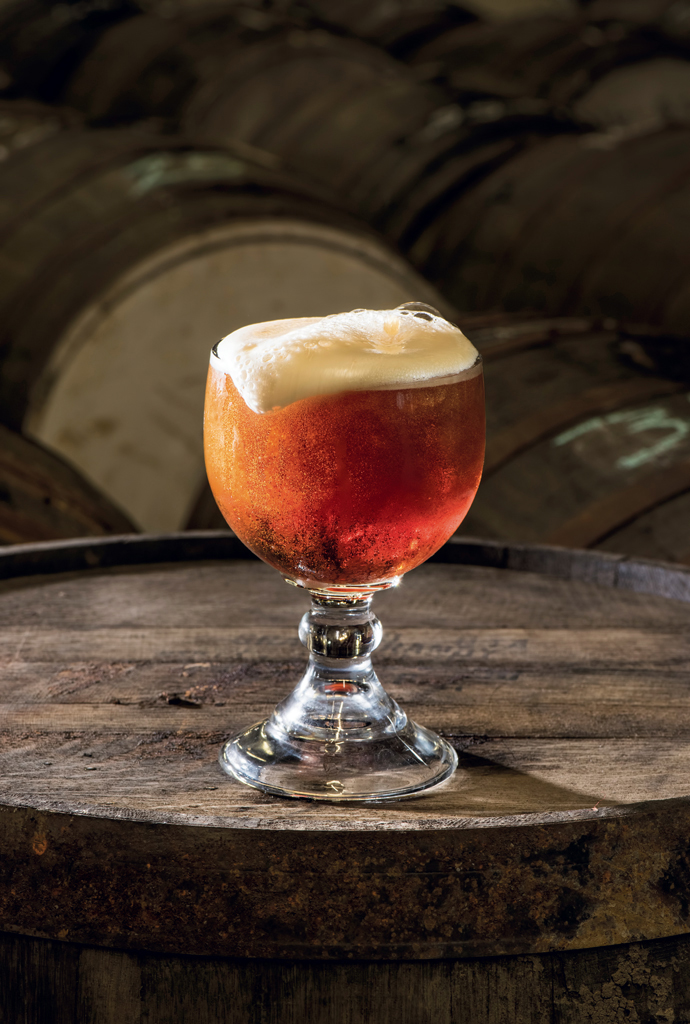 You’ll hear one sort of pitch at a sales meeting, and see another thrown during a baseball game, but brewer’s pitch is completely different. Brewer’s pitch is a resinous substance used to line wooden barrels so liquid doesn’t come into contact with the wood. That’s because exposure to a wooden barrel affects the flavor of its contents, and generally over the centuries, brewers have preferred their wooden vessels to be neutral. Brewer’s pitch remains a handy means to this end, and anyway, stainless steel long ago supplanted wood for beer’s storage and serving.

But what if a beer’s modification is the stated aim of the exercise?

If submerged wood can positively complement the taste of beer, as with white ash chips or oak spirals, and if wooden cooperage harboring funky microorganisms can leverage its own intended outcome (for example, in some styles of sour beer), then barrels formerly harboring spirits offer a wide potential range of flavor and aroma characteristics for beers aged inside them.

Consider an emptied oak Bourbon barrel. It was charred in order to properly host Kentucky’s indigenous corn-based liquor, and after a period of years, the mellow finished whiskey was removed for bottling to proof. However, this once-used barrel retains considerable evidence of Bourbon. Why not repurpose these flavors and aromas by aging beer in it?f submerged wood can positively complement the taste of beer, as with white ash chips or oak spirals, and if wooden cooperage harboring funky microorganisms can leverage its own intended outcome (for example, in some styles of sour beer), then barrels formerly harboring spirits offer a wide potential range of flavor and aroma characteristics for beers aged inside them.

It seems a forehead-slapping moment, and yet the genuinely strange thing is how long it took for someone to grasp the possibilities.

Lost Abbey brewmaster Tomme Arthur, no stranger to the nuances of barrel aging, identifies Bourbon Barrel Zero in this 2013 excerpt from All About Beer magazine:

In 1992, Greg Hall from Goose Island Beer Co. in Chicago might very well have become the first American brewer to produce a bourbon-barrel-aged beer when he filled six oak barrels that previously contained Jim Beam. He poured this experiment at the Great American Beer Festival (GABF) in Denver that fall, inducing rumors, appreciative nods and whispers of something entirely new.

I can second Arthur’s emotion, for at a GABF vintage beer tasting in 1997, the late, great beer writer Fred Eckhardt was seated next to me. When I asked him the beer he considered the festival’s finest ever, he didn’t hesitate: Goose Island Bourbon County Stout.

In our contemporary craft beer era, all manner of spirit-soaked barrels are being merrily procured by enterprising craft brewers as creative mediums for aging and experimentation. The number of beer styles deemed appropriate for barrel-aging also has expanded, although certain combinations strain credulity to such an extent that I’m almost afraid to joke about Organic Free Range Mezcal-Barrel-Aged Imperial Kolsch lest it somehow comes to tragicomic fruition.

No timelessness for the impatient

Such embellishments are hip, and I’m square. Twenty-five years are more than enough to concede the elegant pre-eminence of Hall’s foundational Bourbon-barrel-aged Imperial Stout.

Hall sourced oak Bourbon barrels in Kentucky, and he filled them with Imperial Stout, the stout family’s brawniest hitter. This inspired pairing remains the bellwether. Bourbon and Imperial Stout are burnished and challenging, richly assertive and subtly intricate. They bring out the best in each other.

At strengths typically in excess of 10% abv, Imperial Stout’s dense, black, viscous intensity lends itself to a panoply of descriptors, including roastiness, coffee, caramel, smoke, vanilla, sultana, plums, figs, cherries, chocolate, brown sugar, licorice, fruit cake and bubblegum.  A wooden barrel saturated with Bourbon offers similar and complementary flavors and aromas, as well as a pinch of added alcoholic potency. The brewer’s objective is to choreograph these delightful factors by calibrating, aging and blending with ultimate “Bourbon Stout” balance in mind.

Consequently, Bourbon barrel aging is a thoughtful, time-consuming process. Used barrels must be visually inspected for imperfections, and kept from drying out. While uncut whiskey is an effective disinfectant, it’s better to fill the barrels with beer relatively quickly, lest undesirable microorganisms find a safe haven.

Once filled with beer, the barrels need a place to rest, and you’ll sometimes see stacks of barrels in the brewhouse. Ambient temperatures matter, as well as ready access, because brewers will need to pull samples for taste testing. Often they’ll drill holes in the wood and use stainless-steel nails as plugs after regularly scheduled nipping.

Just as most Bourbons are blended to achieve uniformity of character, typically beers from multiple Bourbon barrels are, too. Brewers often blend in a second batch of base beer. Aging and blending take time and money, explaining why Bourbon-barrel-aged Imperial Stouts tend to be limited cool-weather seasonal releases, both rare and expensive.

Save the cigar for the second bottle

Imperial Stout is ideal, but it isn’t the only style of beer suitable for Bourbon barrel aging. From the hoppy (Double India
Pale Ale, Barley Wine) to the malty (Doppelbock, Belgian Quadrupel), characteristics of Bourbon can meld with those beer styles boasting the heft and complexity to compete.

Balance, smoothness and harmony are the watchwords when seeking worthy Bourbon-barrel-aged beers. Beer and barrel must co-exist as equals, with discernible contributions from each. If they don’t, a glorified boilermaker is the likeliest outcome.

Here’s how not to do it:

Assistant Brewer: “Great. How many fifths of Old Rotgut should I pick up at the package store?”

A small number of Bourbon-barrel-aged beers are available year-round (Goodwood Bourbon Barrel Stout, New Holland Dragon’s Milk). Others are the sporadic targets of fervent cult appeal, like Against the Grain’s Bo and Luke.

Plan now for the approach of winter. Online ratings aggregators like
ratebeer.com and beeradvocate.com are the best sources for building your shopping list. Brewery websites list seasonal release dates, and it’s always a good idea to befriend the beer buyer at your neighborhood package outlet.

Goose Island Bourbon County Stout endures, more widely available than ever thanks to AB-InBev, the Chicago brewery’s parent. BCS remains an impeccable example of Bourbon-barrel-aged Imperial Stout, these days the elder statesman in an extensive, ever-changing yearly barrel-aged program. Even I can remember the annual release date for BCS. It’s Black Friday, on Thanksgiving weekend.  F&D

Bourbon News & Notes: Insuring the future of the white oak, and two tastings with the Bourbon Women