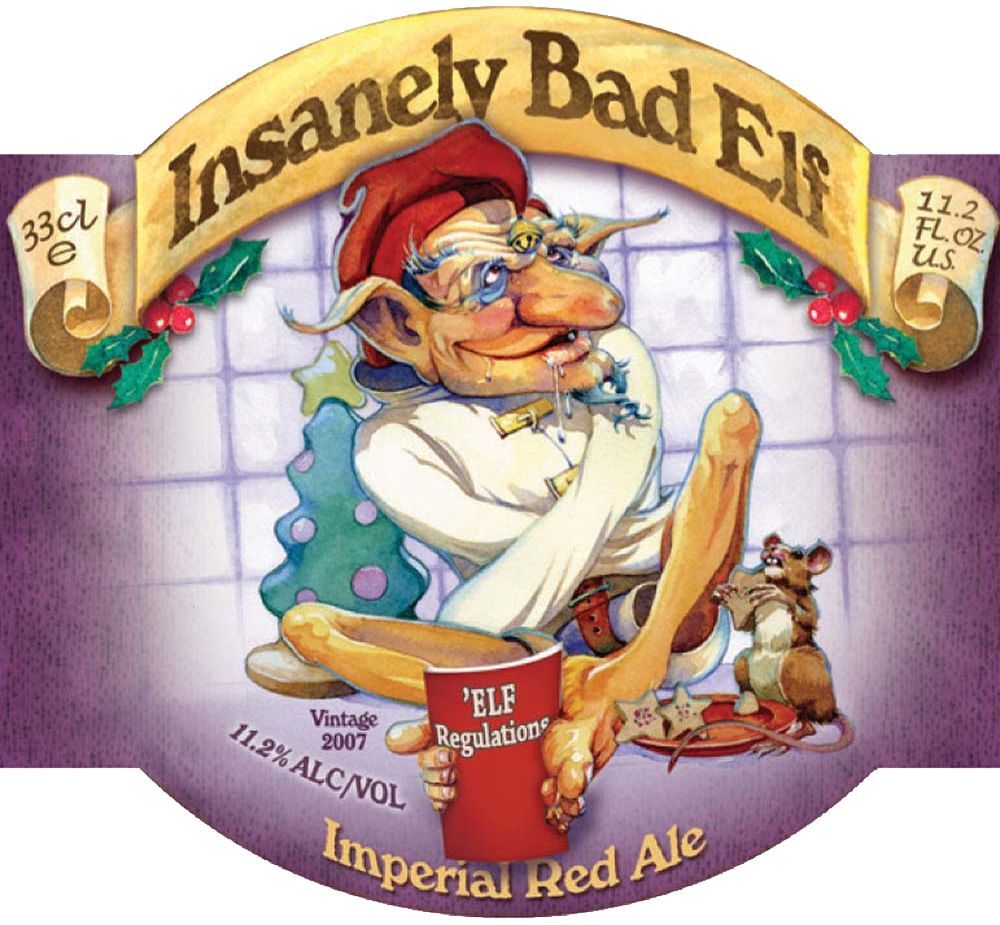 “My goodness”, muttered Claus, recalling his visit to the Institute, “the restrictive outerwear, the padded room-even padded Christmas tree ornaments. Horrifying! Yet the little chap seems happier than he’s ever been” Claus took a thoughtful sip of a most warming red ale. “Perhaps sanity is over-rated…Ho,Ho,Ho!”

Ridgeway Brewing​ was established in 2002 by former Brakspear master brewer Peter Scholey in South Stoke, Oxfordshire UK. I mention Ridgeway today for two reasons; the Insanely Bad Elf graphic is brilliant (all of Ridgeway’s creative seasonals are described here; make mine a Lump of Coal), and the brewery was part of the now dispersed portfolio of Shelton Brothers importers, which passed into history earlier in 2020.

For many years during my previous career as a pub owner in New Albany one of the year’s holiday highlights was our Saturnalia promotion, a celebration of winter, seasonal and holiday beers. For a decade or so from 2004, Saturnalia was calibrated to launch the day after Thanksgiving, and to run through Christmas. We’d stockpile kegs of beers like the Ridgeway Bad Elf series, Sierra Nevada Celebration Ale, Anchor Christmas Ale, and numerous others from America and the world.

Then they’d be tapped, one after another, through the end of the year. Any suitable festive beer, whether dubbed as a holiday seasonal or not, was fair game for consumption. They weren’t necessarily dark, strong or spiced.

Saturnalia (the beer fest) had relevance and resonance. People return home for the holidaze, and to me it always seemed that winter seasonal beers provided the most suitable accompaniment to the joys of reconnecting, sharing war stories, and remembering those who no longer are here – the folks I’m very thankful to have known while they were here on earth, walking among us.

Many of our contemporary winter holiday traditions derive from Saturnalia’s pagan roots, including the hanging of wreaths and garlands, donations to the needy, prayers for peace, time off work to be enjoyed with family, and of course eating, drinking and merriment.

If you’re curious about the origins of Saturnalia, an article in 1843 Magazine (from The Economist) takes us to ancient Rome: Why Christmas can never be cancelled; Boozing away the winter blues is a long-held right.

It was only some 350 years after Jesus was born that newly Christian Rome put an end to centuries of squabbling and settled on December 25th as the date of the virgin birth (a few holdouts in the Orthodox church still prefer the January celebration).

The end of December was already Roman party season. Rome was awash with drunken feasting during Saturnalia, the most debauched carnival in the calendar (and precursor to the modern Christmas party), which the Emperor Augustus limited to three days, and Caligula extended to five. During this period gambling was allowed in public and people swapped boring white togas for colourful robes. Roman life, normally so hierarchical, was turned on its head: slaves were served wine by their masters, cross-dressing was encouraged (the pantomime dame has ancient roots), and an ordinary man was elected King of the Saturnalia with the power to pass any “law” he fancied, so long as it was suitably hilarious.

Concurrently, the Courier Journal brings us the beers of Christmas present, right here in River City.

Cheers, everyone. Here are the 12 Beers of Christmas from Louisville’s craft beer scene, by Kathryn Gregory

This holiday season, Louisville’s craft brewers have been putting the finishing touches on some creative winter warmers to help you celebrate the season in style. From imperial stouts to robust IPAs to ciders with a snap, we’ve rounded up the “12 Beers of Christmas” to help you drink local as you celebrate the holiday and the year’s end (finally).

As a footnote to the preceding, a tout for a Southern Indiana holiday seasonal of long standing: New Albanian’s balanced and spicy Naughty Claus (full disclosure: that’s my former business).

Today is Monday, December 14, and the resumption of indoor dining and beverage services for bars and restaurants in Kentucky at 50% capacity, following the suspension of indoor service on November 20 by reason of the state’s COVID suppression measures.

In a recent op-ed appearing in newspapers in Kentucky, Kentucky Guild of Brewers executive director Derek Selznick outlined the challenges faced by craft brewers during the pandemic.

“While the CARES Act helped,” wrote Selznick, “its impact is minimal compared to the damage already sustained by existing issues impeding brewers’ abilities to get a product to market, which the pandemic has compounded. Further help will need to be provided to ensure swift recovery and to facilitate future growth.”

The moving pieces are far too many to document here in detail, so I’ll conclude today’s column by joining Selznick to advocate the simplest grassroots action possible by folks like us in troubled times like these:

“Please support your local brewer and other small business retailers.”