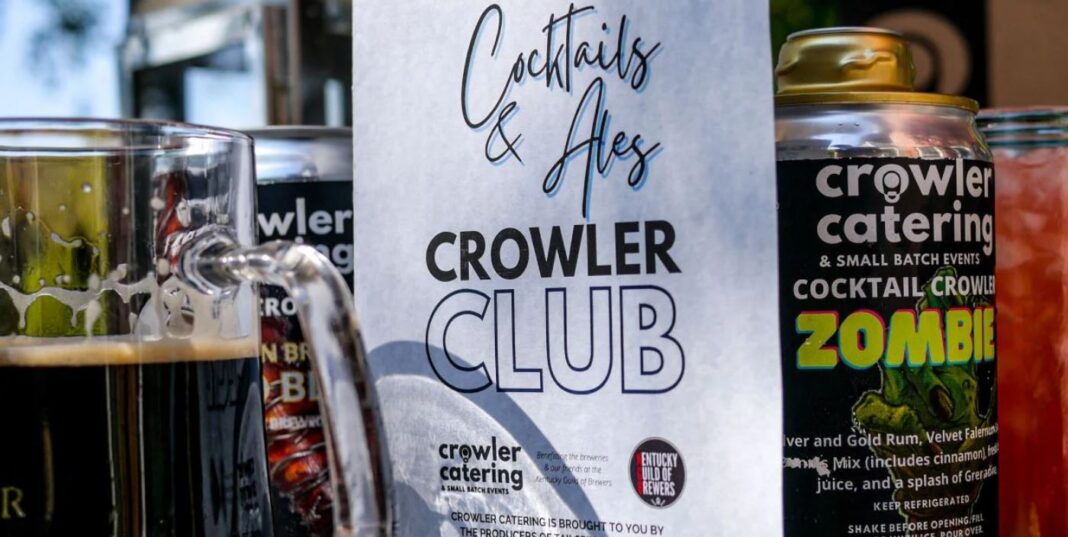 At the present time there are 26 breweries in Louisville, not counting Against the Grain’s production facility.

Or maybe there are more; beats me. Six breweries in New Albany don’t count toward this total, unless they do, since Monnik brews in Indiana and Kentucky. Each state has a guild to promote the interests of its breweries, and Louisville Ale Trail (source of this number 26) quite capably advocates for locally brewed beer.

So does Crowler Catering, and therein lies both a story and an opportunity to support local independent brewing.

In 2014 Tisha Gainey and Trevor Cravens launched HB Productions as a platform for Tailspin Ale Fest at Bowman Field. From there Gainey and Cravens expanded HB Productions into other events, including Bowman Fest, Barrell Roll and J-Town Craft Beer Fest.

Tailspin 2020 made it under the wire just before the COVID-19 pandemic brought all public events to a screeching halt. For HB Productions, revenues and immediate prospects disappeared overnight. But by April of 2020, Gainey and Cravens had brainstormed a creative pivot: Crowler Catering, as described by the Louisville Small Business Development Center, with whom they were working at the time:

(Crowler Catering was) an opportunity born out of necessity. They leveraged their catering liquor license to offer delivery and pick up service of limited release craft beers and pre-made cocktails. They formed strategic partnerships with local food purveyors to offer gourmet snacks and other foods, often pairing them together in interesting packages for delivery to people who were stuck at home during the quarantine.

Father’s Day is coming on Sunday, June 19, and a prime gift opportunity for dads, as well as moms and just about anyone else of legal age who enjoys libations with a nibble, is the  Crowler Club, a subscription delivery service offered by Crowler Catering.

A crowler is a 32-ounce can that transcends the more familiar experience of the growler by removing all oxygen during the on-site canning process. The Crowler Club is a monthly selection of two crowlers (craft beer, craft cocktails or both) along with two snacks, as sourced from artisan bakeries, small kitchens and food proprietors. The package is delivered directly to subscribers, and happy hour merrily ensues.

Our craft beer selections are taproom exclusives or hard-to-find seasonals from many local and regional breweries. The cocktails are all handmade with fresh ingredients and delivered in a resealable crowler so you can enjoy over a few sessions.

A few pertinent details, as borrowed from the web site:

As I type these words, the Summer 2022 (Vol. 74) issue of Food & Dining Magazine is being distributed. My Hip Hops print column therein addresses a consideration of growing importance as the number of American breweries approaches 10,000: “When it comes to the American ‘craft’ beer game, it might be easier to enter the maze than to find your way back out.”

Next week, I’ll catch up on news items from the wider world of beer and brewing. Until then remember the words of a very wise person.