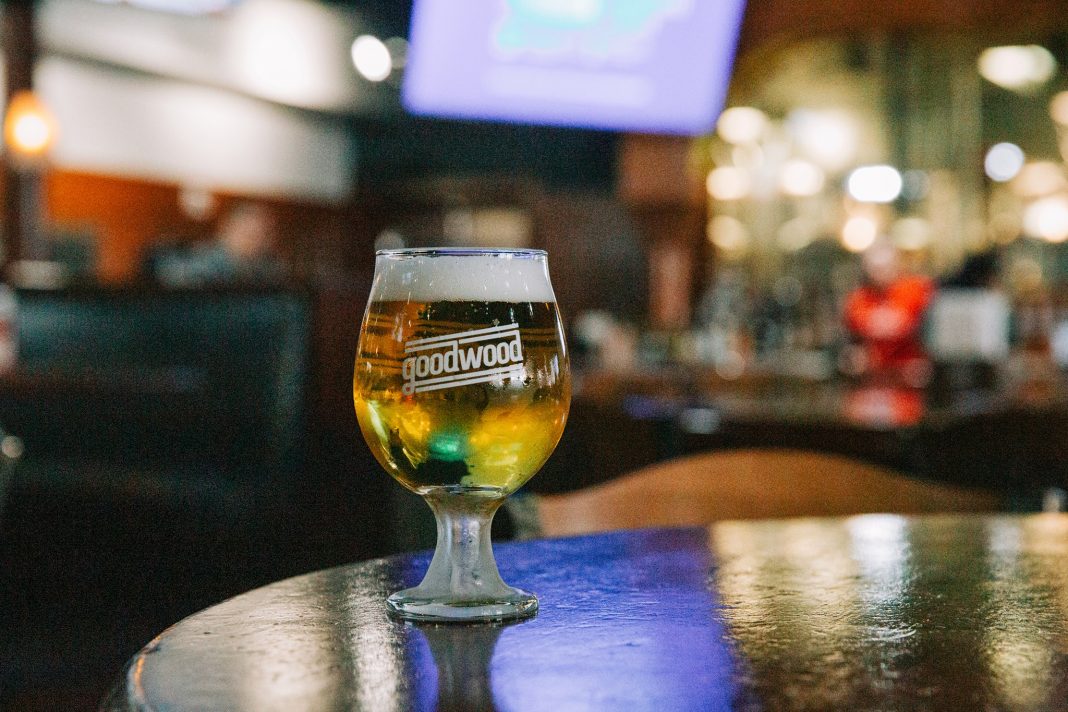 I wasn’t keen on Alcatraz, but Rock Bottom and Ram usually had solid house beers on tap. Cynicism aside, it mattered having these options prior to 2009, but when Sun King opened that year, to be followed by another dozen or more genuine indie breweries and satellite taprooms in downtown Indy, the chain brewpubs there became far less enticing.

Capitalism instructs us that one company’s unfortunate downfall is another firm’s budding bootstrap, and so it is that Louisville’s Goodwood Brewing and Spirits officially opens its new location (with a working 10-bbl brewhouse) today in the 140 S. Illinois Street space formerly occupied by Ram.

You can read the information release at Indiana Beer, a website that covers the Indiana craft beer scene and participates in it, staging events and offering marketing services to breweries.

Goodwood Brewing and Spirit’s newest brewpub will open in downtown Indianapolis on July 5. Goodwood Indianapolis will feature a full kitchen and brewery onsite. Their well known beer and spirits, seasonal and rotating brews will be on the menu. A diverse food menu features southern classics with a twist, such as Chicken and Waffles, Buffalo Cauliflower, Bourbon Brined Pork Chop and a unique and delicious weekend brunch. All menus highlight house made and craft beer infused sauces, including Goodwood’s new line of beer infused hot sauces.

Goodwood was putting the finishing touches on its adaptive reuse of the Ram facility when it announced yet another new site, this one in Owensboro: Goodwood Brewpub coming to downtown Owensboro, by John Kirkpatrick (The Owensboro Times).

Chief Executive Officer Ted Mitzlaff was already familiar with the area and cited a growing downtown and The Enclave location as their primary inspirations behind the expansion.

“I fell in love with Owensboro years ago when I owned a specialty chemical company and would frequently service our clients in the area,” Mitzlaff said. “Goodwood has always had a strong following in Owensboro and the downtown growth has been tremendous. When we saw The Enclave, we knew immediately we had found the ideal location.”

Goodwood’s Owensboro operation is expected to open for business by the end of the year. It will be the company’s fifth location, joining Louisville, Frankfort, Lexington and the aforementioned Indianapolis.

Returning for a moment to Indiana Beer, the website’s senior editor Mark Lasbury has an upbeat review of last weekend’s Kentucky Craft Bash, as well as kind words for the Kentucky Guild of Brewers, which organized the fest’s return.

The Kentucky Guild of Brewers, run by Executive Director Derek Selznick, put together a great event on that spot, taking into account the last of the Covid protocols and the fact that so many people want to get back out into the world for events. There were more than 60 breweries on hand pouring 200+ beers (with a handful of meads and ciders and even three sakes). The theme of the guild is “By Brewers, For Brewers,” and the event was a great time for attendees and brewers alike.

As I drift into the working week, props to WDRB-41 for offering comic relief in the run-up to the July 4 holiday with this story about First World Beer Problems.

“We’ll get a Coors truck in sometimes, we’ll get a Miller truck in sometimes, but we don’t know and our (sales) reps don’t know,” said Jordan Hincks, manager at Dundee Tavern. Hincks says Miller Lite bottles have been difficult to get in stock at the bar, and she expects after this upcoming 4th of July weekend, she’ll be out and have to switch to cans. “And I am expecting to go out of Coors Lite because Coors Lite this week was the one product they didn’t have any of,” she said.

Credit reporter Darby Beane for (a) an ironclad appreciation of deadpan delivery, and (b) asking the sort of question intended to suggest a brilliant solution to these mass-market worries.

There you have it; sounds like a plan, all of which reminds me that decades into my career in beer, I still find “light/Lite/leicht” brews objectionable. Small wonder I’m such a dysfunctional American.