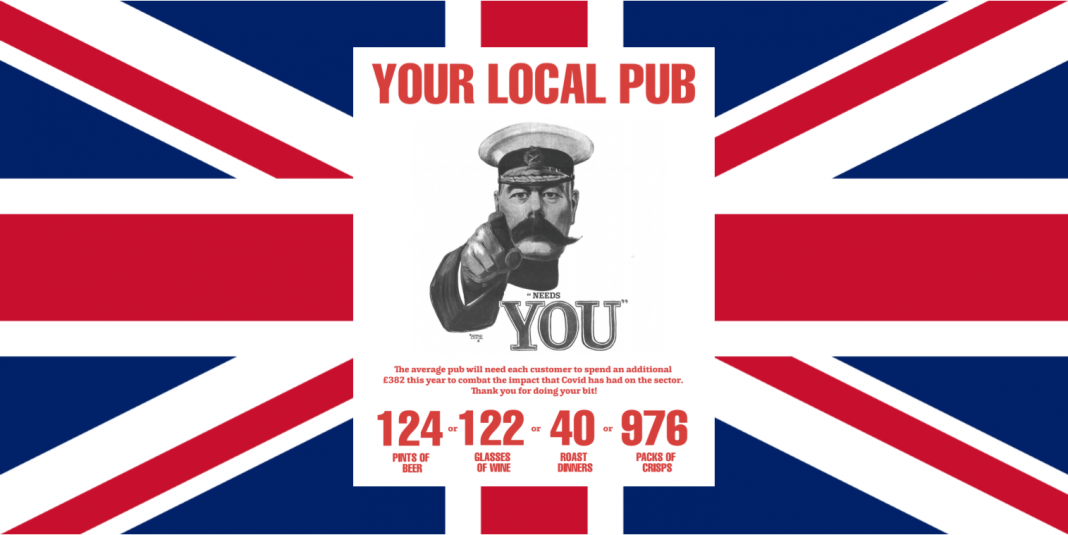 “Pubs, restaurants and cafes in England, Scotland and Wales, will be able to serve customers inside from Monday (May 17),” according to the BBC. “But things won’t quite be back to normal, with some Covid rules still in place.”

Citing the financial damage caused by COVID closures and restrictions to the food and drink industry in England, Scotland and Wales, the firm Company Debt estimates the imminent need for a £25.66 billion “boost to return to pre-pandemic levels.”

“We wondered how much every person in the UK would need to spend in order to reach pre-pandemic levels. In particular we wondered how far that money would go in pubs, one of the most beleaguered sectors. We came up with a figure of 124 per pints per adult, based on a figure of 52 million adults in the UK.”

It didn’t take long for a “Your Local Pub Needs You” poster to emerge (today’s featured image), asking pub-goers to spend £382 extra this year in support of an estimated 40,000 pubs and bars experiencing hard times.

The group has called on people to drink either 124 pints or 122 glasses of wine to do just that. For those who don’t want to consume alcohol, it also suggests that people can eat 976 packets of crisps or 40 roast dinners at the bar.

I suppose it’s all tongue-in-cheek, but then again we know all about those inscrutably stiff upper lips across the pond. Winston Churchill made it through the war with champagne and cigars for breakfast, and accordingly I wish there might be a way for me to help put a dent in the cask-conditioned ale deficit.

Of course, time was when I’d have parachuted down to coastal Cornwall, eager to consume my quota of 124 pints before the conclusion of a two-week holiday. Rumor has it that I did just that in 1998 on a long weekend in Cambridge. All I can remember is speculating on the whereabouts of Syd Barrett.

Now, in my dotage, storage capacity has diminished, and I’m weirdly reminded of an anecdote about the late baseball slugger Harmon Killebrew (who neither drank nor smoked).

One of the classic old-school home run hitters, Killebrew retired in 1975 following a two-decade-long career in the big leagues. Later in the 1990s during the sport’s “juiced” power-hitting era, Killebrew was asked in an interview how many home runs he might hit if he were playing baseball in 1999. He replied, well, maybe 30 or 35.

The interviewer was aghast. Is that all?