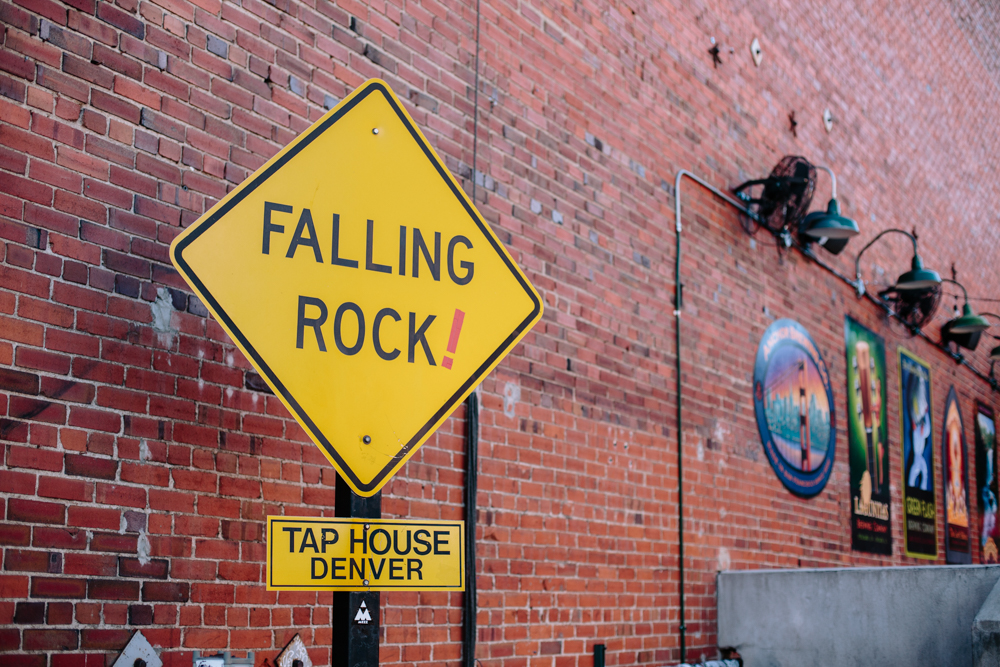 Shippingport Brewing and its Sally Forth Taproom opened last week to much acclaim in or near Portland, depending on one’s competitive feelings about Louisville geography. I believe Shippingport’s birth boosts the total of functioning breweries in metropolitan Louisville to 30, and even more if counting multiple brewing sites for the same company.

Maybe it was already past 30 before Shippingport joined the scene, but by any standard of brew system accounting, those hardscrabble days when we’d be compelled yet again to choose between beers at the Silo or Bluegrass Brewing Co. have been so comprehensively erased from the rearview mirror that they might have occurred just after FDR swept away Prohibition, not in 1993.

It’s a very good thing for us here in Louisville, quite fine, indeed; however, out in Denver, the Falling Rock Tap House (“No Crap on Tap”) closed for good on Sunday.

Falling Rock was a much loved beer bar of the 1990s model, and while obviously there is no direct connection between Shipppingport opening in Kentucky and Falling Rock closing in Colorado, beer writer Jim Vorel suggests at Paste that these seemingly unrelated events are nonetheless part and parcel of an evolving alteration of the “better” beer landscape: “A Fond Farewell to the Old-School Beer Bar.”

Why “better” and not “craft”? It’s because I don’t wish to repeat the mistake Vorel makes in his definition of a beer bar. I made a correction.

A “beer bar,” for the purposes of this article, is one where better beer is the primary focus of the drink program, especially in the form of draft beer sales. Typically, this means a notably large number of taps (Falling Rock had 90 draft lines), perhaps an extensive bottle or cellar list, and a passionate crew of staff who act as beer evangelists, able to make suggestions and help a customer find the perfect beer for them. A beer bar may have an in-house restaurant, but the importance of the food is typically understood to be secondary to the beer—the same can be said of its cocktail or wine program. The beer on tap, meanwhile, is ideally a balanced blend of styles that appeal to all sorts of drinkers, often with a focus on rarities or beers otherwise difficult to find in the marketplace.

Speaking as someone who started operating a beer bar in 1992, it must be said that not all, and sometimes quite few, of the “better” beers on offer back then were those eventually identified as “craft” (brewed by indies in America); rather many, and in our case most, were imported.

Furthermore, while some 90s-era imports might have fit the subsequent parameters of “craft” (De Dolle from Belgium springs to mind), many of them didn’t, and never will. Consequently Paulaner Salvator Doppelbock was, and remains, a brilliant example of the traditional Bavarian style, albeit coming to us from a brewery that simply cannot be configured to fit prevailing “craft” orthodoxy.

Questions about imported beers always revolved around freshness, a consideration surely more relevant to Helles, Pilsner or similarly light styles, but I was craving a Doppelbock as I wrote this article over a breakfast of pickled herring, Scottish marmalade and rye bread.

It’s absolutely true. Imported beers can be compromised by long journeys. The odds these days are much better, with international shipping far advanced compared to before, enabling importers like Paulaner USA or B. United in Connecticut able to assure freshness in a way that few could have attempted 25 years ago.

We might exhaust the remainder of daylight hours arguing over the influence of carbon footprints, climate change, and numerous other factors pertaining to the global economy, but for the moment I’m accepting matters as they are, primarily because the bulk of my entire career in beer has been taken up with venerating the great beers of Europe.

Returning to beer bars, in my experience imports were big in the beginning, to be gradually supplanted by “microbrews” and later “craft beers,” although beers from afar seldom were excluded entirely. The best of the better beer bars sought to showcase excellence, regardless of origin.

Rant concluded, and now back to Vorel’s central point, which I believe is true to a significant degree: consumer tastes definitely have changed, legal regimes have been adapted, and the classic beer bar is being replaced by all those craft brewery taprooms.

This is a story that has played out everywhere, and it’s a threat more existential than the still-onerous restrictions of COVID-19, a more pervasive sign that the time of the “craft beer bar” has simply come and gone in many locales. Because when you get right down to it, our patronage has increasingly shifted away from those old-school establishments, to the constellation of brewery taprooms that surround them. The more taprooms there are, the less often we make it out to the classic beer bar.

So it is, and so it likely shall be. It is both fitting and proper, and perhaps even inevitable, that the revolution in American beer would result in a taproom-dominated, on-premise, neighborhood milieu. Rightly so, in my estimation. It’s the culmination of everything the founders fought for, don’t you think?

In my capacity as a precarious old fart, I’m just starting to get out and about after more than a year playing the pandemic protocols safe and close to the vest. Two weeks ago we dropped into Mile Wide Beer Co. for some delicious Mac’s at Mile Wide pizza alongside several stellar local house beers brewed by Kyle Tavares, in my opinion Louisville’s most underrated brewer. Included was a session-strength smoked golden ale, which gladdened my heart. It was a wonderful two hours.

Still, in my own world, I’m as yet unwilling to accept either-or propositions. We need a comprehensive Louisville area beer scene that has room for both Mile Wide and the return of Holy Grale; for Akasha and Sergio’s; and for places like NABC, which hits from both sides of the plate as a brewery and beer bar.