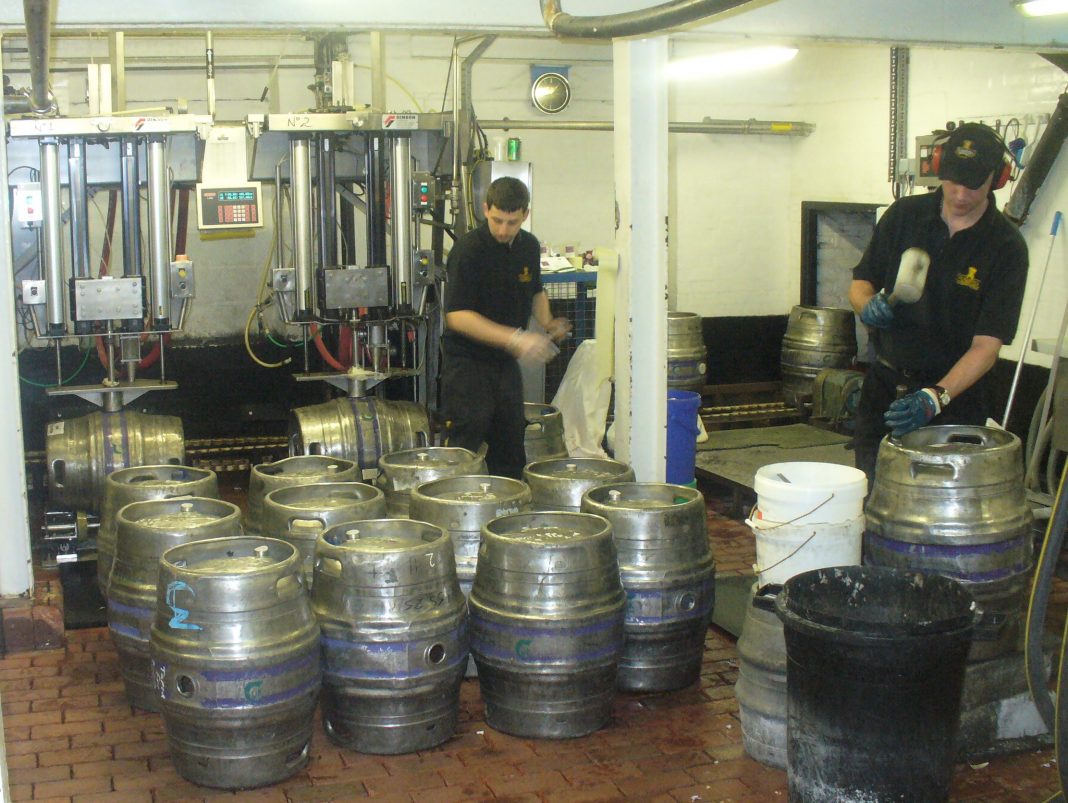 Even in the best of times, Great Britain’s traditional pub culture is the subject of fervent, impassioned debate. Will the nation’s glorious pubs survive changing tastes, injurious taxation and licensing regimes and the encroaching death knell of gentrification?

And what of the country’s singular approach to brewing, serving and drinking ale?

Obviously the pandemic has battered British pubs and breweries, with a third “lockdown” period currently in force. As one employed in the American bar business, knowing what’s we’ve gone through just to survive, it occurs to me how much more difficult coping must be for those pubs in Great Britain serving cask-conditioned “real” ale, a far more perishable product than our kegged beers here.

Coincidentally, at a beer training at work last week there was a question about cask ale. I was reminded of an F&D column of mine from 2009; with a bit of editing, it remains an adequate overview of the British ways of brewing, thinking and drinking. Sadly (at least to me) these immensely pleasing old-school notions won’t ever advance past a limited, niche status in the States.

Cask-conditioned real ale isn’t a tradition here, and in perfect honesty, a beer culture predicated on soda pop, hard seltzer and Michelob Ultra simply isn’t logistically set up for it. Any bar has the theoretical capability of tapping a firkin on the countertop and pouring it in the same way as a picnic jug of lemonade, but having a crowd-pleasing hand-pull apparatus requires investment, expertise and a brewery willing and able to provide the ale itself, not to mention an educational outreach to explain the process.

Today’s column idea struck me late Sunday evening, and I don’t get around town as much anymore, so I’m unsure about the current status of hand pulls in metro Louisville. The local establishments who were trying to do it 12 years ago, as mentioned in the column’s original context, have all ceased to exist, which is to say please let me know who is pouring hand-pulled, cask-conditioned ale in these parts, and I’ll update this column at a later date.

My wife’s cousin lives in Plymouth, England, and when we’ve been able to make trips in the past to visit her, a required stop is the Dolphin Inn.

It’s a harbor pub located a few yards from the very spot where the Mayflower left England for America, serving thirsty visitors who queue to drink draft Bass Pale Ale poured in a rigorously traditional and characteristically English manner.

The firkin, a keg of unique and purpose-built design, lies slightly tilted on its side in a cradle at room temperature. A wooden peg (spile) faces skyward, filling a hole that had been punched at tapping. A faucet, tapped into place with a rubber mallet, protrudes horizontally from the firkin. The onrushing ale is borne of gravity, dropping from the opened faucet into a waiting pint glass, cool but not cold, with minimal yet sufficient natural carbonation.

Perhaps the only nod to modernity is the use of stainless steel, rather than wood, to fabricate the firkin. Otherwise, it is likely that Plymouth’s publicans were filling tankards in like fashion four hundred years ago as the Pilgrims prepared for their voyage to the New World by loading their own barrels of ale onto the Mayflower.

The Dolphin decants its Bass in this simple, old-fashioned way, unpasteurized, and without the forced-pressure C02 system to which the world has grown accustomed, because the ale itself is naturally carbonated, or cask-conditioned, in the firkin by means of a secondary fermentation.

Although comparatively few English pubs follow the venerable example of the Dolphin’s gravity-pour method, many of them continue to vend one or more cask-conditioned ales with the help of a beer engine, colloquially referred to as a hand pump, or a hand-pull. Their firkins are stored in the coolness of the cellar, where they are tended and prepped for serving. When ready, the ale is pumped by the barman into eager pint glasses.

“Cask-conditioned” ale also is referred to as “real” ale, and those ales conceived, brewed, packaged and served in this natural manner are the indigenous, tasty, beery glories of the British Isles.

Disturbingly, real ale almost became extinct during the 1970’s, primarily because both then and now, conditioning ale in a firkin and serving properly at a pub is thoroughly old-school – time consuming, labor intensive and absent the sexiness of mass-market commoditization, the dictates of which demand industrially produced, cost-effective “dead” (artificially re-carbonated) ales and lagers in conventional kegs, bottles and cans.

Thanks in large measure to the advocacy decades ago of the Campaign for Real Ale (CAMRA), one the modern era’s most principled and effective consumer lobby groups, real ale’s decline has been arrested, even though many older brands and breweries have disappeared.

A vibrant new generation of smaller brewers committed to cask-conditioning has stepped forward to keep tradition intact, enabling us to consider “living” ale as a symbol of pre- and post-industrial life. It’s the way beer was done for thousands of years, and now, in the new millennium, real ale once again tells the story of slow food, green living and an appreciation of natural virtues in food and drink.

Historically, the stylistic range of England’s brewing output is relatively narrow: Mild, Bitter, IPA, Stout, Porter, Old Ale and Barley Wine still suffice to summarize most of what you’d expect to see at the pub, although these days there are Golden Ales and the occasional seasonal Wheat appearing in summertime (plus all manner of new-school hop-laden craft beers, some “real,” others not).

Apart from the rarer Old Ales and Barley Wines, the alcoholic strength of traditional English ale tends to be lower than one might expect, perhaps averaging around 4% abv.

Indeed, the English on-premise brewing ethos checks in at reasonable session strengths. In practice, perhaps 75% of the cask-conditioned ale pouring at any given time in England is Bitter, which is subdivided into designations that again pertain primarily to alcoholic strength: Ordinary, Best, Extra Special and the like. Alcoholic strength and rates of taxation are intertwined; consequently, expect to pay steadily more for a pint of ale as it escalates in alcoholic content.

At their finest, balance is the watchword for all English real ales, especially those quaffable Bitters, and cask-conditioning is more than a way of drinking. It’s a way of thinking. Flavors are subtle and even simplistic, yet unmistakably rendered. The malt character is rich and sweetish, with a touch of fruitiness. The classic English hop varieties are elegant, packing less of a bitter punch than their American cousins. The overall package is thirst quenching or contemplative, depending on one’s mood.

From start to finish, real ale requires effort and thought, especially for the publican charged with its care. Whether dispensed by gravity feed or hand pump, the clock begins ticking when the firkin’s seals are breached. Oxygen, the prime enemy of freshness, enters the firkin to occupy the head space as its volume is depleted. The carbonation recedes with time, and the ale becomes entirely flat. Oxidization produces unpleasantness, and the ale goes “off.”

There are two ways to avoid this outcome.

One is to drain the vessel promptly, with it being widely held that once tapped, a firkin has three days to be consumed before deterioration makes the contents undrinkable. For a pub doing a good trade, this certainly is achievable.

But if the firkins turn over too slowly, or if the publican desires a degree of certainty to assist in what can be a coin toss, there is another way: A gadget called a cask breather, which is a nipple inserted into the spile hole and attached to a tank of CO2. As the ale is pumped out, small bursts of CO2 are drawn inside the firkin – not enough to push the liquid as in conventional kegs, but merely to occupy the head space and keep the liquid fresh.

Some oppose cask breathers on traditionalist grounds. However, if the firkins can’t be turned over with predictable speed, it makes more sense to use a breather.

Cask-conditioned ales and the English pub are synonymous, and most readers of this publication are American, prompting the obvious question: How can one experience the joys of real ale in the States? Your best bet is to look first to the ranks of America’s craft brewers, and find out whether the nearest brewery offers cask-conditioned ale.

But my final bit of advice to those who find themselves smitten with real ale: Head for the source. Save your nickels, dimes and frequent flier miles. The best cask-conditioned ale is local, and centered in Great Britain. Buy CAMRA’s annual “Good Beer Guide,” pack light, and head into the countryside from Heathrow or Gatwick.

Order a pint of Bitter and a Ploughman’s Plate … and slow down.

(The cover photo was taken at the St. Austell brewery in Cornwall, England. This interesting link from 2019 surveys the state of cask ale in America: https://www.fsrmagazine.com/beverage/why-traditional-cask-ale-making-comeback).