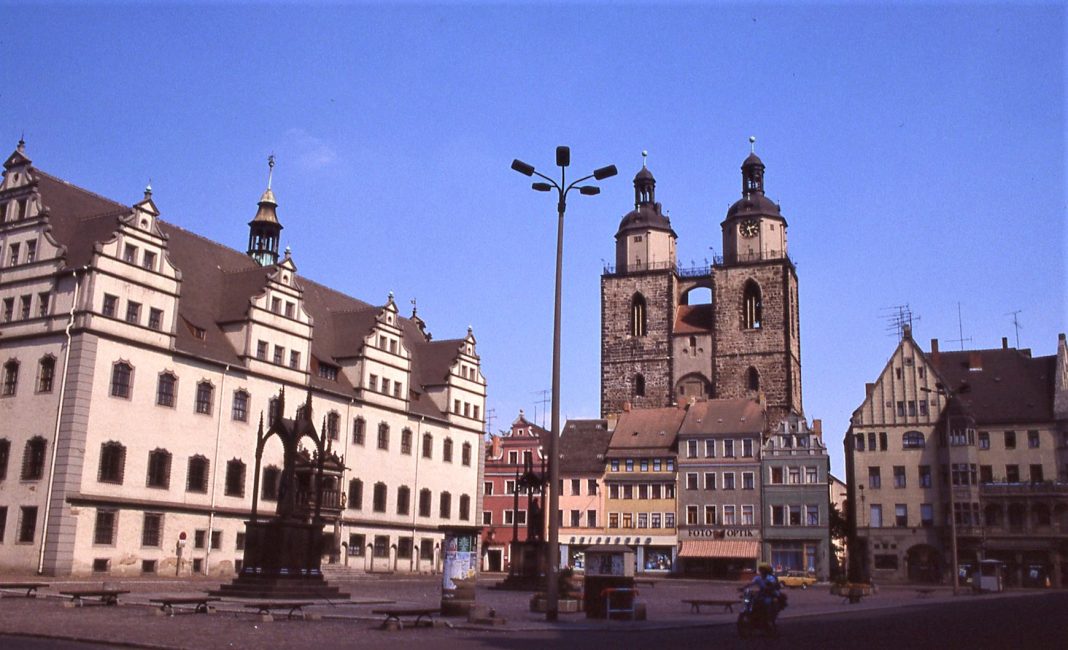 Regular “Hip Hops” readers will recall that Jeff Alworth is one of my favorite beer writers. Recently Alworth reprinted an article from November 1, 2017: ALWORTH’S 9.5 THESES.

It’s a playful riff on the 500th anniversary of Martin Luther’s “95 Theses,” as supposedly nailed to the church door in Wittenberg, Germany — presumably launching the Protestant Reformation.

Alworth and I agree on more than one proclamation.

Cask bitter is the most underrated beer in the world.

A pint of bitter, served fresh on cask, is surely one of the greatest achievements in beer. Its reputation, both in its native UK and elsewhere, ranges from misunderstood to meh. My greatest failure as a writer is evidenced by the paucity of casks at my local pub.

Evidently it’s my greatest failure, too. Does anyone in Louisville still so much as attempt to mimic cask ale?

As I was reading Alworth’s list, a song began playing in my head. Seems I’d written about Luther, too, roughly at the same time Alworth did four years ago, and for the same reason (the anniversary of the Luther’s theses). If you’re scratching your head in confusion, fear not; an explanation is coming.

On this day 500 years ago, an obscure Saxon monk launched a protest movement against the Catholic Church that would transform Europe. Martin Luther’s Protestant Reformation changed not just the way Europeans lived, fought, worshipped, worked and created art but also how they ate and drank. For among the things it impacted was a drink beloved throughout the world and especially in Luther’s native Germany: beer.

Actually no one knows for sure if Luther’s theses were revealed via that door on October 31, 1517, or whether he posted them in such a manner at all, but let’s not quibble over details.

As relayed by NPR, among other purely secular motivations of the Protestant Reformation (the “success” of which had far more to do with politics than theology) was the opportunity to hoist a middle finger to the Catholic Church’s monopoly on gruit, then the flavoring agent of choice in brewing.

In the 16th century, the Catholic Church had a stranglehold on beer production, since it held the monopoly on gruit — the mixture of herbs and botanicals (sweet gale, mug wort, yarrow, ground ivy, heather, rosemary, juniper berries, ginger, cinnamon) used to flavor and preserve beer. Hops, however, were not taxed.

At the time, hops had a bad reputation.

“The church didn’t like hops,” says William Bostwick, the beer critic for The Wall Street Journal and author of The Brewer’s Tale: A History of the World According to Beer. “One reason was that the 12th century German mystic and abbess Hildegard had pronounced that hops were not very good for you, because they ‘make the soul of a man sad and weigh down his inner organs.’ So, if you were a Protestant brewer and wanted to thumb your nose at Catholicism, you used hops instead of herbs.”

Sidestepping the reliability of Bostwick as a beer historian (it may be best not to mention Bostwick’s name to British beer writer Martyn Cornell), I couldn’t help thinking about Stephen Harrod Buhner while reading the NPR story.

Think of Buhner as the Garrett Oliver of mystic herbal brewing. One of his books is Sacred and Herbal Healing Beers: The Secrets of Ancient Fermentation (1998), which I dimly recall being recommended to me by one of the (shall we say) more left-leaning of homebrewing club members at the time. A few years ago, a friend pointed me to Buhner’s article about gruit vs. hops. Consider it a more detailed treatment of what Bostwick told NPR.

The Fall of Gruit and the Rise of Brewer’s Droop, by Stephen Harrod Buhner (2003)

… To understand why hops replaced gruit it is important keep in mind the properties of gruit ale: it is highly intoxicating and aphrodisiacal when consumed in sufficient quantity. Gruit ale stimulates the mind, creates euphoria and enhances sexual drive. Hopped ale is quite different. Contemporary scientific research has conclusively demonstrated that hops contains large quantities of estrogenic and soporific compounds. In fact hops has been used for many thousands of years in traditional medical practice as a natural estrogen replacement therapy and to help insomniacs sleep. The high level of plant estrogens in hops makes hopped beer an extremely good drink for women in menopause but also makes it a very bad drink for men. Consumption by men of large levels of estrogenic compounds can lead to erection problems later in life. In fact, there is a well-known condition in England called Brewer’s Droop which is regularly contracted by bartenders and brewers after years of exposure to hopped beers and ales.

Whether it’s Buhner’s or Bostwick’s research, I’ve no idea whether any of this is entirely reputable. I always thought it was the alcohol itself that contributes to erectile dysfunction, but strict veracity isn’t my point.

Rather, it’s the phrase “brewer’s droop” and how it was used by Dire Straits in the song that should be playing as you read these words.

Doctor Parkinson declared ‘I’m not surprised to see you here
You’ve got smokers cough from smoking, brewer’s droop from drinking beer
I don’t know how you came to get the Betty Davis knees
But worst of all young man you’ve got Industrial Disease

Brewer’s droop apparently has a double meaning, as it was the name of a band, too. But why was the name Parkinson used? I’m not entirely sure, but my best guess is Cecil Parkinson, who was one of Maggie Thatcher’s favorites at the time of the album’s incubation.

Downfall of Margaret Thatcher’s number one guy Cecil Parkinson; HE WAS the golden boy of the Conservative Party in the early Eighties, by Neil Clark (Express)

A favourite of prime minister Margaret Thatcher, Cecil Parkinson had as Tory chairman masterminded the landslide election victory over Labour in 1983. Handsome, charming and highly ambitious, he was the man who – as newly released private papers suggest – Mrs Thatcher wanted to anoint as her successor.

Unfortunately, Parkinson’s mistress turned up pregnant, and his star abruptly fell. No drooper, he — probably a wine drinker, and not in the habit of selecting fictional barrister Horace Rumpole’s Chateau de Thames Embankment, either.

Whoever drinks beer, he is quick to sleep; whoever sleeps long, does not sin; whoever does not sin, enters Heaven! Thus, let us drink beer!